T.S. Eliot and the Struggle of Faith

Nobel laureate T.S. Eliot made some of the most recognizable and well-respected contributions to the American literary canon. He is best remembered for poems like "The Love Song of J. Alfred Prufrock" (1915) and The Wasteland (1922), and his poetic efforts are often considered synonymous with the “high” modernist style of his time. Though less well known, T.S. Eliot also penned several plays—religious in nature—later in his career. They, too, are deserving of our attention, if for no other reason than for the insight they give us into the ever-searching mind of one of the greatest writers of the 20th century. 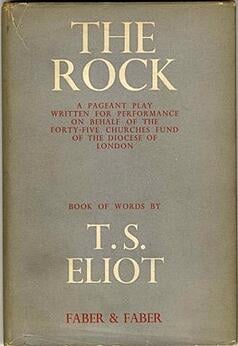 Eliot was nothing if not a seeker: seeking to reconcile the culture he saw with what he hoped it to be; seeking to reconcile an inner despair with a parallel want of faith. Thus, that Eliot went from writing poems like The Wasteland to religious plays like The Rock is an interesting trajectory. Though, after some reflection, it seems to make sense.

Eliot proved in The Wasteland his feeling of complete and utter despondence at the state of civilization, and more personally, at the state of his own failing marriage. His form mirrored his content, making the poem an incredibly dark read. Still, we see glimpses of a belief that an unnamed faith could perhaps be used to pull oneself and one’s society out of despair. Eliot references Christianity and the crucifixion of Christ in lines like He who was living is now dead/ We who were living are now dying. Yet, he seems to posit that any redemption is far away. Likewise, he ends the poem with references to Hinduism, though there is no resolution or closure, and the peace recalled is not revealed.

Following the publication of The Wasteland, Eliot continued writing poems like “The Hollow Men” that picked up where The Wasteland left off in critiquing the dismal state of civilization. But as we follow the trail of his subsequent publications, we can almost trace Eliot’s personal faith journey. We see him turn toward religious-based themes in much of his later works.

In 1927, T.S. Eliot converted to Anglicanism. He said in a preface to his collection of essays For Lancelot Andrewes (1928) that he was “classicist in literature, royalist in politics, and anglo-catholic in religion.” Eliot held fast to this faith for the remainder of his life. Still, in his writings, he continually wrestles with the difficulties of having arrived at any sort of belief system and with both the personal and societal ability to live out one’s faith. His works with religious undertones signify this struggle.

One primary example is his play, The Rock. Eliot wrote the text for The Rock as a pageant play to be performed at Sadler’s Wells Theatre in London from May 28-June 9, 1934 on behalf of the Forty-Five Churches Fund of the Diocese of London. Eliot’s tone is evidently more hopeful in this play than in The Wasteland. Still, he makes no bones about the difficulties facing the faithful, and their tendency to still grasp at the things of this world as opposed to looking toward the salvation to be found in the next. In the play’s choruses, he states:

All men are ready to invest their money
But most expect dividends.
I say to you: Make perfect your will.
I say: take no thought of the harvest,
But only of proper sowing.

We see in The Rock Eliot’s continual struggle with despair, despite his religious conviction, and the way in which he sought to reconcile faith and life. In conveying this struggle, the form of the play earned a resounding review from Francis Birrell in The New Statesman. He claimed, “'The Rock' is certainly one of the most interesting artistic experiments to be given in recent times."

Though the choruses of The Rock were published in his Complete Poems, limited copies of Eliot’s full text were issued. Collectors and students of T.S. Eliot would do well to acquire a copy to delve deeper into the mind of the man who gave voice to the Lost Generation.