Elie Wiesel wrote, “Write only if you cannot live without writing. Write only what you alone can write.” Wiesel followed his own advice in his writing. When reading his work, the author’s skill and passion for writing can be seen, and he writes about what he alone can write about. Knowing Wiesel’s experiences in the Holocaust helps readers to understand and appreciate his words and skill as a writer. With over 50 books, speeches, and interviews, it can be hard to narrow down passages to show Wiesel’s skill when there are so many wonderful examples. Nevertheless, here are 10 samples of Wiesel’s skill as a writer. 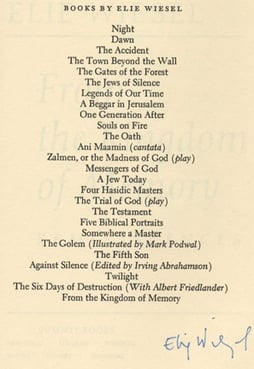 “There may be times when we are powerless to prevent injustice, but there must never be a time when we fail to protest.” —Nobel Lecture, 11 December 1986

“We must always take sides. Neutrality held the oppressor, never the victim. Silence encouraged the tormentor, never the tormented. Sometimes we must interfere. When human lives are endangered, when human dignity is in jeopardy, national borders and sensitivities become irrelevant. Wherever men and women are persecuted because of their race, religion, or political views, that place must - at that moment - become the center of the universe.” —Nobel Acceptance Speech, 10 December 1986

“There is divine beauty in learning…To learn means to accept the postulate that life did not begin at my birth. Others have been here before me, and I walk in their footsteps. The books I have read were composed by generations of fathers and sons, mothers and daughters, teachers and disciples. I am the sum total of their experiences, their quests. And so are you.” —“Have You Learned the Most Important Lesson of All?”

“When a person doesn’t have gratitude, something is missing in his or her humanity. A person can almost be defined by his or her attitude toward gratitude.” —Interview in O: The Oprah Magazine, November 2000

“For in the end, it is all about memory, its sources and its magnitude, and, of course, its consequences.” —Night

“For the survivor who chooses to testify, it is clear: his duty is to bear witness for the dead and for the living. He has no right to deprive future generations of a past that belongs to our collective memory. To forget would be not only dangerous but offensive; to forget the dead would be akin to killing them a second time.” —Night

“Which is worse? Killing with hate or killing without hate?” —Night

“Night is purer than day; it is better for thinking and loving and dreaming. At night everything is more intense, more true. The echo of words that have been spoken during the day takes on a new and deeper meaning. The tragedy of a man is that he doesn’t know how to distinguish between day and night. He says things at night that should only be said by day.” —Dawn

“There’s a long road of suffering ahead of you. But don’t lose courage. You’ve already escaped the gravest danger: selection. So now, muster your strength, and don’t lose heart. We shall all see the day of liberation. Have faith in life. Above all else, have faith. Drive out despair, and you will keep death away from yourselves. Hell is not for eternity. And now, a prayer - or rather, a piece of advice: let there be comradeship among you. We are all brothers. And we are all suffering the same fate. The same smoke floats over all our heads. Help one another. It is the way to survive.” —Night