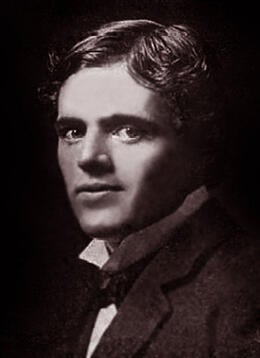 1) Jack London was born as John Griffith Chaney on January 12, 1876 in the slums of San Francisco.
His mother was Flora Wellman Chaney. His biological father, William Chaney, was never part of London's life, and it is unknown whether or not he ever legally married Flora. In September of 1876, just eight months after London was born, Flora married John London, Pennsylvania native and Civil War veteran of the Union army, who adopted Jack as his own. Consequently, John Griffith Chaney was renamed John Griffith London. He started going by "Jack" later in his childhood.

2) London's mother was a spiritualist and his biological father was an astrologist.
Flora Wellman came from a wealthy home in Massillon, Ohio. She believed she could communicate with the dead, a belief called Spiritualism that reached heights of popularity as she grew up in the 1840s. She also believed she could predict the future. When she was fifteen, the panic of 1858 destroyed her father's finances, and she left home. During the Civil War she was a volunteer with the Sanitary Commission, but nothing else is known about where and how she lived between the years 1860 and 1870. In the early 1870s she took up with William Chaney, a traveling astrologer, in Seattle, Washington. In 1874 the couple moved to San Francisco where Flora brought in money performing seances and teaching music, and William gave lectures on astrology.

3) While she was pregnant, London's mother tried to kill herself.
When William Chaney found out that Flora was pregnant, he beat her and demanded that she have an abortion. After the altercation, Flora attempted suicide twice in the course of two days. First, she overdosed on laudanum. When that attempt failed, she tried to shoot herself in the head, but her second attempt was thwarted by a gun malfunction. 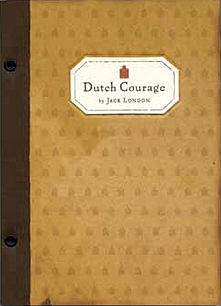 4) Flora and William's "domestic infelicity" was recorded in the San Francisco Chronicle.
The story of Flora Wellman Chaney's two suicide attempts was published in the June 4,1874 edition of the San Francisco Chronicle under the headline, "A Discarded Wife." The article turned locals against William Chaney to such an extent that some even wanted to see him hanged. Not long after the incident, William Chaney moved to Chicago and never acknowledged London as his son. He claimed Flora had other lovers, and that he himself was impotent.

5) London's foster mother was a former slave named, Virginia Prentiss.
After his birth, Virginia Prentiss took the infant Jack London into her home because Flora didn't want him and was too sick to care for him. Later in his infancy Jack went back to live with Flora, but Virginia Prentiss remained a significant maternal figure throughout his life. The Londons and the Prentiss family lived near each other in Oakland, California throughout London's childhood.

6) Jack London was a 15-year-old oyster pirate.
As a fifteen year old, London became tired of his grueling, low-paying job at a cannery (where he worked 12-18 hour days), and borrowed $300 from Virginia Prentiss. With the money he bought a sloop, which he called the Razzle Dazzle, and became an oyster pirate, or poacher, on the San Francisco Bay. After a few months, his boat became irreparably damaged and London was hired by the California Fish Patrol.

7) At the age of 18, London was arrested for vagrancy.
In 1894, London joined a group called Kelly's Army, a throng of unemployed men dubbed tramps and hobos, who set out from California riding the rails. Kelly's Army was part of a larger group of protesters known as Coxey's Army, which originated in Massillon, Ohio. The goal of Coxey's Army was to march on Washington D.C. and protest unemployment. London split from the group in Missouri and traveled to Niagara Falls where he was arrested, charged with vagrancy, and kept in jail for a month. He would later recount the events of Kelly's Army and his arrest in his autobiographical narrative, My Life in the Underworld. 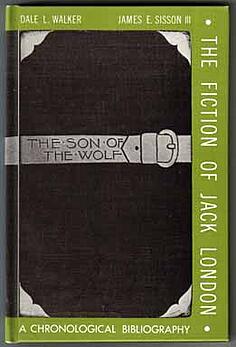 9) London wrote 1,000 words every day.
While toiling in the gold fields of the Klondike, London became severally malnourished and lost several of his front teeth to scurvy. His failing health forced him to return home. When he returned to California in 1898, he was met with the news that his step-father, John London, had died. He decided to dedicate himself to professional writing in order to support his mother. From that moment on, he made it his discipline to write 1,000 words every day.

10) Jack London died at the age of 40.
Jack London struggled with his health his entire adult life, due in large part to alcoholism. In 1913, London's doctor discovered that his kidney's were failing, and London began taking morphine to help control the pain. He died at his California ranch on November 22, 1916. His cause of death was a combination of uremia and morphine poisoning. It has been debated among biographers and scholars whether the morphine poisoning was intentional by London.