Books are their own little world, and no writer has taken this to heart quite like J.R.R. Tolkien. Through Middle-Earth, the British author imagined a land of such history and vastness that, although he has many imitators, Tolkien still has no equal. Beyond the billion-dollar films and merchandise, Tolkien has left behind an expansive bibliography which can take even the most serious collectors time to navigate. It’s not quite as hard as learning Elvish, but building the perfect Tolkien library requires a bit of enthusiastic study. Here's a look at ten magnificent items for a Tolkien collection.

Songs for the Philologists With only fourteen known extant copies, Songs for the Philologists is a book for the most dedicated and adventurous of Tolkien collectors. Before the famous Inklings, Tolkien founded The Viking Club at the University of Leeds, in which members would quaff ale, talk literature, and compose songs and poems—often in arcane languages like Old English and Latin. The book contains thirty works, nearly half of which were written by Tolkien, who would later repurpose some of them for his Lord of the Rings.

Published in 1964, this book includes two works by Tolkien which help to illuminate the philosophies, struggles, and missions of the author in his works. An essay, entitled “On Fairy Stories,” is an eloquent defense of the mythical and fantastic worlds Tolkien creates in his fiction. Much like the aims of the magical realists of Latin America, the author sees fairy stories as a way to distort the normal world, estrange us from it for a moment, so we may begin to see it again, wondrously rich and new.

The Lord of the Rings Trilogy 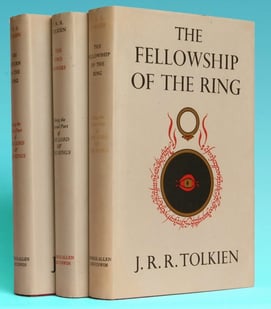 It is perhaps a fool’s errand to try to engender more enthusiasm for the second best-selling novel of all time (following only Dickens’ A Tale of Two Cities). With over 150 million copies sold since its 1954 publication, The Lord of the Rings is a colossus of popular literature, appearing on bookshelves all over the globe. Still, finding all three volumes of the first edition in great quality is no simple task. A trilogy in impeccable condition is not something Tolkien collectors let pass by without a little pain.

Published in 1922, the Vocabulary is Tolkien’s first book. Ever the lover of language, this glossary was much-respected by his colleagues at the same time it made Middle English easier to understand for the average reader. Tolkien’s focus on the “ordinary machinery of expression,” rather than impressive, obscure words, presaged the writer’s contagious enthusiasm for centuries of British history and culture.

The Adventures of Tom Bombadil 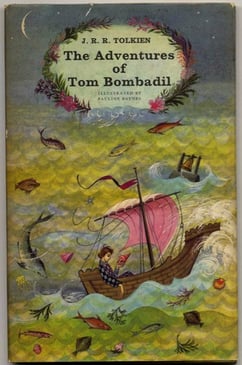 This book of sixteen poems shows just how playful Tolkien was wont to get. We get stories of Tom Bombadil, the beloved Fellowship of the Ring character and lamented cinematic omission. There’s also stories of oliphaunts, trolls, and other poems that can be found as verses in The Lord of the Rings.

Aside from Middle-Earth and his academic work, Tolkien was responsible for some lesser-known narratives. Among these is the satirical Farmer Giles of Ham, which pokes fun at the typical narrative of chivalry and courage. In this book, the knights are vain and ceremonious, while the protagonist is but a farmer whose clumsy shot from a blunderbuss makes an accidental hero of him. We know how Tolkien elevated medieval myth, but it’s just as good to see him having parodied it.

The History of Middle Earth 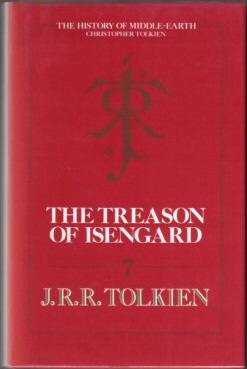 Tolkien left behind a trove of papers upon his death, outlining the vast histories, figures, and languages of his Middle-Earth. These writings were collected and edited by his son Christopher to create these twelve volumes illuminating the depth of Middle-Earth that his many books failed to convey. If you can’t get enough of Tolkien’s prodigious imagination, these books are sure to keep you sated for a little while.

Beowulf: The Monsters and the Critics

In 1936, J.R.R. Tolkien delivered his famous lecture on Beowulf to undergraduates at Oxford. The lecture aimed to liberate the Old English epic from the tradition of criticism that relegated it to a mere historical document. Instead, Tolkien insisted, Beowulf was a work of art and should be studied as such, citing the aesthetic strengths of Grendel and the dragon. For the interested collector, one should consider a pamphlet published by Humphry Milford in 1937, of which only 500 were printed. 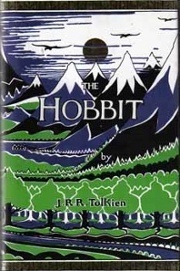 How could anyone miss the book that started it all, the beginning of Tolkien-mania as we know it? Published in 1937, the story of Bilbo Baggins and the journey to the Lonely Mountain has captivated generations, as both a bedtime story and massive blockbuster. First edition copies of the book are rare, and can fetch tens of thousands of dollars. One volume, sold at auction in June 2015, was signed by Tolkien himself and went home to its happy bidder for over $200,000.

The Children of Húrin

One of the most recent additions to the Tolkien canon (released in 2007), has its origins in the author’s writings dating to the 1910s. This book takes us to some of the earliest parts of the chronology of Middle-earth, taking place in the First Age, presenting the dawn of men and the earliest villains, with Morgoth as the chieftain of evil. The book was edited with the help of Christopher Tolkien, and comes with art by longtime Tolkien illustrator Alan Lee.

Like our libraries, may the size of Middle-earth be perpetually expanding.