Throughout his career as a writer, Walter de la Mare created many works for audiences of all ages, from poetry to prose to literary criticism to anthologies. He collaborated with other authors, including Rudyard Kipling to produce St. Andrews, Two Poems. Much of de la Mare’s work focused on themes of dreams, death, and emotion with an emphasis on creating a feeling of transcendent reality through a dreamlike tone, showing the importance de la Mare places on imagination.

1. And some win peace who spend

The skill of words to sweeten despair

Of finding consolation where

Life has but one dark end:

Who, in rapt solitude, tell o’er

A tale as lovely as forlore

Into the midnight air. – The Riddlers

I shall always be

Our dreams are tales

We wake and whisper a while,

But, the day gone by,

Of amaranth lie.” – All that’s Past

No bond of life hath then,

Nor grief of death. – When the Rose is Faded

5. A harvest moon goes scampering by,

With silver claws and silver eye;

And moveless fish in the water gleam,

By silver reeds in a silver stream. – Silver

And when I crumble, who will remember

This lady of the West Country? –An Epitaph

7. Look they last on all things lovely,

Seal thy sense in deathly slumber

Beyond all dreams to restore,

I from the roots of the dark thorn am hither,

And knock on the door.” –The Ghost

9. For beauty with sorrow

Is a burden hard to be borne:

The evening light on the foam, and the swans, there;

10. His are the quiet steps of dreamland,

His ram’s bell ring ‘neath an arch of stars,

Interested in the connection between poetry and children's literature? Read on!

Writing poetry and writing for children have something very important in common: both endeavors are much more difficult than they look. The brief form, the broad appeal, and the creation of language that is as pleasing to the ear of a child as it is to the ear of a publisher: these are the challenges of the poet who writes for the young and the young at heart. This is a list of those who have made the effort and come forth triumphant and, perhaps, who also inspired future poets and writers.

A statistics clerk for the Anglo-American Standard Oil Company seems an odd occupation for a man who would go on to write delightful poetry for young children, but that is precisely what Walter de la Mare did, and thanks to his government pension, he was able to write full time after his work was done.

Naturally, he was not only a poet for children; he also wrote disturbing horror stories such as "Seaton's Aunt" and "Out of the Deep". He was the first to create a collection of stories that won the annual Carnegie Medal from the Library Association, which is reserved for English writers who produce children’s books.

One of the many pitfalls prospective children’s authors have is that they think that their work needs to be simpler or less complex than the work for adults. As de la Mare described, nothing could be further from the truth, and the child’s mind is startlingly complex and vivid. He described two “types” of imagination, the “childlike” and the “boylike”, believing that true literary geniuses lay at the border between the two. He saw children as the true visionaries, unhindered by the context of adulthood. Once the “real world” is introduced to the childlike mind, he becomes that of a boy and sees the world still with that imaginative lens, but with the ability of analysis and the advantage of education. It is the true visionaries, de la Mare declared, that were able to allow their imaginations to survive the brutal transition into adulthood. With this imagination in tact, and his full awareness of the needs and abilities of the minds of children, Walter de la Mare wrote to them and for them with great success. 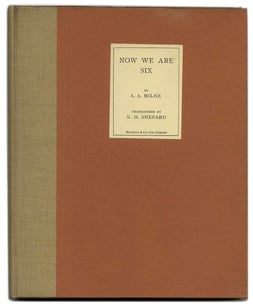 Best known for his depiction of his son’s playthings, and therefore the co-creator of Winnie-the-Pooh and his friends in the Hundred Acre Wood, Milne also wrote two books of poetry for children: Now We Are Six and When We Were Very Young. In both collections, Pooh and Christopher Robin make appearances, but the poems themselves represent and mirror the true experience of childhood.

His given name was Alan Alexander Milne, and he was born in London, England and studied mathematics before discovering his true ability and passion for writing. Much of his initial work was funny, satirical, and, during his military service, theatrical. In the 1920s, he continued writing plays, many that were original and well received, as well as an adaption of The Wind in the Willows.

Fatherhood provided him with an exciting new muse. For and about his son Christopher, Milne wrote his two collections of poems, describing the world as he believed his son saw it. It was these collections, written at about the same time as Winnie-the-Pooh and The House at Pooh Corner, that made him and his characters part of the cultural narrative. He continued writing long after they were published, mainly books for adults, including a book entitled Peace with Honour, which spoke about his adamant passivism, and an autobiography titled It’s Too Late Now. Read more >>