Some authors have birthdays — others have holidays. Roald Dahl belongs to the latter category. The beloved children’s author’s September 13th birthday has become something of a celebration, a way for parents and children alike to appreciate the stories and creative gifts of a remarkable children’s author. His work, manifested in the likes of Matilda, Charlie and the Chocolate Factory, and James and the Giant Peach, has captivated countless children for over half a century. Dahl’s stories are undoubtedly lovable and cherished. The man himself, however, was far more complex.

A Life of Tragedy 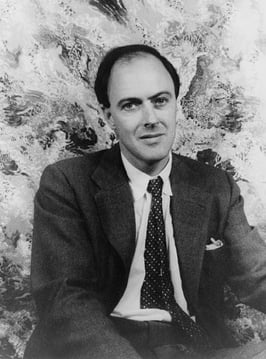 The epicenter of Roald Dahl Day is the Roald Dahl Museum and Story Centre, a children’s museum based in the Buckinghamshire village of Great Missenden, where the author spent the final 36 years of his life. The museum is closely tied to Roald Dahl’s Marvellous Children’s Charity, which is dedicated to helping care for sick children. Dahl contributed a good deal of money to this cause, and a charitable function was set up in his estate to assure the giving would continue. Dahl's crusade against the tragedy of childhood illness had unfortunate roots in his own life.

When Dahl was three, his older sister passed away. She was followed by his father, who was heartbroken and died weeks later. Decades later, his own daughter would die of complications from measles at the age of seven. A personal letter by Dahl about this difficult period went viral last year. The author would forever be an ardent proponent of childhood vaccination, knowing well the heart-wrenching consequences of infectious disease.

His son, too, nearly died. As an infant, a New York City taxi struck Theo Dahl’s carriage, sending it forty feet before it crashed into a bus. His skull was fractured, and he barely survived. In the middle of this trauma, Dahl pulled off a remarkable feat, both as a thinker and as a grieving father. He helped invent the Wade-Dahl-Till valve, a medical device designed to mitigate the dangers of hydrocephalus, or a build-up of spinal fluid in the brain. The valve was cheap and effective enough that it was later used on thousands of children. Not bad for a writer of children's stories.

In knowing tragedy and misfortune intimately, Roald Dahl was obliged to in corporate it into a philosophy of life. Dahl, as a pilot in the Royal Air Force in World War II, crash-landed his plane in the desert. He fractured his skull and the flames from the crash rendered him temporarily blind. He was lucky to survive, and took a good deal of time to recover. But he was able to put a felicitous spin on his suffering:

“I doubt I would have written a line, or would have had the ability to write a line, unless some minor tragedy had sort of twisted my mind out of the normal rut.”

Roald Dahl originally hoped to be an esteemed writer of “serious” fiction, so he wrote about adults, for adults. His short stories were featured in Harper’s, the New Yorker, and even Playboy. It was only when he had children of his own, and took inspiration from the act of reading bedtime stories, that he began to write his most successful work.

Yet as a children's author, many will agree there's something unusual about Dahl. His early success was almost entirely dependent on the American market — for years publishers in his native Britain refused to publish books like James and the Giant Peach, unable to see how his stories would possibly appeal to children. Indeed, Dahl's stories do have components which are unusual to encounter in the genre. There is the titular character's abject poverty in Charlie and the Chocolate Factory, as well as the harsh, near-fatal fate dealt out to the disobedient children. And his final and beloved novel Matilda began much less sympathetic to its protagonist, who was culpably unruly and mischievous. It was his editor that changed this around, making the story (and character) that we all know and love today. The grotesque and tyrannical adults, of course, were preserved.

While we like to think of the ideal children’s author as a kind of gentle bulwark against the ugliness and dreariness of the adult world, Roald Dahl was too complicated for such classification. He had his share of ungraceful traits, too. He was a man of his times, and was prone to all the social myopia and snobbery that a patrician, British mid-century man could be expected to hold. He dabbled in opinions and comments that contained touches of misogyny, anti-Semitism, and intolerance. He infamously said that there was something unsavory about the Jewish character, and that “there is always a reason why anti-anything crops up anywhere; even a stinker like Hitler didn't just pick on them for no reason.”

Dahl held other views that would be considered scandalous today. Here he is on the natural order of women:

“There's one group of spiders where the female is so fierce that the male has to weave a web around her and wrap her up and as it were handcuff her before he can mate her - which is wonderful, I think. You could apply that to some females of the human species."

Dahl also threw very public fits and was notoriously difficult to get along with. He was once reprimanded by his publishers at Farrar, Strauss, and Giroux. His editor wrote: “you have behaved to us in a way I can honestly say is unmatched in my experience for overbearingness and utter lack of civility.” The rest of letter continued in this vein, and when it was sent, it is said the entire publisher's office applauded.

Dahl found quite a few arenas in which to be unsympathetic. His first wife once recalled a moment from their first date, in which Dahl spontaneously said over their dinner that he “would rather be dead than fat.”

How do we make sense of this man — the inventor, the philanthropist, the bigot, the storyteller? To do so would be impossible, and quite fruitless. Roald Dahl was capable of both behaving unkindly and with supreme generosity. We may never know how such contradictions were possible in a life. Yet what we do know is that Raold Dahl’s books are at the center of that glorious achievement for a children’s book: to captivate a child with the same story that once mattered to her parent. Dahl’s books have an inter-generational and magical bond to them, and that is what we celebrate on Roald Dahl Day.