On July 16, 1969, the Apollo 11 crew left Kennedy Space Center and entered the Moon's orbit. On July 19, after spending a full day in lunar orbit, astronauts Neil Armstrong and Edwin "Buzz" Aldrin, Jr. boarded the lunar module. It was not an easy decent to the surface of the Moon, but when they landed, they made history. 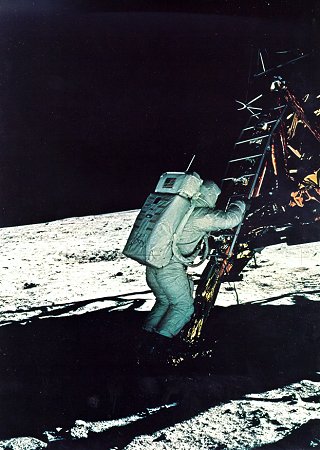 On July 20, Armstrong climbed down the ladder from the lunar module and became the first person to set foot on the Moon. At that moment, he spoke one of the most famous quotes of all time:

"That’s one small step for man, one giant leap for mankind."

But how spontaneous were these immortal words?

Armstrong asserted that he coined the phrase while on the Moon, a claim backed by biographers of the astronaut. However, his brother, Dean Armstrong, has stirred controversy in recent years by stating that Armstrong did not spontaneously come up with the phrase, and instead created the quote months before the Apollo 11 crew left Cape Canaveral.

According to Dean Armstrong, his brother wrote the quote on a piece of paper and handed it to him to read for approval. Dean revealed this information three months after Armstrong's death in 2012, and he said the astronaut was not forthcoming about the origins of the quote because he didn't want it to detract from the mission of the Moon landing.

Despite Dean's revelations, analysis suggests the quote was spontaneous because Armstrong's movements parallel the words he speaks. As one biographer put it, "He says his first word 'that's' at the moment he puts his foot on the ground. When he says 'one giant leap for mankind', he moves his body. So it's for all those reasons that we think this is a completely spontaneous speech."

The astronaut's specific wording has also inspired debate because of a missing article.

Although Armstrong insisted that he originally said, "that's one small step for A man," linguistic research of the Moon landing recordings says otherwise. Dr. Chris Riley, author of the book Apollo 11, An Owner's Manual, said that analysis shows Armstrong pronounced his 'a's in a unique way, but that he did not make the sound during the moon landing.

The inflection the researchers heard indicates that Armstrong had an understanding of the difference between the singular "a man" in comparison to mankind as a group.

In 2006, an Australian linguistic team analyzed recordings, both from the landing and of Armstrong after the mission, and found that Armstrong did utter the "a."

All grammatical controversy aside, the quote still embodies the spirit of discovery in 20th century history, and the lunar landing was indeed "one giant leap for mankind."

Sky News released this video just over 10 years ago, in honor of the 40th anniversary of the lunar landing: