William Styron's account of The Confessions of Nat Turner differs significantly from the original Confessions of Nat Turner garnered by Turner's lawyer while he awaited his trial and impending execution. Because of this, the fact of whether it is historical-fiction or historical-fiction, is not an irrelevant minutia. Cries of controversy—that Styron is a racist or that he minimizes the genuineness of the Nat Turner Rebellion—depend wholly on how the reader approaches the text through the lens of it's emphasis. 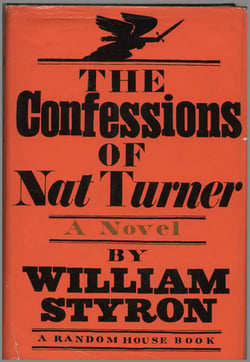 Richard Gilman, in a 1968 book review for The New Republic, only a year after the original release of The Confessions of Nat Turner, wrote:

"Nat Turner is in no real sense 'historical' fiction of the kind we are familiar with (such fiction, if it works as literature, has, I might add, no more connection with history than the wish to use it as pretext) but fiction with a tragic and religious impulse and ambition, and how in failing to realize its ambitions it ends in almost full literary failure."

Gilman touches on the critical problem behind the reactions of those who were upset about the book's content and its treatment of the rebellion and it's constituent members: it is easy to see the religiously fanatic, lusting, and murderous Turner of Styron's novel as a rather unfortunate and often times racist depiction of a black slave—this is especially true when considering that the historical figure was highly educated and had far more traditional Christian narratives to explain his motivation.

These problems force us to ask what the historical account behind Styron's work is. Because, if there is enough of a difference, then these cries of racism dissolve under the pretense of fiction. Instead of forcing tropes onto a real person, Styron would be creating a character that can fit any characterization he likes.

The confessions of Nat Turner written by Turner's lawyer tells a much simpler story than Styron's. Turner first describes his early life, the roots of his religious motivation, and then moves to confess all the murders he witnessed during the rebellion.

The religious account Styron gives in his novel is exaggerated—Turner discloses an account of a desire to overthrow an oppressor and help bring about the end when the promise of the first becoming last and the last becoming first would be fulfilled: a motivation history was not unfamiliar with.

In the confessions penned by Turner's lawyer, Turner never confesses to having hated whites from his childhood as he does in Styron's account, and in fact, he praises one of his masters for having treated him so well. There is no account of a white female with whom Turner is in love and thus no parallel to the final tragedy of Styron's Confessions. All of these dissimilarities, however, only matter if the historical is emphasized. Styron is clear that his novel is not meant to be an historical account, remarking that the book, "satisfied my ideal for a novel," and was an attempt to, "expose the horrors and evils of slavery." Throughout the book there is ample evidence to explore the character Nat Turner and what might motivate him towards the things he does in the novel. No fictional envisioning is required to understand the historical Nat Turner: his own Confessions provide ample explanation.

Styron admitted thirty-one years after Nat Turner's release: "Basically it is a very politically incorrect book written by a white man trying to seize his own interpretation and put it into the soul and heart of a black man." There are obvious problems with his depiction of blacks in the novel, ones that he apparently acknowledged.

But that doesn't mitigate the fact that as a fictional narrative loosely based on a historical event, The Confessions of Nat Turner is moving and indeed an effective exploration of a character's motivations and the horrifying nature of slavery in America. Styron's Nat Turner, then, can be viewed as merely inspired by the events of the Nat Turner Rebellion and moreso an exploration of the effects of slavery on the individual.