We often wonder at, marvel over, and debate the inspiration behind great works of literature. Is Philip Roth's work autobiographical in some cases? Was there an actual "Uncle Tom" figure who inspired Harriet Beecher Stowe? And so on. In the case of Moby Dick, Herman Melville's personal whaling experiences as well as accounts of the whale, "Mocha Dick," undoubtedly played a role in the novel's composition. However, one tale in particular must have had particular resonance. After reading the story of the doomed Essex, a whaling ship from Nantucket that came face-to-face with a seemingly deranged whale, Melville set out with fervor to pen his masterpiece. While Melville’s tale culminates with the attack of the long-sought Moby Dick, for the captain and crew of the Essex, their encounter with a massive, dangerous whale was only the beginning. The story of the Essex is a haunting one, and it’s bound to make even the heartiest of seafarers shudder.

The Essex was captained by George Pollard Jr. At the age of 29, he took his crew out from Nantucket to hunt sperm whales for their oil. In total, the crew numbered twenty men. After setting sail in 1819 and finding the waters off of South America devoid of adequate fish, they headed for the South Pacific where they had more success. Over a year into what was supposed to be a two year excursion, the Essex had had what could only be described as a prosperous voyage. That all changed in November 1820. 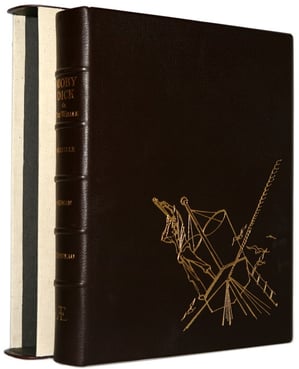 While the majority of the crew was out harpooning, first mate Owen Chase had stayed behind on the Essex to patch his harpoon boat. He spotted a large whale lurking in the waters in the distance. As Chase recounted (in his detailing of the events, the same one which Melville read), it made directly for the ship and rammed it head on. Following the initial jolt, the crew who remained on the Essex with Chase were assessing the damage and soon realized that they were being targeted again. The whale hit the bow of the ship and then disappeared. The damage was catastrophic, and the Essex was soon useless. Captain Pollard saw the distressed vessel and returned to it, stunned. The crew had barely enough time to gather bread and supplies before the Essex sank.

Pollard and company then tried to come up with a plan. The captain wanted to head toward what he thought was the nearest group of islands. But, he was dissuaded when Chase argued that they were populated with cannibals. This would prove gruesomely ironic.

The men ended up steering south in their three, twenty-foot harpoon boats. They ran into trouble almost immediately with both weather concerns and attacks from other whales. Although they made it to an island, it proved to be barren. Three of the crew opted to stay and take their chances. The others sailed on. Their bread — after being spattered with salt water — was making them more dehydrated, and all the supplies were soon gone. Eventually, the three boats were separated.

Some men went mad due to the heat and exhaustion. After one crew member died, Chase recounts how the remaining men, “separated limbs from his body, and cut all the flesh from the bones; after which, we opened the body, took out the heart, and then closed it again—sewed it up as decently as we could, and committed it to the sea.” They then roasted the organs and ate them.

Eventually, the crew started casting lots to determine who would be killed off to serve as sustenance for those remaining. Aboard Captain Pollard’s boat, his young cousin was selected. Although Pollard reportedly offered to take his place or kill anyone who tried to lay a finger on his kin, Owen Coffin accepted his fate and became the next sacrifice for the crew.

In February 1821, Chase’s boat saw another whale vessel and managed to attract its attention. The men aboard Chase’s harpooner were rescued after 89 days. For Pollard, it would be another week before his boat was spotted by the American vessel, the Dauphin. Accounts of the rescue of Pollard and his only remaining crewman, Charles Ramsdell, are disturbing. The two were so disoriented and skittish upon seeing their rescuers. They merely turned to the bottom of their own boat, where they had kept the bones of the rest of the crew, and continued feverishly sucking at the bone marrow.

In total, eight men survived. The men who elected to stay on the island managed to sustain themselves for almost four months and were eventually rescued. Those in the third boat all perished.

Captain Pollard relayed the haunting events to a group of captains and a missionary shortly after his rescue, but reportedly explained that his “head [was] on fire at the recollection.” We know the history of the Essex and its crew thanks to first hand written accounts, most notably by Owen Chase in his The Wreck of the Whale Ship Essex, published first in 1821. An account of the misadventure was also recorded by Thomas Nickerson, who had been a cabin boy aboard the Essex. Nickerson’s account was only just discovered in 1980. As gruesome as the tale is to hear, we must be thankful for these first hand accounts.

Melville certainly was. The author met Captain Pollard after writing Moby Dick, when he first visited Nantucket for himself. He described Pollard as “the most impressive man, tho’ wholly unassuming, even humble—that I ever encountered.”