The Origins and Legacy of Winnie-the-Pooh

Winnie-the-Pooh was formally introduced to the world on October 14, 1926. And in nearly ninety years since Winnie-the-Pooh was published, this beloved bear has gone from a mere character in a bedtime story to the engine of a $5.5 billion per year franchise. A.A. Milne’s ursine creation is known internationally from TV and film adaptations, plush toys, and about every item of merchandise one can imagine. In April of this year, plans for a live-action Winnie-the-Pooh film were announced, proving that the appeal of this honey-loving bear isn't slowing down anytime soon. 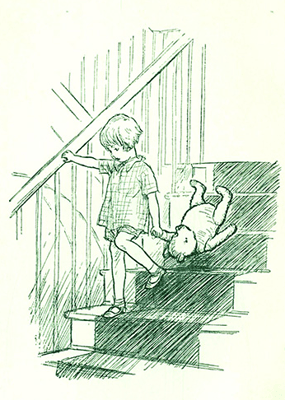 Pooh did not garner such success overnight. In fact, the character’s very origins occurred quite gradually. Pooh’s first incarnation came from the poem “Teddy Bear,” (1924). Rather than "Winnie," A.A. Milne called this anthropomorphized character “Mr. Edward Bear.” The famous "Winnie-the-Pooh" moniker would come later — inspired by Pooh, a swan featured in a different Milne poem, and Winnie, a bear in the London Zoo himself named after the Canadian city of Winnipeg.

The inspiration of Winnie-the-Pooh and the other adorable creatures of the Hundred Acre Wood came from Milne’s son, Christopher Robin, and his menagerie of stuffed animals. The teddy bear behind Winnie was purchased at Harrods in 1921, for Christopher’s birthday. From this collection also came the characters Eeyore, Piglet, and Kanga, who became Winnie-the-Pooh’s cherished companions. Tigger, that exuberant bouncing cat, was introduced in the sequel, The House at Pooh Corner (1928). Christopher Robin’s stuffed animals can still be viewed today at the Main Branch of the New York Public Library.

While Winnie-the-Pooh has captivated generations of children as a bedtime story, perhaps nothing has contributed to the characters international reach as the Disney corporation, who acquired the rights to Milne’s creation in 1961. Yet even before Disney, Winnie the Pooh was an astonishingly lucrative piece of intellectual property.

First acquired by Stephen Slesinger in the 1930s (a man who also had the rights to Edgar Rice Burroughs’ Tarzan), Milne’s creations were able to generate tens of millions of dollars in revenue. Slesinger was a skilled merchandiser, and used Pooh’s likeness for thirty years, centering radio programs, films, and board games around the character. He was also responsible for adding color to Winnie-the-Pooh, who had previously only been sketched in the illustrations of E.H. Shepard. We can thank Pooh’s licensors for giving us that iconic iteration of him: the adorable, soft-spoken, yellow, and red-shirted bear. 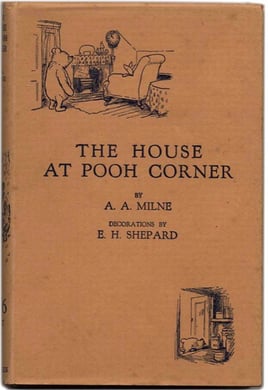 Speaking of the red shirt, most people ought to know that Pooh has no pants. To most of his fans, the clothing of a fictional cartoon has been an issue that understandably does not matter. But in November of last year, Poland gave us one of the strangest instances of literary censorship in recent memory. The likeness of Winnie-the-Pooh was banned from the logo of a playground. In the decision, councillors in Poland cited his inappropriate wardrobe, as well as the dubious sexuality of the bear. One legislator criticized Pooh because it "doesn't wear underpants because it doesn’t have a sex. It's a hermaphrodite."

Most of its audience, however, has more affection than umbrage for Winnie. In fact, Winnie-the-Pooh continues to stay exceptionally relevant today. The first non-Milne book, called Return to the Hundred Acre Wood, was released in 2009, making it the first Winnie-the-Pooh book published since 1928. With a new film in the works, and with billions of dollars in annual revenue, Winnie-the-Pooh remains the third largest franchise in the world, following Disney Princesses and Star Wars. After ninety years, even Harry Potter would be lucky to be so consistently adored.

But what’s behind such commendable success? It’s hard to say — perhaps great storytelling, with a little bit of marketing, and a dash of childhood magic thrown in, too.