The Library of Congress and Rare Books 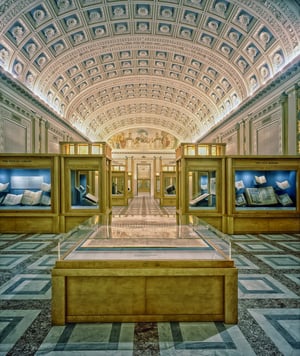 The Briefest History of the Library of Congress

The Library of Congress identifies itself as the “oldest cultural institution in the nation’s capital.” It was created in 1800 as a legislative library, designed to house materials and documents related to lawmaking in the newly founded United States. Thomas Jefferson, one of the original drafters of the U.S. Constitution who also founded the University of Virginia, is credited as the principal founder of the Library of Congress. While there are reasons to admire the work of Jefferson and some of the other founding fathers, it is also important to keep in mind that Jefferson, like many others like him, enslaved more than 600 people at his home of Monticello in Charlottesville, Virginia. As you think about the history of the Library of Congress and who can learn from its holdings, it’s important to consider the violence upon which all legal and cultural institutions in the U.S. were founded, and the various people who were excluded from its spaces for centuries. The Smithsonian National Museum of African American History and Culture refers to the “paradox of liberty” that surrounds Jefferson’s personal and political histories.

In its early years, the Library of Congress certainly didn’t serve as a research library for literature scholars or rare book collectors. Given that the Library of Congress began as a legislative library, it largely held documents pertaining to the creation of American law which, as we mentioned ever so briefly above, excluded those who were not white and male. As time passed and the library grew, it began to house more collections related to the development of American culture. Indeed, in the nineteenth century, the holdings developed. Yet it wasn’t really until the end of World War II that the Library of Congress began establishing the marks of the great research institution that it is today. 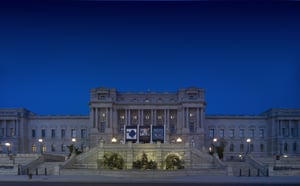 How to Conduct Research at the Library of Congress

What should you do if you want to conduct research at the Library of Congress? Although the library is closed to the public at the time of writing this piece due to the coronavirus pandemic, under different circumstances researchers can make plans to visit particular rare book collections. There is a main reading room to explore archives and individual holdings, and researchers can gain access to domestic and international collections held by the library. In total, the Library of Congress has collections and archival materials in more than 470 languages.

If you want to make plans to see the library, you can visit its website for updates concerning public visits. While the primary function of the Library of Congress is still “to serve the Congress,” researchers can make appointments to view specific resources.

The Library of Congress houses hundreds of notable literary archives and objects—we couldn’t possibly name them all for you here. Two of our favorite collections, though, are the Hannah Arendt Papers and the Ralph Ellison Papers.

Beyond larger scale author collections, the Library of Congress also holds a wide variety of individual materials of interest to many different types of visitors. For example, have you ever wondered where Abraham Lincoln’s Bible, which was used by Barack Obama at his inauguration ceremony, is housed? You’ve likely guessed it by now: it’s at the Library of Congress. Or, have you ever considered where you might see a first “battlefield” edition of Pablo Neruda famous anti-fascist poem España en el Corazón (1937), constructed on a printing press with found materials from the clothing of soldiers of both the Republican and Franco armies? There aren’t many of them around, but the Library of Congress actually has two of them.

These are just a couple of examples of some of the archives and individual items housed in the Library of Congress, and you could get a chance to see them if you’re in the Washington, D.C. area. If you have questions about other objects or specific archival collections housed at the Library of Congress, you should get in touch with an archivist who can help you plan your visit.