The Many Hats of Science Fiction Author Ray Bradbury

We remember and celebrate Ray Bradbury as the author of Farenheit 451, Dandelion Wine, and other science-fiction classics. But Bradbury was more than an author of novels and short stories; he delved into other disciplines, from screen writing to urban planning.

Bradbury came to screenwriting naturally. When he was fourteen years old, his family moved to Los Angeles. He spent that summer roller skating around Hollywood, hoping to collect autographs from 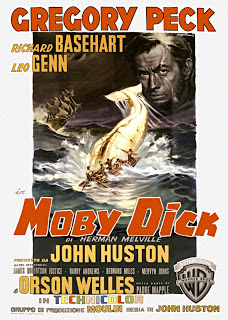 celebrities. Bradbury would remain a lifelong--and vocal--resident of Los Angeles for the rest of his life. John Huston invited Bradbury to adapt Moby Dick for the big screen, an assignment that Bradbury called "the worst six months of my life." Despite his unhappy experience, Bradbury would undertake numerous other screenwriting projects. He's responsible for the original screen treatment for "It Came From Outer Space," which is often considered one of the most influential science fiction movies of all time. His animated film, "Icarus Montgolfier Wright," earned Bradbury an Academy Award nomination, while the teleplay for "The Halloween Tree" garnered him an Emmy Award.

During the days of the Red Scare, Hollywood was turned on end as numerous screenwriters, actors, and other luminaries were accused of embracing Communism. The House of Un-American Activities Committee was created to identify and blacklist individuals who were found to harbor Communist sentiments, blacklisting authors and cinematic professionals like Lillian Hellman. After the Hollywood Ten were cited for contempt of Congress and blacklisted, Bradbury was one of only a few to speak out against the loyalty oath that the Screen Writers Guild tried to impose upon its members.

Bradbury and Walt Disney serendipitously bumped into each other one day in Beverly Hills, leading to an interesting partnership. The two men bonded over their love for envisioning the future and reminiscing about the past. Disney later asked Bradbury to help him with the United States Pavilion for the 1964 New York World's Fair. Bradbury wrote the script for a movie about the history of America for the exhibit. 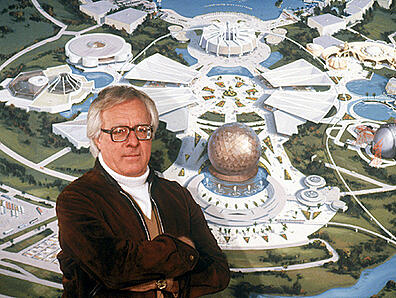 The partnership went well, so Disney enlisted Bradbury to assist him in designing EPCOT Center, which Disney originally envisioned as a model city for 20,000 residents. After Disney passed away, EPCOT was reconceived as another amusement park. But Bradbury remained involved, designing the interior of Spaceship Earth. Later Bradbury designed the Euro-Disney space ride, Orbitron. 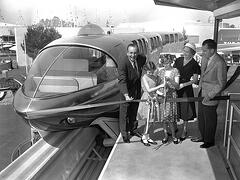 Another Disney project in which Bradbury had a hand was the design of the park's original monorail system. The rail technology was developed by Alweg, which later presented a proposal to the city of Los Angeles. Alweg proposed to build a monorail system at no cost to the city and recoup the expense through riders' fairs. The city declined Alweg's offer, preferring instead to build no public transit. Indeed, the city even kicked Bradbury out of the hearing because he was so vocal. The author spent the next decade trying to build support for the monorail, often addressing local groups about its potential. But his recommendations fell upon deaf ears. The city never did get a monorail system, though it did eventually build a subway.

Yet Bradbury clung to the idea of a monorail. In 2006, he wrote to the LA Times about the addition of the subway's Purple Line. He declared it insufficient and again proposed the construction of a monorail. Bradbury argued, "In a matter of a few months, a line could be built from Long Beach all the way along Western Avenue to the mountains with little disturbance to citizens and no threat to local businesses."

Bradbury spent considerable time envisioning dystopian cities and suburbs, along with utopian space stations for his literary works. That gave him a unique, if somewhat simplified, perspective on the state of the American metropolis. Bradbury wrote frequently on the subject; in the 1950's he predicted the desolation of America's urban centers, a prophecy that was fulfilled within a few decades. Bradbury finally took on the subject more fully with Yestermorrow: Obvious Answers to Impossible Futures (1991). Bradbury argued, "Malls are substitute cities, substitutes for the possible imagination of mayors, city councilmen, and other people who don't know what a city is while living right in the center of one. So it is up to corporations, creative corporations, to recreate the city." 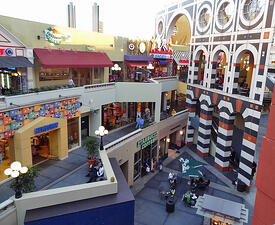 Bradbury predicted, for instance, that Los Angeles' Century Mall complex would founder due to its lack of restaurants. Sure enough, the mall suffered--until more dining establishments were added. World-class mall designer Jon Jerde was so impressed with Bradbury's insights, he invited the science fiction author to consult on the design of other malls in Los Angeles, including Glenvale Galleria and Westside Pavilion. His concepts also inspired San Diego's eccentric Horton Plaza, pictured at right.

Ray Bradbury's varied interests and contributions illustrate that an "authorial eye" can truly expand one's perspective and provide unique insight into the challenges and evolution of the real world.