The National Book Awards: A History of Quality American Literature

The literary landscape of America shifted on March 16th, 1950. On this day, the first National Book Awards were presented in New York City at the Waldorf-Astoria Hotel. Although notable authors were already recognized before this day through the Pulitzer Prize and the Nobel Prize, the National Book Awards set themselves apart by focusing on literature alone and awarding prizes chosen exclusively by writers. Their mission is to "celebrate the best of American literature, to expand its audience, and to enhance the cultural value of great writing in America." 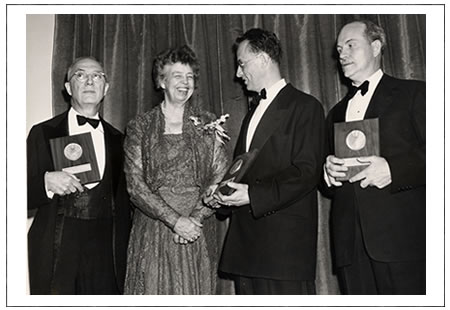 Following the inaugural event, the Boston Herald wrote, "Literary history was indeed in the making." This statement has stood strong through the test of time. Today, a National Book Award is still one of the most prestigious recognitions an author can receive.

The National Book Awards were born when three powerhouses in the literary industry came together to sponsor the prizes. The American Book Publisher's Council, The Book Manufacturer's Institute, and the American Bookseller's Association all pitched in to make the awards a possibility.

The first awards were presented in three categories: fiction, poetry, and nonfiction. Over the years, these categories expanded to also include arts and letters; autobiographies; children's books; contemporary thought; first novels; history and biographies; original paperbacks; philosophy and religion; science; and translations.

As categories were added and the awards continued to evolve, a new name was briefly adopted: The American Book Awards. At this point, 28 different awards were presented each year. An additional development had also changed the face of the awards: although writers were still included among the judges, the decision makers now included publishers, librarians, booksellers, and critics.

Feeling that the awards had drifted too far from their original intent, the board members of 1984 decided to start transitioning back to the way things were in the good ol' days. The categories were reduced back to just three: fiction, poetry, and nonfiction. In 1987, the name of National Book Awards was reinstated, along with the return of a writers-only panel of judges. One additional category has been added since then: Young People's Literature in 1996.

Over the years, the National Book Awards have rewarded American writers who have shaped and challenged modern-day literature. Previous winners in fiction have been William Faulkner, Tim O'Brien, and Flannery O'Connor. Recipients in the poetry category include Allen Ginsberg, Elizabeth Bishop, and William Carlos Williams. Nonfiction has rewarded the work of Tim Weiner, Tina Rosenberg, and Richard Rhodes.

The National Book Awards continue to be presented every autumn, and this year's winners will be announced tomorrow.

2013 nonfiction finalists are Jill Lepore's Book of Ages: The Life and Opinions of Jane Franklin, Wendy Lower's Hitler's Furies: German Women in the Nazi Killing Fields, George Packer's The Unwinding: The Inner History of the New America, Alan Taylor's The Internal Enemy: Slavery and War in Virginia, and Lawrence Wright's Going Clear: Scientology, Hollywood, and the Prison of Disbelief.