From celebrity twitter fights to hijacking award shows, drama is created and spread around in every media outlet and our beloved writers are not exempt from these jealousy fueled fires. Now, let’s take a look at some of the most famous literary brawls in history.

Aside from writing, Vladimir Nabokov taught lessons in Comparative Literature and both Russian and European Literature at illustrious universities such as Wellesley College and Cornell University. Although Nabokov had the upmost praise for James Joyce's novel Ulysses,  he saw no literary value in Finnegan’s Wake. In relentlessly harsh reviews, Nabokov denounced Finnegan's Wake as the “greatest failure of all time”, “a formless and dull mess of phony folklore,” and a “cancerous growth of fancy-word tissue”.

Twentieth-century author Ernest Hemingway was not known for getting along well with others. From Ford Madox Ford to one-time literary friend, F. Scott Fitzgerald, Hemingway had insults for just about everyone. Hemingway commented that one of his own early poems “Ultimately” is “bad enough to fit perfectly into a collection of Faulkner's 'early shit.'" In a letter to Owen Wister, Hemingway called Faulkner a "no-good son of a bitch" and Faulkner’s novel Sanctuary “pretty phony.”

His slams got the best of him and in September of 1932, Robert Coates, writer for The New Yorker scolded Hemingway’s childish comments on Faulkner’s work, to which he replied “There weren’t any cracks against Faulkner” and he has “plenty of respect for Faulkner and wish[es] him the best of luck”.

Prior to the revelation that Frey’s first novel A Million Little Pieces (2003) is largely fictional,  Frey was asked to comment on his contemporaries such as David Foster Wallace, Jonathan Safran Foer, and Dave Eggers. Frey proved less than gracious, lashing out with vulgarity and saying of Egger’s book A Heartbreaking Book of a Staggering Genius, “A book that I thought was mediocre was being hailed as the best book written by the best writer of my generation.” Frey has since recanted what he said about Eggers, regretting his “rude” and “unnecessary” comments.

Although these contemporaries shared many similaries, they kept a respectful distance from each other. However, following Mark Twain’s marriage to the wealthy Olivia Langdon, Ambrose Bierce commented in his News Letter column that Twain now had the luxury of indulging in his “native laziness” and that it was pointless for Twain to continue to lecture with a wife who could fully support him. There is no record of Mark Twain responding to Bierce’s remark or even hearing the comments made, and they continued to be friends despite these harsh words. However, in 1874, Twain was asked to read and appraise Bierce’s book Nuggets and Dust Panned Out in California He gave a ruthless review, claiming that Nuggets and Dust is “the vilest book that exists in print” and that “for every laugh that is in his book, there are five blushes, ten shudders and a vomit. The laugh is too expensive.”

Jack Kerouac, author of On the Road and The Dharma Bums, became widely recognized in the late 1950s for his writing. Despite his acclaim in the Beatnik community, the media and other writers of the time attacked his writing style. Most famously, in a television interview, Truman Capote attacked Kerouac and the entire Beat Generation by saying that “None of these people have anything interesting to say and none of them can write” and additionally discredited Kerouac's work by saying that it was not “writing” it was “typing.”

The fight between Mario Vargas Llosa and Gabriel García Márquez is very intriguing and differs greatly from the rest of our famous literary brawls in that their fight was both physical and personal. At one time, these Nobel Prize winners were the best of friends. However, after Llosa separated from his wife to be with a Swedish flight attendant, Llosa’s wife sought comfort from his good friend, Márquez.

Outside of a theatre in Mexico City, Llosa rushed up to Márquez who opened his arms to embrace his dear friend, who promptly returned the outstretched arms with a swift slug to Márquez’s eye.The two have never made a public statement confirming what actually happened that day, nor have they spoken to each other since the incident.

Tom Wolfe vs. The Three Stooges

Following the publication of Tom Wolfe’s novel, A Man in Full, Norman Mailer and John Updike criticized the book, with Mailer claiming in The New Yorker that his writing was “entertainment, not literature.” A month after this review, Mailer went even in the New York Review of Books, saying that reading A Man in Full was like “making love to a three-hundred-pound woman. Once she gets on top, it's over. Fall in love, or be asphyxiated.”

Over a year later, in November of 1999, Wolfe retorted in an interview with The Charlotte Observer that Mailer and Updike are nothing but “two old piles of bones.” John Irving then entered the quarrel through Canadian talk show Hot Type. When asked to comment on the “war” between Wolfe and the two authors, Irving replied that it isn’t a war because “you can’t have a war between a pawn and a king” These words undeniably wounded Wolfe, as he recoiled by commenting that he views the three as Larry, Curly, and Moe—the Three Stooges. While he continues to admire their work and how they influenced literature, Wolfe insists that he is out experiencing life and living in the times, and Irving, Mailer, and Updike are cowering in their homes rather than engaging in life around them. 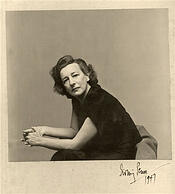 In 1979, after the release of Mary McCarthy’s most recent novel, she appeared on the Dick Cavett Show. During her interview, she was asked to name a writer that she considered overrated. Somewhere in her list, McCarthy argued that Lillian Hellman was “a bad writer”, “a dishonest writer”, and “tremendously overrated.” Asked to clarify her statement, she replied, “Every word she writes is a lie, including 'and' and 'the.’” Inevitably, Hellman was outraged when she heard about McCarthy's comments. Not only would she go after McCarthy, but she intended to sue the Educational Broadcasting System and Dick Cavett for $2.25 million on the grounds that McCarthy’s statement was "false, made with ill-will, with malice, with knowledge of its falsity, with careless disregard of its truth, and with the intent to injure the plaintiff personally and professionally."The quarrel was never settled and the charges were dropped in 1984 when Hellman passed away.

In a review of Salman Rushdie’s book Shalimar the Clown, John Updike expressed his dislike of Rushdie’s usage of the name Maximilian Ophuls as the main character in his novel, vocalizing the difficulty of differentiating Rushdie’s character from the actual Maximilian Ophuls—a famous actor and director in the mid-1900s.  During the fall of 2006, Salman Rushdie was interviewed by The Guardian of London and asked to comment on Updike’s remark, to which he replied that, “a name is just a name” and that “somewhere in Las Vegas there's probably a male prostitute called John Updike.”

Last but not least—and probably one of the greatest literary feuds of my generation— Stephen King dismisses Stephenie Meyer’s Twilight saga for having no literary merit. In the early months of 2009, while promoting his newest book, the horror writer slammed Meyer in an interview with USA Weekend, saying that she “can’t write worth a darn” while her contemporary JK Rowling is a “terrific writer.”He continued to explain that her books were thoroughly enjoyed by the young audience because they are not “overtly sexual” and “safe,” which is “shorthand for all the feelings they’re not ready to deal with yet.”

King received a great deal of backlash and criticism from Meyer supporters insisting that he was jealous of her rapid rise to stardom, while he started off as a struggling writer. However, King and his supporters continue to insist that he is not jealous because there is nothing for him to be jealous of.