The Politics of Mark Twain

Mark Twain’s politics can be slippery to pin down, in large part because the modern popular conception of Twain is of a man who loathes and disrespects politics. By all accounts Twain himself did everything in his power to foster that conception. He may not have given the quote about politicians and diapers which is often erroneously attributed to him (that they “should be changed often, and for the same reason”), but he did assert that “often, very often, in matters concerning religion and politics a man's reasoning powers are not above the monkey's,” and that “In religion and politics people's beliefs and convictions are in almost every case gotten at second-hand, and without examination, from authorities who have not themselves examined the questions at issue but have taken them at second-hand from other non-examiners, whose opinions about them were not worth a brass farthing.” In spite of his expressed aversion to the political, however, Twain’s true political leanings shone through in both his work and his public persona. 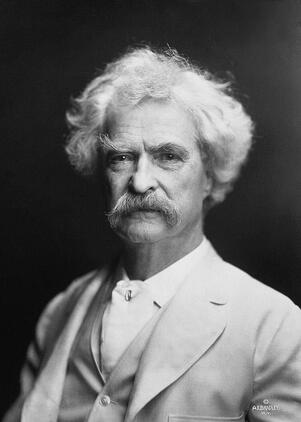 The myth of the apolitical Twain, of course, arises not just from his anti-political comments, but from the difficulty that many have in making sense of political opinions that he did express. Liberals have long been quick to count him as one of their own, and conservatives have often done the same. This fact, almost as much as Twain’s statements themselves, have led some to the conclusion that Twain’s politics simply fail to cohere, that they’re not worth the time and effort to unravel.

Luckily, many of his individual views are fairly legible: he was an adamant abolitionist; he was (eventually) a voice of anti-imperialism; he supported women’s suffrage; he was pro-labor unions; he was essentially in favor of laissez-faire capitalism, disparaging the government’s attempts to regulate business and trade.

The picture painted by the above set of views is no more enigmatic than those of a modern day libertarian or your run-of-the-mill liberal, anti-regulation tech billionaire. The fact that this combination of beliefs is not currently represented by either major American political party does little to change the fact that Twain’s is in many ways a pitch perfect, almost radical version of classical liberalism. Twain himself would even acknowledge that fact, asserting in a letter to William Dean Howells that he had become more radical as he had grown older, coming to identify with the ideals of the French Revolution.

Conversely, it’s easy to undersell the enigmatic nature of Twain’s politics, especially given what one encounters in Twain’s actual fiction. Though overt political messages are rarely Twain’s modus operandi, subtleties exist. Even 1865's The Jumping Frog of Calaveras County, the otherwise-irreverent story of a rigged frog jumping contest that earned Twain some of his earliest acclaim, has a touch of the political in the form of a frog named after famed statesman Daniel Webster.

Of more political import for our purposes, however, is Twain’s magnum opus, The Adventures of Huckleberry Finn (1884). In the last section of the novel, Huck and Tom Sawyer are trying to spring escaped slave Jim from his temporary detainment in Tom’s uncle’s barn. While Huck, having developed an affection for Jim despite a telling refusal to take a stand against slavery as a whole, avers that breaking Jim free is as a simple as stealing the key and opening the door to the barn under cover of darkness, Tom adopts the posture of an antebellum American Don Quixote, insisting that the daring escape must be carried out in the proper fashion (Huck’s plan is “too blame simple,” and “mild as goosemilk”). What he means is that their actions must take on the quality of romantic derring-do in the fashion of the era’s adventure stories. Instead of taking the simplest route, Tom dreams up increasingly elaborate schemes for springing Jim from his makeshift cell—intentionally incurring unnecessary danger and a high risk of failure, all for the sake of conforming to a set of heroic tropes. Ultimately, Tom gets Jim re-captured and himself shot in the leg for his troubles.

Crucially, Tom too is indifferent to the question of abolition. His sense of romance and adventure enables him to help an escaped slave without having to grapple with the political ramifications of slavery itself. The fact that he knows in advance that Jim has been freed in the will of his recently departed owner complicates Tom’s actions slightly (without necessarily quite redeeming them), but the overall effect is a biting satire—on Twain’s part—of the ease with which political questions (like those of race) can be swept aside.

And, indeed, it’s this very same ease that allows Huck, with considerable cognitive dissonance, to assert that helping a runaway slave is morally wrong while continuing to act as though he is morally obliged to do so.

Whatever Twain’s actual politics are, he was not afraid to take other writers to task for skirting the political in their work and thereby erasing it in reader’s minds. For all of Mark Twain’s apolitical posturing, there is an incentive to engage politically—it’s just that politicians themselves maybe ought to stay out of it.