It has often been said that the writings of Ralph Waldo Emerson are best experienced as a series of profound quotes strung together. While that may be the case, Henry David Thoreau, one of Emerson’s fellow seminal transcendentalists and the author of Walden (1854) and Cape Cod (1865), has an oeuvre that is equally laden with excellent quotations. “The mass of men,” he says in Walden, his classic rumination on solitude, self-reliance, and nature, “lead lives of quiet desperation.” Sometimes the cure for that desperation, Thoreau’s writing seems to suggest, is an expertly deployed quote. 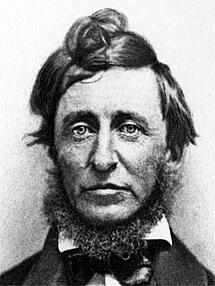 Thoreau was born in Concord, Massachusetts in 1817. He came from a modest but well established New England line whose legacy he furthered by attending Harvard, as so many in his family had done before him. Upon the completion of his studies, he joined a circle of writers and thinkers that he had met through Ralph Waldo Emerson, who had himself been introduced by a mutual friend. It was at this point that Thoreau began to undertake the literary and philosophical labors on which he would found his reputation, beginning with what would become a prolific set of journals. As early as 1840, he remarked:

“no definition of poetry is adequate unless it be poetry itself… you might as well think to go in pursuit of the rainbow, and embrace it on the next hill, as to embrace the whole of poetry even in thought.”

That same year, his philosophy began to take shape in those same journals. He advised, “Have no mean hours, but be grateful for every hour and accept what it brings. The reality will make any sincere record respectable.” He further noted, in the following year, “We are as much as we see. Faith is sight and knowledge.”

Shortly after discovering that the conventional career paths taken by Harvard graduates (law, medicine, politics, etc.) were of little interest to him, Thoreau began what would prove to be the most important phase of his career. Between 1845 and 1849, Thoreau would publish both Walden and Civil Disobedience (1859), two tracts that would come to define his legacy and influence such notable writers, thinkers, and activists as Walt Whitman, Martin Luther King, and Mahatma Gandhi. In the former volume, which chronicles Thoreau’s years spent living in relative isolation on Walden Pond, the author takes note of the material excesses of modern life.

“Most of the luxuries,” he says, “and many of the so-called comforts of life, are not only not indispensable, but positive hindrances to the elevation of mankind.”

He further expounds on this notion, noting, “men remain in their present low and primitive condition; but if they should feel the influence of the spring of springs arousing them, they would of necessity rise to a higher and more ethereal life.” 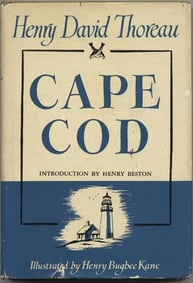 While Walden concerns itself with man and nature, Civil Disobedience sets its sights on politics. In it Thoreau remarks:
“If a thousand [citizens] were not to pay their tax-bills this year, that would not be a violent and bloody measure, as it would be to pay them, and enable the State to commit violence and shed innocent blood. This is, in fact, the definition of a peaceable revolution, if any such is possible.”
Further, he asks a bold rhetorical question upon which the Civil Rights Movement could be said to have been founded:
“Unjust laws exist: shall we be content to obey them, or shall we endeavor to amend them, and obey them until we have succeeded, or shall we transgress them at once?”
Equally memorable is his assertion, “Any man more right than his neighbors constitutes a majority of one.” While his politics may sometimes seem overly anarchic to a modern reader, and even he was unable to sustain the self-reliance he preached for more than a couple of years, one can’t say that he didn’t have some of the most delightfully distilled thoughts of his era.