October is the month of goblins, ghosts, and ghouls. While these imaginary creatures are surely scary, another sort of monster has fascinated and frightened us since 1886. That year, Robert Louis Stevenson published Strange Case of Dr. Jekyll and Mr. Hyde. The tale has gripped generations of readers because it reminds us that we all have monsters lurking within. The Seeds of a Legendary Tale

Robert Louis Stevenson was born on November 13, 1850 in Edinburg, Scotland. Weak lungs inherited from his mother left Stevenson a sickly child and before he was two years old, a nurse by the name of Alison Cunningham joined the Stevenson family as Robert’s nurse. Cunningham was a fervent Calvinist and these views permeated the stories she told Stevenson. Despite her good intentions, the ill and easily excited boy’s imagination turned these stories into nightmares. Even as an adult, Stevenson would suffer from night terrors.

To appease his father, Stevenson went to Edinburg University to study engineering, in hopes to follow in the family footsteps of designing lighthouses. He abandoned engineering and began to study law which he too gave up to practice writing. His first published works were travel writings describing landscapes, the people he encountered, and the adventures had.

In 1876, he met his future wife, Fanny, in a small village in south-east Paris. She was ten years older, separated from her husband, and had two children from her previous marriage. In 1880, they were married in San Francisco. Fanny would become an indispensable critic and confidante in Stevenson's writing process.

Just like his travel writings, Stevenson grabbed inspiration for his fictional writings in his everyday life. Treasure Island started out as a treasure map drawn by his twelve-year-old stepson on a rainy summer day; however, The Strange Case of Dr. Jekyll and Mr. Hyde did not begin on such a light note.

Deacon William Brodie—cabinet maker, town councilman, and head of The Incorporation of Wrights and Masons—lived in Edinburg, Scotland during the mid-1700’s. Brodie was seen as an honorable member of society, making his living repairing locks and door mechanisms for homes all over town, which supported his alternative lifestyle in more ways than one.

Brodie’s night life included being the head of a burglary gang, two mistresses, several children, and a gambling addiction. During his day job, Brodie would copy his client’s keys with wax molds made from the original, so he could return later that night and steal from the homeowner. His scheme ended in 1786 when he attempted an armed robbery at Chessel Court, in his Majesty’s excise office. Brodie was caught and hanged on October 1, 1788 on a gibbet he recently redesigned. 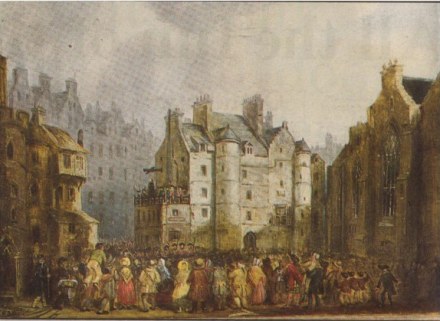 "The Execution of Deacon Brodie" by Alexander Hay Ritchie

Brodie Is a Household Name

Stevenson's father had actually hired Brodie to make some furniture for the family, and these pieces were still in the Stevenson home during the author's childhood. Brodie's legacy lived on this way, in the households of people all over Edinburgh. Although Brodie and Robert Louis Stevenson never met, Deacon Brodie’s story was one known by every Scot. In his youth, Stevenson coauthored a play with W.E. Henley, titled Deacon Brodie or The Double Life. It was finally produced in 1882.

In the early fall of 1885, Fanny woke Robert Stevenson in the midst of a night terror. Stevenson was angry with Fanny for awakening him because he was "dreaming a fine bogey tale." The scenes from this nightmare were the foundation for Jekyll & Hyde. Stevenson wrote the novella feverishly, passing it to Fanny for review when he finished it. Fanny suggested that the work should be more allegorical, and Stevenson apparently took this criticism to heart. He claims to have burned the original manuscript and started from scratch. The publicized version of the story is allegorical, playing on the good and evil residing inside of every person.

Appealing to the social angsts of the Victorian era—struggling with identity, the technological advancements, and respectability made it an instantaneous hit that continues to spark interests in generations of today. Jekyll & Hyde has become iconic, adapted for countless plays, movies, and other manifestations of popular culture. Indeed, it was first adapted for the stage only a few years after publication.

When did you first encounter this legendary character? And why do you think we've been so enraptured with Jekyll & Hyde for so many years?