There’s been plenty of speculation about what Eloise would be like as a grown up. Sarah Ferrell at the New York Times wrote that, “today, she’d probably be on Ritalin.” Carolyn Parkhurst at the New Yorker put together a short piece in 2014 imaging Eloise as a 46-year-old (still) living at the Plaza Hotel, which includes the line, “Some mornings, I wake up with a rawther awful hangover.” Surely somewhere there is a more optimistic take on the life trajectory of the maximally whimsical and mischievous among us—but the consensus seems a little bit dark.

Of course, that consensus is wildly unfounded. How can we tell? Because Kay Thompson, creator of Eloise and author of the first four Eloise books, continued to live a life of elegant mischief that frankly beggared belief well into her eighties. If you’re looking for an adult Eloise, you need look no further than Kay Thompson herself.

Kay Thompson at the Plaza

If you read this blog regularly, you pretty much know how the story goes. Kay Thompson was Old Hollywood royalty, starring in Funny Face (1957) and sharing the screen with Fred Astaire (whom she hated). She was a Ziegfield Follies alum with a long resume in radio, and as something of a musical virtuoso she helped such notables as Judy Garland and Frank Sinatra to refine and perfect the styles that would make them famous. She was Liza Minelli’s godmother—and somewhere in the middle of all this she had the time to create Eloise, one of the most beloved characters in all of children’s entertainment (though Kay herself always contended that her books were for adults—hence the original subtitle of the first Eloise installment, A Book for Precocious Adults.)

Now, it might be tempting to look at Thompson’s collected writings and assume that the original Eloise books are basically the end of the story. But in point of fact, Thompson, who had always averred that the Eloise character was based on herself, just went right on living like a real-life avatar of her beloved creation. After her success on screen, she jet-setted off to Rome, where she lived in a palazzo with a fake cardboard fireplace (which she herself had constructed), letting a stack of incomplete manuscripts languish outside. While in Rome, she learned to play the banjo so she could serenade her pug, Fenice (this after she had to remove the legs of a grand piano to get it into her room—only to decide that her dog didn’t appreciate her piano playing). Late in life she apparently subsisted on nothing but Coca-Cola.

And, of course, like Eloise, adult-Thompson lived for a time at the Plaza. After returning from Rome, she established residency there; also like Eloise, she didn’t pay for anything. That’s right. She established squatter’s rights and lived there rent free for seven years. (All the while they were selling Eloise gift cards and other merchandise in the gift shop.) After those seven years were up, the hotel was bought up by a new management company, and she was summarily kicked out. Who owned that management company, you ask? None other than Donald Trump. I’ll let that sink in for a moment.

Following the eviction, Thompson moved in with goddaughter, Liza Minnelli. Sometimes, readers would idly speculate that Eloise had been based on said goddaughter. Thompson would respond, consistently, “‘It is not Liza. It is totally me. It is me, Eloise.” 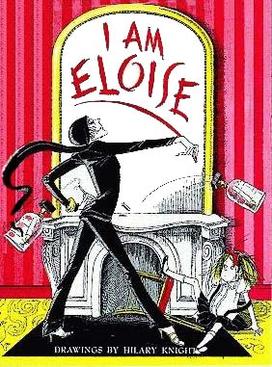 Of course, there’s arguably something of a dark side to being a precocious child as an adult, and Thompson was seemingly not immune from bouts of what seem, in hindsight, like caprice. Like Flaubert’s famous quote about his own creation (“Madame Bovary, c’est moi), there is a touch of ambivalence about identifying so strongly with an iconic six-year-old. Perhaps most famously, she pulled publication of her fifth Eloise book before it had been released. In fact, she had all but the first of the Eloise books scrapped by their publishers, believing that none had been up to the lofty standard of the original. Not only did this make the books fairly difficult to find, it also meant that Hilary Knight (who had signed away his rights to the character), was unable to draw Eloise any longer. Luckily, following Thompson’s death in 1998 her estate let the works come back into print—even paving the way for the posthumous release of Eloise Takes a Bawth in 2002.

To those of us whose idea of a wild Friday night is sequestering oneself at home with a good book, Kay Thompson mostly remains a beloved children’s author. But for those that knew her personally, she’s become something like a folk hero—think John Henry in pink lipstick. After her death, Joe Eula recalled working with her on a book about her dog, Fenice (the apparent banjo enthusiast), whom she fed, “a diet of lime Chuckles, chocolate-covered cherries and braised livers in Marsala wine sauce.” The project, appropriately, was called My Darling Baby Boy. Her colleague Jim Caruso remembered that, leaving a terse message after listening to a voicemail recording that included information about sending a fax, ““You very likely can be faxed, but can you be fixed?” He also noted that the last thing Thompson said to him was, “See you in the movies…” If this woman didn’t have a flair of the dramatic, then no one living ever did.

She’s also variously credited for giving great, no-nonsense pep talks in times of need, for discovering recordings of monk’s chants before they were trendy, dramatically taking charge of the proceedings the day Judy Garland died, and on and on ad infinitum. Maybe some of it is exaggerated, but certainly no more exaggerated than her entire life seemed to be. How much knowing about Kay Thompson’s life will enrich our future readings of Eloise is hard to say—but I’m willing bet that learning about Kay Thompson’s life and antics is pretty darn enriching in its own rite.