The Spookiest Ghosts of World Literature

Halloween often ranks as people's favorite holiday--after all, who can resist costumes and candy corns? Many of us love the holiday for much spookier reasons; we love those ghosts, goblins, and ghouls. Ghosts have haunted the pages of many a book, including those of some of the best works of world literature. We’ll list ten, beginning with the creepiest, ghouls in BOOOOks!  See?  You've already had your first scare and we haven't even started the ghostly countdown.  Hold on tight--you're about to take a trip through a haunted house full of ghastly literary characters.

The Ghost of Conscience in The Tell-Tale Heart

Approaching the house, we encounter a sound: a thump, thump, thump audibly echoes from inside the door, and the windows show the illusion of an eye, an evil eye upon us.  Edgar Allan Poe, master of gothic stories, introduces us to the ghost of the old man in “The Tell-Tale Heart,” and he leaves us forever fearful of a “low, dull, quick sound, such as a watch makes when enveloped in cotton.” The beating of the old man’s heart haunts the narrator after death.  After dismemberment, even after careful concealment beneath the planks of the floor, the old man tempts the narrator to check on him and stare into the his dead eye, “all a dull blue, with a hideous veil over it that chilled the very marrow in my bones.” And chilled we are, indeed, for the haunting delivered by Poe leaves us jumping at the slightest creak of the foyer floor.  Our own hearts beating perhaps loud enough to drown out the thump of Poe’s tell-tale heart, we enter the house cautiously.

Psychological Terror in The Haunting of Hill House

In The Haunting Of Hill House, Shirley Jackson dares us to enter a house that seems to have a menacing personality on its own.  All inhabitants of the 85-year-old mansion experience strange events, but the effect that the house seems to have on its mousy and remote resident, Eleanor, is truly inexplicable.  The true terror of the story is the house itself, which seems to possess Eleanor.  The ending will leave you wondering if Eleanor is emotionally unstable or if the house is the true ghoul of the story, coercing the girl to facilitate death.

Marley's Ghost in A Christmas Carol 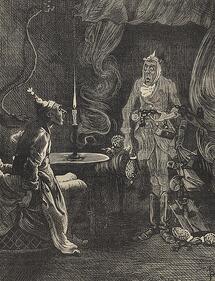 Many a Victorian indulged in a Christmas ghost story, and the Inimitable One was no exception. Charles Dickens reaches into our moral conscious with the ghost of Jacob Marley who, in death, urges his ex-partner Scrooge to change his ways or else face an afterlife of misery and horror.  In his appearance in A Christmas Carol Marley’s face has a “dismal light about it, like a bad lobster in a dark cellar,” and a bandage under his chin that we discover is holding his jaw to his head.  He removes the dressing, “as if it were too warm to wear indoors, its lower jaw dropped down upon its breasts!”  The creepy ghost of Marley will stay with us, perhaps pleading with our own conscience to lead a life of kindness, generosity, and compassion, or face a permanent afterlife of hell.

The Horrifying Ghouls of Dante's Inferno

Our next haunted location has not nine rooms, but nine circles--of Hell. In Dante’s Inferno, each circle is creepier than the last.   The first brings us face to face with Minos, judge of the underworld.  The second opens to a terrible storm where souls are blown back and forth aimlessly, without rest.  The third circle has a stench that seeps through the keyhole.  The worm abiding here lies in a vile slush produced by ceaseless foul, icy rain.  The creepy activity going on behind door number four is a battle between the miserly and the prodigal, who push their chests in a joust as they howl, “Why do you hoard?  Why do you squander?”  If you aren’t scared enough, follow me into the fifth circle, where we are 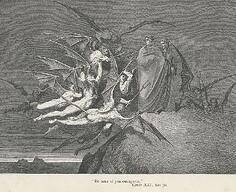 engulfed in "a black sulkiness which can find no joy in God or man or the universe.”  Let’s escape that vacuous room of void and sorrow and move next to room six to find heretics trapped in flaming tombs.  From here we can smell the foul stench of the seventh room, but we bravely enter still, to see a river of boiling blood and fire, suicides hung in trees and brush to be fed upon by winged spirits, and beyond the boiling river to a desert of flaming sand where fiery flakes fall from the sky onto blasphemous sinners.  The noises coming from room eight are enough to scare the bravest of us where demons whip sinners, surrounded in excrement, placed head-first into holes with flames burning the soles of their feet, sufferers walking in weighty gilded cloaks, a fire breathing dragon, and demons tearing apart the bodies of the inhabitants of the eighth circle of hell.  The ninth circle brings us face to face with Dante’s Satan, a monstrous three-headed beast with wings under each chin who feeds on the sounds of the most egregious sinners.

The Ghosts of The Turn of the Screw

Are you quivering yet as we pass through this haunted literary house?  Henry James meets us in the kitchen with The Turn of the Screw.  We watch Miles as he is sexually molested by the ghost of Peter Quint and haunted by Miss Jessel.  What creepier threat than the haunting of dead lovers?  James' ghostly novella has been described as the "ghost story for people who dislike ghost stories." The novel's ambiguity results in a truly intimate terror that's difficult to shake, even long after you've finished the last page.

The Ghastly Inhabitants of The Shining

Keep your limbs close to you as we enter the study of the house where we meet Stephen King, the master of horror himself. Sure, you’ve seen the movie.  Stephen King’s, The Shining, is a staple in your horror DVD collection, but you’re missing an essential experience in ghastly literature if you haven’t encountered the penned apparitions conjured by the little boy Danny, whose father ultimately falls victim to the haunting of the hotel and his voluntary seclusion in what would be his last and fatal move. When the Torrance family moves into the isolated Overlook Hotel, Danny begins to see horrific images of the hotel's gruesome past. Thanks to Danny's telepathic abilities, the hotel's ghosts cannot possess him, so they move on to his father, Jack instead. The supernatural power urges Jack to kill his own wife and child, and they only manage to escape by killing Jack. Now it’s your move.  Do we continue on, or have you abandoned our tour?

The Phantom King of Hamlet 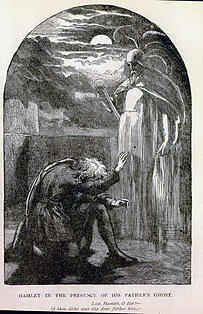 You were unaware, but we have been watched by a king visiting us from Shakespeare’s Hamlet.  He observes us from purgatory and aims to ask us to avenge his death.  The King makes four appearances in Shakespeare’s play and grows ever insistent that his revenge be carried out.  He appears to Hamlet dressed in full armor, revealing that, “The serpent that did sting thy Father’s life, Now wears his crown.”  He reveals himself to us to insure his message is heard, and to lead us onto the porch. Legend says that Shakespeare himself used to play the role of "Ghost" in Hamlet, and the character is loosely based on a legendary Jutish chieftain Horwendill.

The Seafaring Spirit of "The Upper Berth"

Brisbane of “The Upper Berth” by F. Marion Crawford boasts of a ghostly encounter.  He tells of superstitions that follow him on a boat, where he inhabits a room whose previous three occupants had gone overboard.  He stubbornly refuses to move rooms, even after the steward's strong urging.  He comes to find that the room is haunted and has a creepy meeting with a drowned ghost.  “My hair stood on end, and the cold perspiration rolled down my face.”  Brisbane escapes with a broken arm.  Let’s try to escape with less damage as we make our way to our next spooky destination.

The Malevolent Woman in Black

We are confronted with a woman in black.  She is, in fact, The Woman In Black  written by Susan Hill.  There’s faint sound of a child screaming and a horse and carriage.  The woman is a mother in distress over the loss of her child in a carriage accident and she is vengeful and malevolent in her intentions here.  Beware her rage, as she wishes to exact revenge for the death of her son.  We hear now what seems to be a great noise from beyond the property’s perimeter.  A monotonous rhythm and humming ring clear.

The Dead Men of Middle-Earth

The Dead Men of Dunharrow, legendary Middle-Earth ghostly dwellers of JRR Tolkien’s Lord of the Rings, are cursed to remain there after they abandoned their oath to aid Isildur.  These “men of shadows” appear as grey shades, some riding horses, but all moving at the same pace.  The Dead Men need no weapons, as their primary weapon is fear.  The King recites, “The way is shut.  It was made by those who are Dead.  And the Dead keep it.  The way is shut.”  The Dead appear to suck the life from their foes.

And this is where we leave you in our tour, having taken you as far as we can muster the courage to explore.  Shirley Jackson writes, “I delight in what I fear.”  Perhaps we’ve had enough delight for one sitting.  Get with the spirit of Halloween and read a few scary stories today.  We dare you to find creepier tales than these we’ve briefly reviewed.  Find fright and delight, friends!