The Story Behind Benjamin Franklin's Autobiography

Benjamin Franklin is undoubtedly one of the largest looming figures in American history. His shadow rests on everything from politics to spirituality. And his biography is just as important to American literature as he was to American politics. However, the road to publication was not easy. Fittingly of such an unconventional figure, the story behind Franklin’s autobiography is filled with many twists and turns. 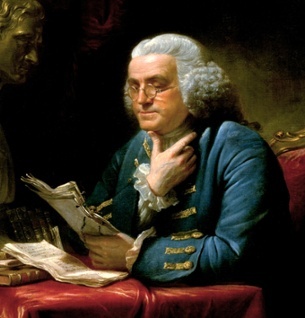 In 1791, Franklin’s autobiography was published in French as Mémoires de la vie privée de Benjamin Franklin. In his lifetime, Franklin had titled the work, which he wrote in four parts, his memoirs. However, the 1791 French translation was produced based on a transcript of Franklin's memoirs made before he had made revisions. Eventually, the autobiography would be re-translated into French using a still flawed English translation as guide. This was just the beginning of a series of publications that would eventually lead to Franklin's memoirs being fully released.

A three-part translation of Franklin’s autobiography was published in English by his grandson, William Franklin in 1818. However, there were some problems with this version, too. William Franklin had given away the original manuscript for a copy that didn’t contain the fourth and final part of Franklin’s autobiography. In addition, William Franklin made broad revisions to the biography. In some parts, he followed the translated version rather than the original version. In other places he made his own changes. It wasn’t until 1868, more than 70 years after Franklin’s death that a more reliable and complete version was released.

In 1868, the career politician John Bigelow purchased Franklin’s original manuscript. He published a new edition of the autobiography. It was the first time the final part of Franklin’s manuscripts had been published in English. Over the course of the 20th century, numerous scholars made revisions and changes to the manuscript to increase its accuracy.

While Franklin’s autobiography, now known most commonly as The Autobiography of Benjamin Franklin, has garnered mostly universal praise, there have been some criticisms, most notably from Mark Twain. Twain spouts some good natured derision towards Franklin’s autobiography saying, “His maxims were full of animosity toward boys. Nowadays a boy cannot follow out a single natural instinct without tumbling over some of those everlasting aphorisms and hearing from Franklin on the spot.”

While Franklin’s book may condemn all American kids to a childhood of platitudes, one cannot deny its literary impact.