The Vicar of Wakefield: Edition by Edition

As a great song is covered once and again by a multitude of bands spanning musical genres and aesthetics; a great story is illustrated time over time by a variety of visual artists, each imbuing the work with their sensibilities and vision. Nothing short of a true classic can inspire generations of artists to revisit a piece—to dig deep into its inner workings in an attempt to unearth some hidden meaning glossed over by previous editions or iterations.

And this principle is most certainly true with Oliver Goldsmith’s Victorian novel, The Vicar of Wakefield, first published in 1766, which has since seen numerous editions and reissues and artist interpretations by some of the English world’s most highly-regarded illustrators. 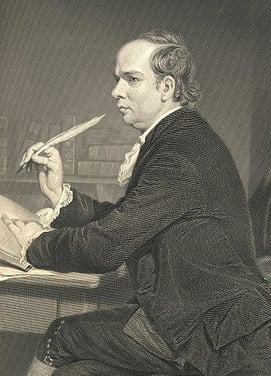 Goldsmith’s novel, which follows the trials and tribulations of the Reverend Dr. Charles Primrose and his family, has long been held as the archetype for the Victorian novel. The plot centers around a series of misfortunes bestowed upon the Primrose family that include robbery, kidnapping, impoverishment, broken wedding engagements, and, ultimately, complete and utter redemption as the Primrose family is restored to its glory just in time for the novel’s end.

While literary scholars quibble over whether the novel should be read as genuine or satirical—a send-up of the all too cliché ‘they lived happily ever after’ ending—all of the literati are in agreement The Vicar of Wakefield has been given some of the more interesting artist treatments in the English speaking world, providing a vast landscape of editions where the differing artistic imprints work in harmony with the narrative to create a wholly unique reading experience.

The first edition of The Vicar of Wakefield was published by B. Collins of Salisbury in 1766 at the behest of the great English author, Dr. Samuel Johnson, Goldsmith's close friend and colleague. Goldsmith devoted about a year to completing the novel between 1761-1762, but had been reluctant to show it to anyone until severe financial hardship—late rent payments and an impending eviction—forced him to let Johnson read it. Due to the urgency of Goldsmith’s situation, the first edition was published without illustration for $60, just enough cash to get Goldsmith out of hock with his landlord.

Though several variants of that first edition exist, all were published in two plain brown volumes without artistic adornment or consideration. Simple numeric designations of ‘1’ and ‘2’ on the spine distinguish the two otherwise identical volumes, each of which are housed in brown cloth casings, as was common of the period.

It wasn’t until nearly 100 years after its initial publication when noted English illustrator Hugh Thomson set his sights on The Vicar, publishing an elaborate interpretation of the novel featuring a full-color cover depicting a rendering of Primrose and his wife strolling arm-in-arm across the jacket cover.

An Irish-born illustrator known for his pen-and-ink drawings, Thomson’s edition features a number of multi-color illustrations throughout the pages and an ornate, faux-golden gilded spine. Thomson’s edition is housed in a stately, charcoal gray cloth casing which helps to accentuate the bold colors Thomson chose for Primrose and his wife: a deep black coat and hat for Primrose himself, and a vibrant striking red for the wife’s dress and bonnet.

But The Vicar of Wakefield was not Thomson’s only foray into the illustration of popular novels. Shortly after his completion of the Wakefield project, Thomson completed illustrated versions of novels by the likes of Jane Austen, Charles Dickens, and others. 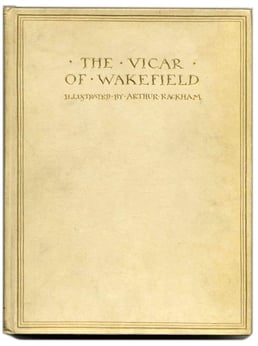 However, first editions and early incarnations aside, perhaps the most famous illustrated edition of The Vicar of Wakefield arrived in 1929 from celebrated English book illustrator Arthur Rackham.

Known worldwide as one of the leading voices during the Golden Age of English book illustrations, Rackham’s edition of the novel is indeed the rarest with only 775 copies put into production—200 of which were for United States publication only.

Rackham’s edition features 12 full-color plates, each of which adorned with striking, bold colors and textures. His robust pen-and-ink style—eerily similar to the warmth of a handmade greeting card, where many of his images currently sit in reproduction today—entice the reader to open the book and begin perusing, and Rackham’s equally flawless internal illustrations offer a foggy, dreamlike interpretation to the scenes he chose to depict.

Rackham’s long and distinguished career included illustrated editions of such seminal works as Cinderella, Sleeping Beauty, The Legend of Sleepy Hollow, and Shakespeare’s The Tempest.

With a resume like that, it’s not difficult to see why Rackham’s edition, of dozens upon dozens illustrated editions, stands out more than 80 years on.