American novelist Theodore Dreiser popularized naturalism in the United States during the early 1900s. Although the movement was begun by French writer Émile Zola, it was largely through the perseverance of Dreiser that it became a force in America. Emphasizing realism and accuracy in art, naturalism went beyond these qualities to reveal how humans are shaped by their circumstances and environment. Renowned literary critic Irving Howe described Dreiser as, "one of the very few American giants we have had." 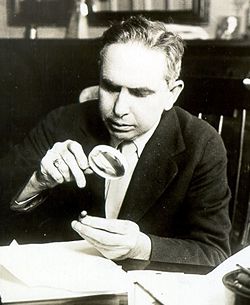 Theodore Herman Albert Dreiser was born on August 27, 1871 in Terre Haute, Indiana. He grew up in a poor Catholic family, with nine siblings and a father constantly underemployed. As one can imagine, Dreiser soon learned the difference between the "American Dream" and reality; he soon understood the difficulty of mere survival. That very consciousness would profoundly influence his future writing. Dreiser never completed high school, despite being an excellent student. He attended Indiana University for a year, with the help of his former teacher, Mildred Fielding, but this was the end of his formal education.

By 1890, he began working as a journalist—an occupation he continued throughout the decade—writing for newspapers and magazines such as the Chicago Globe, Pittsburg Dispatch, and Harper’s Monthly. He wrote on a variety of subjects: critiquing plays, writing special columns, and interviewing prominent figures of the day including Thomas Edison, Andrew Carnegie, and Marshall Field. The experience he gained from reporting would resurface in Dreiser’s later fictional works. During his time as a journalist, he also educated himself by reading works on a multitude of subjects, in addition to trying his hand at poetry and playwriting.

In 1898, Dreiser married Sarah Osborne White, a schoolteacher from St. Louis whom 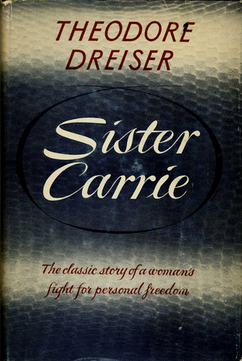 he met through a newspaper contest. Dreiser began working on his first novel after receiving encouragement from White and his friend Arthur Henry, a novelist and editor of Toledo Blade. This novel, Sister Carrie (1900), was largely based on Dreiser's sister, Emma, who began a relationship with a married man on the run after embezzling money. Dreiser’s story describes the life of Carrie Meeber, a young woman who discovers that the key to her happiness is through men’s pockets. The novel was extremely controversial; Dreiser had great difficulty finding a publisher for the novel. Eventually, Doubleday & McClure Company agreed to publish it, however they made no effort to advertise the novel. A year later, William Heinemann published a heavily edited version of the novel. It has become on of Dreiser's most acclaimed works.

Less than a year later, Dreiser began writing his second novel, Jennie Gerhardt (1911). Like Sister Carrie, it describes the struggles of a young woman leaving her rural home for the city. He completed much of the novel in just four months. However, a nervous breakdown caused Dreiser to stop writing for nearly three years. When he was well enough to work again, he resumed his editorial career at various media outlets such as New York Daily News and Broadway. He lost these positions, however, after becoming involved with a coworker’s daughter; out of work, he soon finished Jennie Gerhardt.

Dreiser wrote steadily for the rest of his life—making a name for himself with his third novel, The Financier (1912), the first novel in his Trilogy of Desire. His greatest book, An American Tragedy, was published in 1925. The novel was nothing short of incredible. Based on a well-known court case of the time, Dreiser tells the story of Clyde Griffiths—a fictitious character based off of Chester Gillette who was tried and found guilty of murdering his pregnant girlfriend, Grace Brown. An American Tragedy was Dreiser’s first and only bestseller.

Dreiser's work inspired an entire generation of writers. Indeed, In 1923, Sherwood Anderson composed a tribute to Dreiser in which he wrote, "Heavy, heavy, the feet of Theodore ... [T]he fellows of the ink-pots, the prose writers in America who follow Dreiser, will have much to do that he has never done. Their road is long but, because of him, those who follow will never have to face the road through the wilderness of Puritan denial, the road that Dreiser faced alone."