Thomas Mann: An Exploration of Philosophy and Practicality

Thomas Mann was born into the Hanseatic ruling Mann family, a wealthy clan who held great influence over the city republic of Lübeck, in what was then the German Empire. Mann grew up under the aegis of privilege, raised by tales of his ancestors’ prosperity and the ethos of bourgeoisie practicality. The Manns, as ruling families are wont to do, were preoccupied with the maintenance of their influence, wealth, and respectability. Thus, when the 21 year-old Thomas Mann announced his plans to become a writer, his family took his artistic calling as a betrayal of his auspicious pedigree. Despite his family’s protests, Mann would not abandon his vocation, and he was effectively disowned. The irony of this event, of course, is that Mann would go on to win the Nobel Prize in Literature, and earn the reputation for being the most significant scribe in German letters since Nietzsche, becoming the most revered member of the very family that spurned his artistic pursuits. 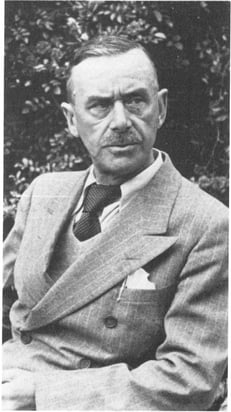 The conflict between the Mann family and Thomas placed the young man in the middle of a plangent clash of culture and philosophy. On one hand, there was the bourgeoisie pragmatism of the Mann family and the European world at large. It entailed the management of power and wealth, of creating a life that was more abundant, efficient, and comfortable. It earned its many disciples the boons of influence, land, beef, tea, firewood, and all else that made life more ostensibly pleasant. All Mann's comforts, his privileges, were indebted to the work and labors of his parentage.

While Thomas Mann appreciated the efficacy and work ethic of his family, he felt it lacking a greater purpose. To Mann, the pursuit of mere money, comfort, and influence was the recipe of a myopic life. He believed careful thought and philosophy were the necessary tools to rescue oneself from the self-centered paradigms of work and leisure, of toil and compensation, and the like. But the artist’s life was not a panacea to the spiritual deficiencies of his European milieu. Mann understood, too, that as nice as they are to have, well-wrought morality and philosophy cannot pay anyone’s rent.

Mann’s struggle, the grand antagonism between philosophy and practicality, between the artist and the businessman, was the thematic spine of his first novel, Buddenbrooks (1901). Published when he was 26 years old, the title lends itself to the name of the noble family it follows over four generations Mann based the family on his own noble roots. The novel begins at a family feast in 1835. The patriarch of the family is Johannes Buddenbrooks, the head of a prosperous although fraudulent grain company. Here, Mann sets the stage for the ideals of laborious pragmatism and purposeful thought to begin their tug of war, one that will last the entire book.

The fate and history of the Buddenbrooks family significantly mirrors Mann’s own. Much like the ruling Manns, the Buddenbrooks experience a decline in influence and prosperity as Germany industrializes and the values and hierarchies that supported them in the past no longer apply. The most prosperous Buddenbrook, Johann, thrives as his determination to succeed permits him to swindle his partners and suppliers. His progeny, like the third generation Thomas and his son, Hanno, yearn for more than the fortune of the family business. Thomas’ intellectual and financial success are at odds within him. He says, “what is success? That awareness that alone by virtue of my presence I can exert pressure on the movements of life all around me.” Thomas is deeply affected by the works of Schopenhauer, and Hanno is captivated by the music of Wagner. But art does not, and cannot, completely solve their spiritual emptiness. In this family saga, Mann simultaneously brings to life generations of characters and dramatizes a great cultural and psychological crisis. Mann objectively captures this paradox of life, or as critic Daniel Burt says, “the conflicting forces in human behavior and thought that give life its fullest meaning and at the same time constitute its greatest peril.”

The Nobel Prize typically honors an author’s entire oeuvre, but Mann's honor is somewhat anomalous. In 1929, he was awarded the Nobel Prize for “his great novel, Buddenbrooks, which has won steadily increased recognition as one of the classic works of contemporary literature.” William Faulkner considered Buddenbrooks to be the best book of the century, and he enthusiastically owned an edition of the novel signed by Mann himself.

Buddenbrooks’ success as a work of art is undeniable, but many readers prefer Mann's more mature effort, The Magic Mountain (1924). Called “the great philosophical novel of the 20th century" by Daniel Burt, it illustrates the culmination of Mann’s ideological thought, and renders masterfully the very practice of assessing and acquiring beliefs. It has been credited as a grand example of the bildungsroman, as well as a formidable interrogator of the foundations of Western culture itself.

The novel was inspired by Mann’s visit to his wife with tuberculosis. Mann caught a cold at the sanatorium where his wife was receiving treatment, and was not allowed to leave. Like his creator, the protagonist of The Magic Mountain, Hans Castorp, cannot leave the sanatorium atop the mountains of Davos. During his stay, he encounters a cast of characters who all introduce Hans to a variety of ideologies. There’s the humanist Settembrini, the sensual and carnal Chauchat, the dutiful Ziemssen, and more. The characters often debate and challenge each other, letting Hans listen and take note of the strengths and weaknesses of each philosophy. 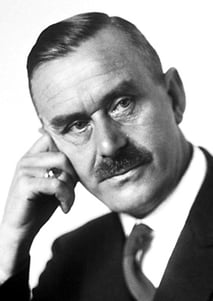 Critic Theodore Ziolkowski said that The Magic Mountain, “approaches perfection to a degree rarely achieved on such a monumental scale.” Its scope of theme and thought shapes a truly dense novel, leading Mann himself to suggest that one read the book twice to better comprehend it. Much of Mann’s thought in other works reaches its apotheosis in this book. Death in Venice, the novella which The Magic Mountain was originally intended to satirically complement, gives way for Mountain to elaborate on the idea of a life of ecstatic triumph over dutiful order.

Illness and death fascinate the novelist, too. Mann wrote of his book, “There are two ways to life: One is the common, direct, and brave. The other is bad, leading through death, and that is the genius way. This concept of illness and death, as a necessary passage to knowledge, health, and life, makes The Magic Mountain into a novel of initiation." And, as in Buddenbrooks, Mann investigates further the virtues and disadvantages of the bourgeoisie and artistic life, and extends his vital thought to the subjects of political radicalism, time, music, the philosophies of Nietzsche and Schopenhauer, and beyond.

The magic of The Magic Mountain is in part due to the fact that no ideology is given preference. The novel centers on Castorp’s exposure to the many contradictory and beneficial ways to live and interpret the world. When Thomas Mann was asked by high school students what Castorp’s fate after the novel’s end was, Mann offered a fitting answer. If Castorp had survived the Great War, the author said, he would have likely remained “the learner, the listener, testing, rejecting, choosing.” This is a fitting prediction for his character, as Mann has created a book which does not purport to have found any "proper" philosophy for life. Rather, Mann has presented an imaginative illustration of how a philosophy may be gained, and how one may continue to be a student of life, dedicated to its full appreciation.