Toni Morrison is described as an American book editor, college professor, essayist, and novelist. Her first novel was published in 1970. She gained national attention and the National Book Critics Circle Award for the acclaimed Song of Solomon in 1977. She was awarded the Pulitzer Prize in 1987 for Beloved and received worldwide recognition with the Nobel Prize in Literature in 1993. But did you know she's also a children's book author?

The list of her awards, prizes, and recognition is very long. She was presented with the Presidential Medal of Freedom in 2012 by President Obama and was granted the PEN/Saul Bellow Award for Achievement in American Fiction in 2016.

Morrison was born and raised in Lorain, Ohio, and graduated from Howard University in 1953 with a B.S. in English. She went on to earn a master's degree in American Literature from Cornell University in 1955. Her parents instilled a sense of heritage and language through by African-American folktales and ghost stories and singing songs. The young Toni was a voracious reader. (source)

She first encountered racially segregated restaurants and buses while studying at Howard. She taught English first at Texas Southern University for two years and then at Howard for seven years. She married in 1958, had two children, and divorced in 1964.

Morrison began working as an editor for a textbook division of Random House in Syracuse, and two years later transferred to Random House in New York City. There she was the first black woman senior editor in the fiction department.  In that capacity she worked to bring black literature into the mainstream. (source)

Morrison as an Acclaimed Author

Her reputation as an author developed in the '70s and '80s. Perhaps the best known of her many novels is Beloved. This is the first novel in a trilogy about love and African-American history. The book explores love and the supernatural and was inspired by a real-world story. A former slave is haunted by her decision to kill her children rather than see them enslaved. The slain baby returns as a living entity that becomes an unrelenting presence in the mother's home. (source)

Morrison has said the three books are intended to be read together. The second novel in the trilogy, Jazz, came out in 1992 and is told in language that imitates the rhythms of jazz music. It is about a love triangle during the Harlem Renaissance.

In 1999, Toni Morrison began collaborating with her younger son, Slade Morrison, on several children's books. He was a painter and a musician. He died of cancer on December 22, 2010, at age 45. These books are not often referenced in all the material written about Morrison, but the following are brief descriptions of some of these works.

If just a few excessively controlling grownups can let children be children then this colorful picture book that speaks a rhyming message of personal freedom and individuality will have served its intended purpose. The children exist in a box with all the amenities modern kids dream of, but no freedom because the adults in this slice of life in America hope to control them with strict boundaries. But the children just want the freedom to be themselves. 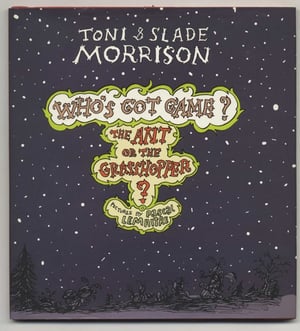 This reworking of the ant and grasshopper fable has strong rhythms and slang that match the jazzy world depicted in the book's artwork. The poetry is effective as it flows through the narration and dialogue. As readers are drawn into the initially lighthearted tale they are neatly led to the conclusion that encourages them to ponder the value and importance of art.

It has been said that this is a charmingly subversive interpretation of a classic tale where a quite hilarious look is taken at bullying. The cocky lion believes himself invincible until he gets a thorn stuck in his paw. Only the weak little mouse can help, but then the lion has to indulge the mouse's newfound pride and appetite for power. The reworked version of Aesop's fable opens up the original story, and the moralistic ending is reimagined. The victim may not lose, the timid gets to be strong, the fool gains insight, and the powerful lose their grip.

Poppy, a bearded Bayou-dwelling African-American grandfather tells a tale illuminating the issues that arise when creatures predisposed by culture to distrust one another react to deny that inclination. Poppy accidentally runs over Snake and is talked into taking him home, where Snake pretends to be his friend. But a snake is a snake and eventually he acts on his nature and bites Poppy. Poppy is prepared for this likely possibility.

Mom leaves the children with their Nana and they play games, hop about in sacks, and dance all around, and they have lunch. All their messy fun is apparent when Mom returns while they're making peanut butter fudge. The high-spirited African-American family is joyfully portrayed in bright oil-paint illustrations. Chocolate covers everything, food is all over the floor, and the cat has taken refuge on top of the refrigerator. The irregular rhymes energize the poems and effectively highlight the love displayed from generation to generation. The recipe is passed to the newest generation and the illustrations extend the narrative, adding humor and warmth.

Take a look at these Toni and Slade Morrison children's titles to expand your view of the incredible talent you already knew about. Enjoy the love.