Umberto Eco: Kant and the Platypus

For many years it was believed that Immanuel Kant never made it more than ten miles outside of Konigsberg. Even though this is demonstrably false (he spent some years working as a tutor in Russia) public perception of the father of modern philosophy has not changed. Thousands of freshman philosophy students each year will happily speculate about Kant’s fussiness, his cloistered lifestyle, and what many diagnose as a desperate need to get out of the house more. The grumblings of would-be thinkers notwithstanding, it’s hard to gripe too much about the man who redefined philosophy in the 18th Century, forever altering the trajectory of human thought. It can, however, still be hard to envision the great thinker coming into contact with anything downright bizarre. 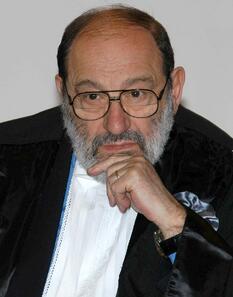 This last thought, as it happens, is the premise of the titular essay in Umberto Eco’s collection Kant and the Platypus (1997). Given the premise (namely, what would Immanuel Kant, who helmed cognitive philosophy’s turn away from the rationalist-empiricist debate that so dominated the early-Enlightenment discussion, have done had he come upon a platypus), it’s almost disappointing that Eco’s piece is a work of philosophy of mind, rather than fiction. That potential disappointment, however, dissipates quickly in light of Eco’s theoretical efforts. Eco, a legendary author in his own right, has long been known for his deft hand at philosophy, and it’s not hard to imagine that Eco is more than up to the task he sets out for himself.

That task, of course, can be difficult to pin down. Though Kant is often spoken of in terms of his moral and aesthetic theories, the question of how knowledge is constructed is absolutely central to his entire corpus. Prior to Kant’s contributions, philosophers divided themselves between two camps. Empiricists asserted all knowledge is derived from experience. Rationalists believed reason and logic exist a priori and are the necessary foundations of knowledge.

After a decade of silence and relative hermitage considering this divide (from which, no doubt, his reputation flows), Kant produced the 1871 tome A Critique of Pure Reason, in which he synthesized the two camps, asserting that while knowledge derived only from a priori truths could yield illusory ideas, sensory knowledge by itself was essentially illegible. Rather than a choice of one camp or the other, Kant described a system whereby a posteriori information was necessary to the construction of knowledge, but all empirical data and sensory experience was necessarily filtered through rational thought. Passive, unfiltered knowledge is, for Kant, impossible, so everything must be perceived through a subjectivity founded on logic and reason in order to be understood. 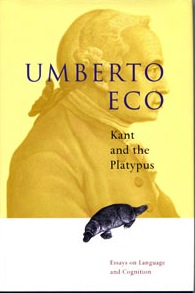 When Eco wonders, then, how Kant would deal with a platypus, it is not merely to muse on the bewilderment of one of our frumpier philosophers, but to question the conflicts that arise when we try strive for knowledge. The discoverers of the semi-aquatic, egg-laying platypus were, after all, hard pressed, based on their existing experiences, to label such a thing a mammal. And yet, within logically constructed scientific frameworks the possibility of its mammal-hood could not be discounted. When, ultimately, Eco emphasizes the subtle give and take, the almost contractual nature, of the construction of shared rather than personal knowledge, the deeply-intellectual discussion takes on a much wider resonance. Shared knowledge is something that exists not just in the here and now, but unfolds backward through many-splendored centuries and touches the minds of uncountable thinkers. Umberto Eco, in this essay collection, converses with the very architects of human understanding, and it is a sight to see.