Ian Fleming was one of the great raconteurs of 20th century international life. Not surprisingly, he was also a great participant in it. Fleming was famously at the forefront of British secret intelligence during World War II, helping establish the vital No. 30 Commando unit to intercept Nazi communications. This experience was essential in creating the espionage stories of the James Bond books. Fleming, as he became a celebrity author, often met with leading figures of his time, some of whom were also big fans of his work. One of the most memorable of these meetings was with soon-to-be U.S. president John F. Kennedy.

The pair met on March 13, 1960. Fleming was visiting his friend, Mrs. Marion Leiter in Washington, DC. While Leiter was showing Fleming around Georgetown in her car, she saw the Kennedys walking by. She was due to dine with them that evening. She greeted the promenading Kennedys and asked if she could bring a guest over to dinner that night, telling them that, in fact, he was in her car right now. She introduced the two, Ian Fleming to Senator Kennedy, Senator Kennedy to Ian Fleming. 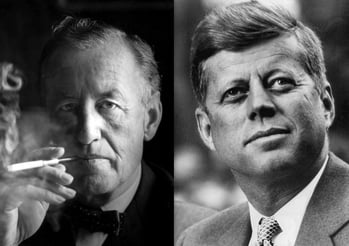 “James Bond?” said Kennedy, “But of course, by all means—do please come.” Fleming would later embellish this first encounter, instead claiming Kennedy said “THE Ian Fleming?” rather than the more recognizable name of his famous protagonist. Not only was Fleming indebted to Mrs. Leiter for this meeting, he owed to her the fact that Kennedy knew Bond at all. Five years earlier, when recovering from back pain, Leiter gave Kennedy a copy of Casino Royale to make his rest a little more exciting.

The meeting itself had one particularly memorable episode. During the dinner party, Kennedy asked Fleming how he would depose Fidel Castro, a leader who would prove to be an irritant throughout Kennedy’s short term. The Bond author suggested humiliating Castro out of office. Fleming’s plan involved dropping fake dollar bills to disrupt the value of Cuban currency and distributing pamphlets which claimed that beards attracted radioactivity, which could lead to the impotence of the beard-wearer. Castro and his associates were famously bearded men, but they would now be shamed out of their facial hair. Thus, they'd appear like regular men, argued Fleming. They would either resign themselves, or be forced out by Cubans who realized their leaders were not as invulnerable as they claimed.

The tone and intent behind Fleming’s plan has been debated, but it is most likely that he delivered it confidently, and entirely facetiously. Kennedy, renowned for his charm and humor, was amused by Fleming’s ridiculous proposal. Yet neither man could predict that the Kennedy administration would consider similarly ludicrous anti-Castro strategies, with one plot involving exploding seashells and another a poisoned cigar. 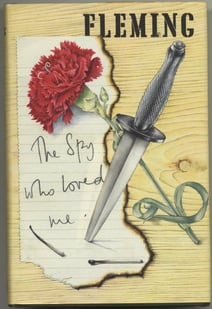 The relationship between John F. Kennedy and Ian Fleming proved thoroughly beneficial for each. JFK was a great fan of the Bond stories, and listed From Russia with Love as number nine among his ten favorite books. Kennedy, if he was ever indebted to Fleming for enjoying his novels, paid it back in abundance. Following Kennedy’s endorsement of From Russia with Love in 1961, Fleming saw the sales of his book skyrocket, and he became the highest-selling crime author in the United States.

Fleming was fully aware where the credit was due. In 1962, he wrote to district attorney Robert F. Kennedy: “I am delighted to take this opportunity to thank Kennedys everywhere for the electric effect their commendation has had on my sales in America.” As readers like Christopher Hitchens have observed, Fleming was frequently resentful of Americans. His tongue-in-cheek and irreverent tone when he first met Senator Kennedy seems to corroborate this fact. Yet he held an apparent affection for the man of Camelot. He wrote in The Spy Who Loved Me, “We need some more Jack Kennedys. It’s all these old people about. They ought to hand the world over to younger people who haven’t got the idea of war stuck in their subconscious.” And in The Man with the Golden Gun, a novel Fleming began months after Kennedy’s assassination, he depicts Bond relaxing with a glass of bourbon, reading the slain president’s memoir Profiles in Courage.

Beyond the boost in sales, John F. Kennedy went on to pay further compliments to the Bond author and his books. He once said he wished he had James Bond on his team. Journalist Henry Brandon wrote that “Kennedy... was fascinated by the line dividing Ian's real life from the fantasy life that went into his books. He often asked me how such an intelligent, mature, urbane sort of man could have such an element of odd imagining in his make-up.” He was a Bond fan till the end. It is believed that the last movie Kennedy viewed was From Russia with Love, and that he was reading a Bond novel the night before his death.

Fleming theorized why leaders like Kennedy are drawn to his books: “Perhaps because politicians like solutions, with everything properly tied up in the end. Politicians always hope for neat solutions, you know, but so rarely can they find them.” It is tempting to speculate what would have been the fate of Bond without the attention JFK helped bring. Would Fleming’s books have sold as well in the US as they did? Perhaps not. But on the cinematic front, that which brought James Bond into an entirely new medium, Kennedy may have been essential. The Bond films were financed by United Artists, an American studio, and were largely supported by the demand of an American audience. It seems that even James Bond, the most capable of characters, needed a good ally here and there to succeed.