Published in 2009, Jon Krakauer’s Where Men Win Glory: The Odyssey of Pat Tillman explores the life of football player Pat Tillman. Born in 1976, Tillman became one of the best known players for the Arizona Cardinals before leaving his multimillion dollar contract to enlist in the Army. His death in the line of duty brought controversy to the Army and U.S. government when they hid and changed details of the incident from Tillman’s family and the public. Krakauer’s work brings together the facts, painting for readers a clear picture of the details and cover-up. 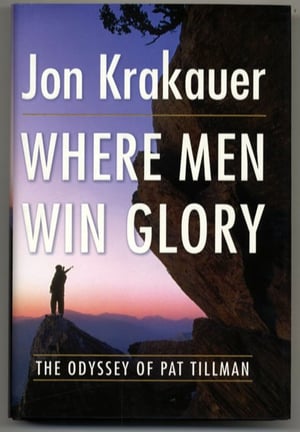 Using facts drawn from Tillman’s letters and journals, interviews with his family and fellow soldiers, and research in Afghanistan, Krakauer paints a detailed picture of Tillman’s experiences both before and after his enlistment in the Army. By focusing on his life as a whole rather than one portion of it, Krakauer allows readers to fully see the depth of Tillman’s character, both as a football star and as an honorable man who served the country.

Tillman enlisted after 9/11 in May of 2002, leaving behind his NFL contract. After two years of service, he was killed in Afghanistan. In the fallout following his death, an active campaign was waged to cover-up that he was killed by friendly fire. In the book, Krakauer explores the realities and danger of military life and the political machinations that often sacrifice those who serve. The book starts with exploring Tillman’s early life and rise to football stardom and the development of his principles that led to his enlistment.

Despite an overall positive response, some reviewers find the first portion of the book that focuses on Tillman’s early life to be slow and, according to the New York Times, “banal and inconsequential” before picking-up once the book reaches his tour in Afghanistan. Most agree the main benefit of the book is its exploration of the cover-up following Tillman’s death. Krakauer is able to bring together the evidence and facts showing the roles played by the Army commanders and the Bush administration in the scandal.

“The sad end he met in Afghanistan was more accurately a function of his stubborn idealism--his insistence on trying to do the right thing. In which case it wasn't a tragic flaw that brought Tillman down, but a tragic virtue.”

“The truth of war is not always easy. The truth is always more heroic than the hype.”

“Chaos is indeed the normal state of affairs on the battleground, and no army has figured out a way to plan effectively for, let alone alleviate, the so-called fog of war. When the military is confronted with the fratricidal carnage that predictably results, denial and dissembling are its time-honored responses of first resort.”

“There are no true answers, just shades of grey, coincidence, and circumstance.”

“War is always about betrayal, betrayal of the young by the old, of idealists by cynics and of troops by politicians.”