Charles Dodgson, better known as Lewis Carroll, always denied that the characters in Alice's Adventures in Wonderland (1865) and Through the Looking-Glass and What Alice Found There (1871) were based on real people. But the author traveled in relatively tight social and academic circles; he likely obscured his inspirations both for his own sake and for the sake of his associates. Dodgson's first tale of Alice was actually a yarn he spun for three little girls and later wrote down. The original story clearly contained harmless inside jokes that gently poked fun at people in the girls' lives. Dodgson's stories are much more personal than he let on, and scholars still speculate about the real people and events that may have inspired him.

Who Was the Real Alice?

The identity of Carroll's muse for Alice is hardly a secret, though it's still a fascinating story. Alice Liddell was the namesake of Carroll's famous protagonist--and his muse for photography for several years. Young 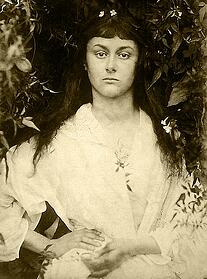 Dodgson first met the Liddells on April 25, 1856, while photographing a cathedral. Alice was only four years old. Dodgson befriended the oldest, Harry Liddell, and frequently took him and younger sister Lorina on rowing excursions. When Harry went off to school, Dodgson invited the younger Liddell girls to join him instead.

It was on one such excursion that Dodgson first wove a tale of a little girl named Alice. On July 4, 1862, Dodgson set out for Godstow for a picnic. Reverend Robinson Duckworth rowed the boat, while Edith (age 9), Alice (age 10), and Lorina (age 13) listened rapturously to Dodgson's tale. Alice was so taken with the story, she asked Dodgson to write it down for her. He obliged, even illustrating the manuscript. Dodgson called the story Alice's Adventures Under Ground.

Dodgson also presented a copy of the manuscript to editor George MacDonald, who read it to his own children and subsequently deemed it worthy of publication. Dodgson made substantial revisions and 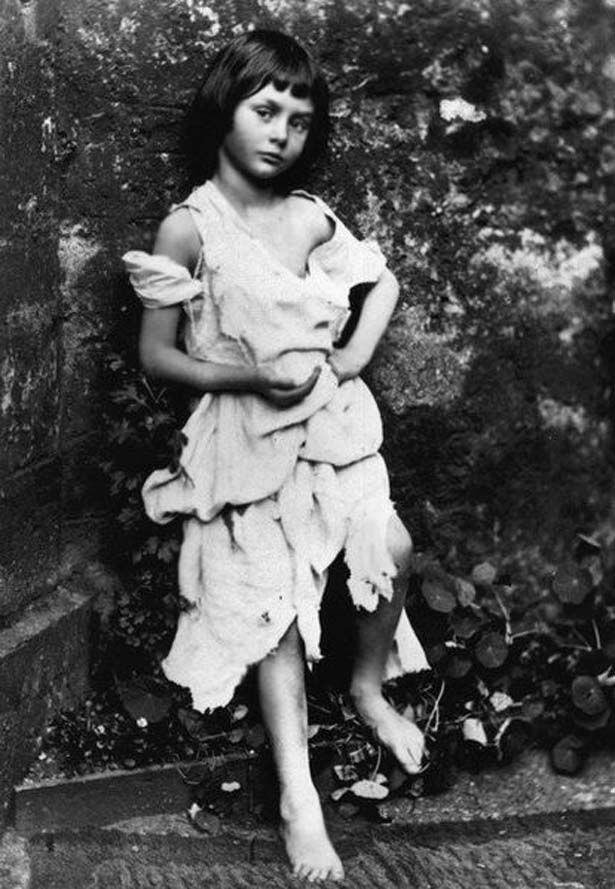 additions. He added the Mad Hatter's tea party and the Cheshire Cat. The finished manuscript was nearly twice as long as the original! Dodgson invited John Tenniel to illustrate the book, which was published in 1865 as Alice's Adventures in Wonderland

Some suggest that Dodgson's relationship with Liddell was more sinister than safe, but there's no direct evidence to support this claim. He had a number of "child-friends," as he called them and openly admitted,"I like all children (except boys)." But he appears to have been particularly attached to Liddell. Biographer Morton Cohen charted Dodgson's moments of both insomnia and torment, as recorded in Dodgson's diary. He found that both tended to correlate to the days when Dodgson saw Alice. He also made Alice the frequent subject of his photographs (as seen above).

In June of 1863, Dodgson abruptly ended his relationship with the entire Liddell family. Coincidentally, his diary is also missing its pages from April 18, 1858 to May 8, 1862. About six months after the separation, Dodgson began calling on the family again, but the relationship had already cooled and slowly faded altogether. Thanks to the "'cut pages in the diary' document," scholars speculate that Dodgson had cultivated an improper relationship 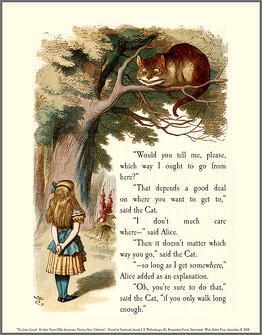 with the girls' governess, Mary Prickett. Another possibility is that Lorina had developed an unhealthy attachment to Dodgson. That might explain why Liddell's mother burned her correspondence with Dodgson; she perhaps wanted to protect Lorina from future humiliation if her feelings became public knowledge.

When Liddell married Reginald Hargreaves in 1880, Dodgson wrote her and said, "I have had some scores of child-friends since your time, but they have been quite a different thing." The Hargreaves named their third son Caryl Liddell Hargreaves, but always denied that the name was an homage to Dodgson's famous pseudonym.

Carroll's fictional Alice bears little resemblance to Liddell herself, but Alice's Adventures in Wonderland is set on Liddell's birthday and Through the Looking-Glass is set on her "half-birthday." The books are also dedicated to Alice Pleasance Liddell, and Through the Looking-Glasscontains an acrostic of Liddell's full name. Liddell's role as Carroll's muse was well known during her lifetime, and she later wrote to her sister, "But oh my dear, I am getting tired of being Alice in Wonderland. Does it sound ungrateful? It is. Only I do get tired."

Who was the Queen of Hearts?

Dodgson was generally tight lipped about the personalities who inspired the absurd characters in the Alice books. But after the tale made its theatrical debut in 1887, Dodgson admitted that the character of the Red Queen was "the concentrated essence of all governesses." He probably largely had Alice's own governess, Mary Prickett, in mind. Prickett worked as the Liddells' governess from the time the family arrived in Oxford in 1856 till she got married in 1870. If Dodgson had indeed attempted to court Prickett (as the "'cut pages in the diary' document" suggests) and failed, he certainly might have had reason to portray her character as less than pleasant. 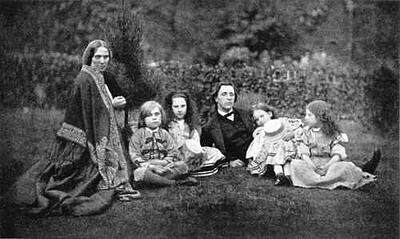 Prickett with the Liddell children and Lewis Carroll

The name "Prickett" is relatively distinctive and quite common in the neighboring town of Binsey, so people--including Dodgson-- likely assumed that Prickett hailed from Binsey. The village also happened to be the location of the "treacle well," of which Dormouse tells a tale at the Mad Hatter's tea party. The well was located in the graveyard of St. Margaret's Church, which was where the first miracle was performed by Oxford's patron saint, Frideswide. The well was said to have curative powers, and during the Medieval period "treacle" meant "medicine" or "healing liquid." 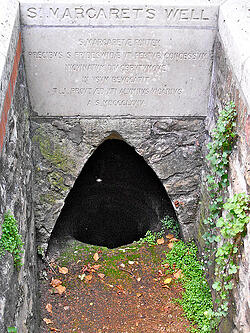 As an alum and faculty member at Oxford, Dodgson would have been familiar with this legend, and of Prickett's likely connection to the area. Dodgson also includes more subtle details alluding to Prickett. For instance, the Red Queen is "the thorny kind," an allusion to the Liddell' girls' nickname for Pricket, "Pricks." It's also a pun on Thornbury , which was the Saxon name for the site of St. Margaret's well.

Prickett did not, in fact, come from Binsey. Her father was from Oxford; her grandfather, from Thame. Whatever her origin, she maintained a great fondness for the Liddell family even after leaving their service. Prickett went on to manage the Mitre Inn with her husband. Caryl Hargreaves visited the inn and stayed in Prickett's quarters. He found the rooms full of pictures of the Liddell children.

Who Was the Real Mad Hatter?

On March 19, 1931, The Times published a letter from Reverend Gordon W Baillie. He said, "All Oxford called him The Mad Hatter. He would stand at the door of his furniture shop...always with a top hat at the back of his head, which, with a well-developed nose and a somewhat receding chin, made him an easy target for the caricaturist." The man of whom Baillie writes is none other than Theophilus Carter of Oxford, and the caricaturist he refers to is John Tenniel. 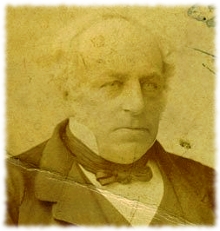 For decades, Baillie's explanation has been accepted. Carter, it was assumed, had committed some undocumented offense against Dodgson and earned himself caricature as the Mad Hatter. But this theory took sixty years to emerge, likely because there simply was no other obvious candidate. Following Baillie's letter, people seemed to glom on to the idea. WJ Ryland wrote to The Times a few weeks later, noting that Carter had submitted an "alarm clock bed," which dumped its occupant out at the appointed hour, at the 1851 Great Exhibition at the Crystal Palace, illustrating Carter's eccentricity. It's true that two such contraptions were exhibited, but neither was associated with Carter. 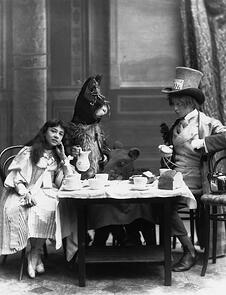 Liddell's correspondence, however, offers another possibility. She published only one recollection of her childhood, which appeared in the July 1932 edition of Cornhill Magazine. Liddell recalls that a "special pleasure was to be allowed to take Rover out for a walk. Rover was a retriever belonging to a well-known Oxford tailor, called Randall." Thomas Randall was an Oxford tailor, but he more frequently referred to himself as a hatter. Alice and her sisters regularly visited the Randall home, so she would have been quite familiar with him.

Dodgson would also have known him, at least as a personality. Randall was embroiled in the "Town and Gown" dispute with Oxford University in 1848. The disagreement pitted local merchants against Oxford for its failure to control students properly. Oxford students were known to run up incredible bills with local clothing merchants, who assumed the students' parents would pay the bills. But as more and more students were found to be truly penniless, the merchants banded together and pressured the university to watch the students more closely. Randall was particularly vocal during the entire dispute--and he was hardly conciliatory.

Yet his harsh stance apparently did little to affect public opinion; he was elected Mayor of Oxford in 1859. The government official may also have been on Dodgson's radar for quite another reason: Randall was 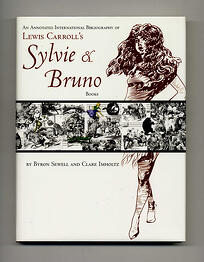 known to be "scholar enough to do verses and essays, as well as impositions, for the incapable and the idle." Dodgson's associate GW Kitchin corroborated this statement, so it's likely that Dodgson knew Randall as an unscrupulous fellow who helped Oxford students to cheat.

Whatever the inspiration behind Charles Dodgson's characters, the story of Alice has endured for generations. It remains a popular focus for collectors of Victorian literature and children's books. Editions are numerous, and it's quite easy to build a substantial collection around Alice books. If you're interested in collecting Alice or Lewis Carroll books, start with Charles Lovett's annotated bibliography of Carroll's contributions to periodicals. Byron Sewell and Clare Imholtz also edited an international bibliography of Carroll's Sylvie & Bruno books, which is another excellent reference for collectors.