Who Was the Mother of Mother's Day?

This year marks the official centenary of Mother's Day: on May 9, 1914, President Woodrow Wilson issued a proclamation establishing Mother's Day as a national holiday and making its official celebration on the second Sunday in May. But the holiday had been celebrated in various forms for many years. Thus the holiday's origin is a bit complicated. Numerous people--mostly women--could claim credit for Mother's Day.

Anna Reeves Jarvis (1832-1905) was a West Virginia activist who started Mothers Day Work Clubs to lower infant mortality. Attendees learned how to keep their children healthier by improving sanitation and curbing milk contamination. When the Civil War broke out, these women also banded together to care for soldiers on both sides of the conflict. 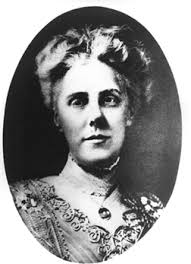 After the war, the country remained harshy divided. Jarvis saw an opportunity for reconciliation in motherhood; she reasoned that women on both sides had lost their children and could empathize with other mothers in the same situation. Jarvis established Mother's Friendship Day, where mothers would come together for picnics and other events. The events focused on mourning fallen soldiers, reconciliation, and preventing violent conflicts in the future. Later, Jarvis' daughter Anna would again transform Mother's Day.

Despite the objections of her husband, Julia Ward Howe (1819-1910) became very involved in reform efforts. She was particularly interested in abolition, women's rights, education, and prison reform. An adept writer, Howe edited her husband's newspaper, The Commonwealth, which many saw as little more

than incendiary abolitionist propaganda. Howe's first volume of poetry received little attention, but her "Battle Hymn of the Republic" (1861) made her a national celebrity. She rubbed elbows with Boston's elite, including William Ellery Channing, Theodore Parker, and Thomas Wentworth Higginson. Howe could even name Samuel Clemens (better known as Mark Twain) among her friends and colleagues.

In 1870, Howe published a broadside entitled "An Appeal to Womanhood throughout the World." It would later come to be known as the "Mother's Day Proclamation." In this open letter, Howe exhorted the women of the world to organize themselves and work toward attaining world peace. Howe's celebrity certainly gained widespread attention for the cause in ways that her predecessors could not have imagined. In 1873, Howe campaigned to make June 2 Mother's Peace Day.

Juliet Calhoun Blakeley (1818-1920) hailed from Albion, Michigan, which was the national headquarters for the Prohibition National Committee in the 1870's. The movement had considerable support in the community, but some "saloonists" still called the city home. On Friday, May 11, 1877, saloonist leaders

captured three local boys, all sons of temperance leaders. Two of the boys were Blakeley's own son Charles, and Charles Daughterty, the son of local Methodist minister Rev. Myron A Daughterty. According to Charles Blakeley, the boys were taken to a local saloon and "were induced to indulge in liquor [alll night long]....About noon Saturday, when the streets of Albion were lined with crowds of shoppers, the youths...were turned loose to mingle, while intoxicated, among the crowds in the business section of the city."

On Sunday, May 13 (Blakeley's birthday), Reverend Daughterty took the pulpit to deliver his sermon. But "the grief which resulted from finding his son intoxicated the day before made it necessary for him to leave the pulpit ere the services had been concluded." According to local legend, Blakeley stood up, took the pulpit, and urged the women of the congregation to assist her in finishing the service--and to support to temperance movement. Such was the first "Mother's Day' service in Albion. Saloonists were so angry, they vandalized Blakeley's home. But her sons began commemorating the day on the second Sunday of each May. Traveling salesmen, they encouraged their friends and business associates to follow suit. The Methodist Church of Albion adopted the practice, even printing out postcards in Blakeley's honor.

Mary Towles Sasseen (1860-1906) came from a prominent family in Henderson, Kentucky. Her lineage stretched all the way back to the Revolutionary War, and her grandfather had been a respected judge. In 1893, Sasseed published a pamphlet advocating the celebration of Mother's Day on April 20, the date of her own mother's birth. The booklet contained Sasseen's own poetry, along with a collection of statements and verses abut mothers from noted men. Sasseen included passages about the influence of mothers on great men in history. 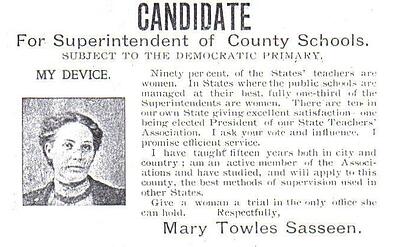 Sasseen had the work copyrighted the same year. She then embarked on a campaign to get the holiday recognized nationally. She traveled extensively, addressing educational societies and other organizations. Her first success: the Kentucky legislature voted to recognize the holiday. And in 1894, all the public schools in Springfield, Ohio formally celebrated the holiday. By 1899, Sasseen was a candidate for superintendent for public instruction in Kentucky. It was generally acknowledged throughout the state that Sasseen had originated the idea of Mother's Day. The following year, Sasseen married Judge Wilson, and the couple moved to Florida. Sasseen died in childbirth there in 1906, and her legacy remains largely unknown.

Who knew there was a "Father of Mother's Day"? Frank Hering (1874-1943) might seem like an unlikely champion for a holiday honoring women; a former football player, Hering coached football, basketball, and

baseball. The history professor also served as the first athletic director at the University of Notre Dame, earning him the moniker, "the father of Notre Dame football" because he elevated the sport from an intramural activity to an intercollegiate competition.

Hering visited the classroom of a fellow professor and found his colleague distributing penny postcards to their students. He asked what the postcards were for and found that the professor did a "mother's day" every month: on that day, students had to write postcards home to their mothers. Hering loved the idea. On February 7, 1904, he spoke at a memorial service organized by the Fraternal Order of Eagles in Indianapolis. On a bit of a whim, he suggested a national day to honor mothers to his audience. The Fraternal Order of Eagles loved the idea and helped Hering promote it through grassroots efforts. When Hering served as national leader of the organization from 1909 to 1911, he used the position to popularize the observation of Mother's Day. His efforts would serve to support and complement those of Anna Jarvis.

When Ann Reeves Jarvis passed away in 1905, her daughter Anna Jarvis (1864-1948) decided to follow in her mother's footsteps. Though Jarvis never married or had children of her own, she passionately campaigned for Mother's Day. Jarvis announced her 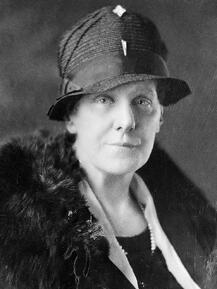 intention to establish a national holiday on the first anniversary of her mother's death. She partnered with Philadelphia retailer John Wanamaker to make the day a holiday for going home and recognizing the sacrifices of one's mother. Wanamaker hosted Mother's Day events in his store, and celebrations were also held in Jarvis' native town of Grafton, Pennsylvania.

Initially Jarvis worked hand in hand with various retailers, including the floral industry, to gain recognition for the holiday. By 1911, most cities and states already recognized Mother's Day. But once the holiday attained official status, it quickly became a commercial cash cow. Disgusted with what the holiday had become, Jarvis incorporated herself as the Mother's Day International Association. She organized boycotts and filed lawsuits. Her new goal was to undo all her previous work and get Mother's Day removed from the national calendar.

Jarvis even attacked First Lady Eleanor Roosevelt for using the occasion of Mother's Day to solicit money for charity. The American War Mothers also used Mother's Day as a fundraiser; the organization sold carnations on the holiday every year. In 1925, Jarvis interrupted the American War Mothers' convention and got herself arrested for disturbing the peace! She did no jail time and immediately recommenced her campaign. Jarvis spent virtually all of her fortune in the effort, which she continued until at least 1940. She died almost penniless in the Marshall Square Sanitarium in 1948.