Who Was the Real Miss Moneypenny?

While writing his famous James Bond series, Ian Fleming often found inspiration in real people and events. Many of his characters borrowed their traits or names from Fleming’s old friends, rivals, or high-profile figures in the news. Discovering the backgrounds behind your favorite characters could add a fun new layer to your reading experience. 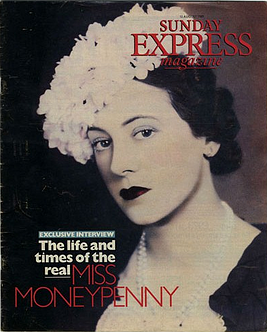 A leading "Bright Young Thing" of the 1920's, Loelia Mary Ponsonby was better known as Lady Lindsay of Downhill. She was first (unhappily) married to the second Duke of Westminster, where she honed her skills as a socialite and hostess. Winston Churchill was best man at the wedding. Ponsonby found greater happiness in her second marriage, to Sir Martin Lindsay of Downhill. Meanwhile, she was friends with none other than Ian Fleming, and it's widely accepted that the steely yet playful character of Miss Moneypenny is based on Lady Lindsay. She was even featured in Sunday Express Magazine in an article called "Golden Girl: The Life and Times of the Real Miss Moneypenny," which has become a scarce item of Bond ephemera.

Miss Moneypenny was influenced by several real-life people. In her debut, she initially went by Miss ‘Petty’ Pettaval, a name borrowed from the woman who actually held in Miss Moneypenny’s job. Kathleen Pettigrew was M16 Director Stewart Menzies’ personal assistant.  In the novels, Miss Moneypenny assists “M,” Bond’s boss and M16 director. Fearing the connection was too obvious, Fleming eventually changed the name.

Fleming found Miss Moneypenny’s tougher side in Paddy Risdale, a secret service secretary whom Fleming often interacted with at the Naval Intelligence Department during his years as an intelligence officer. Similar to the relationship between Miss Moneypenny and James Bond, Fleming and Risdale were rumored to have a flirtatious relationship, but not one that went any farther than that.

Fleming dated Joan Bright Astley during World War II, and she became another rumored source for the character of Miss Moneypenny. Astley worked in the Special Information Centre, where she met Fleming.  Their relationship was not serious, and she described Fleming as a ruthless man who would end relationships as abruptly as he began them – yet many believe that Astley left her mark on Fleming, lending her warm and professional personality to one of his favorite characters.

The discussion about Miss Moneypenny’s real-life counterpart could go on and on. Other women who have been suggested as influencers include Fleming’s secretary, Joan Howe, and Margaret Priestly, who ran a commando assault unit. Although Fleming never met her in person, Jean Frampton was referred to as his own Miss Moneypenny. Frampton typed the manuscript for Casino Royale and helped him brainstorm new story ideas.

Miss Moneypenny through the Years

With such a variety of women behind her creation, Miss Moneypenny was clearly a beloved character – both for Fleming and his readers. Her development over the years is interesting to track. Although she was a minor character, Fleming referred to her as his second favorite character – after Bond, of course. He originally envisioned a strictly professional relationship between the two, although Miss Moneypenny understands Bond in a way that no other characters do, and later works would create a romantic chemistry that is never acted on.

Miss Moneypenny isn’t given much of a backstory until the 2012 Skyfall movie, but despite her small role and lack of traditional character development, Fleming managed to create a fan-favorite character who exhibits the complexities of the real women he based her on.