When I think of a book by Sir Walter Scott, it is handsome and old. This is not an accident. In truth, it reflects my physical relationship with his classic novels, which are admittedly less popular than they were even 50 years ago. In my memory (and on my bookshelf), Walter Scott’s novels, like Waverley and Ivanhoe, are in brown hardcovers, purchased secondhand or inherited from grandparents. I can’t recall the last time I saw a Scott novel on a bookstore table, or in a hip new redesign like those an Edith Wharton or Charles Dickens title might receive. In fact, he seems barely read at all. It raises the question: What happened to the pioneer of the historical novel? 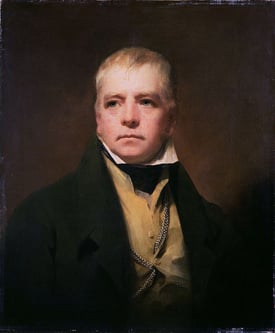 Like many authors who go from famous to forgotten, Scott has become less read as his transformation of British culture has become more or less complete. The medieval and historical romances of Sir Walter Scott not only helped to define Scottish identity, it altered a massive country’s conception of itself. Some have remarked were it not for Scott’s historical gaze, the buildings of Parliament would have been built in the neo-classical rather than neo-gothic style. There would have been less of the Scottish baronial style, and the Scottish Highlands would be a less desirable place for tourism and residence. Even Mark Twain, an ocean way, invoked the bard of chivalric romance and grandeur when he characterized the South’s attachment to the past as the “Sir Walter Scott disease.”

“Greet scoot, duckings, and thuggery,” chided James Joyce in Finnegans Wake, setting up a pantheon of British writers consisting of Scott, Dickens, and Thackeray. In an effort to make assimilation easier for the country’s new immigrants, President Woodrow Wilson encouraged the reading of Walter Scott novels, patriotic in intention and formative to the mother country of Great Britain, placing Scott in the echelons of required high school reading for decades, until the practice fizzled out in the '60s or so.

Some of Scott’s politics will still capture our interest, such as his creation of humane and respectable Jewish characters. Other contributions, like his redemption of the Scottish Highlands, his exaltation of the Magna Carta, the popular imagining of Robin Hood, the connections he drew between the monarch and Scotland, will seem less interesting. That is the consequence of being a cultural pioneer: eventually the radical changes you effect become matter-of-fact to generations who inherit them. 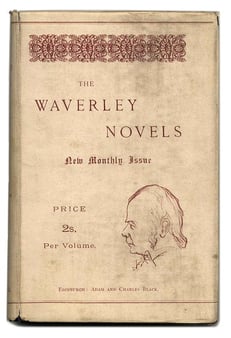 Perhaps framing Walter Scott as a historical author is part of the problem: it is not for his historical or long-accomplished cultural contributions that we would enjoy him today, but for the enduring art of his novels. His first novel, Waverley, introduces the titular character, who like Don Quixote, is consumed by the fancies and romances on the page, and soon mounts his own (Waverley, in supporting the Jacobite rebellion of 1745, at least has a real conflict to fight in). But like Cervantes and Laurence Sterne, that other master of irony beloved by readers today, Scott’s work contains a knowing sense of humor. "Shall this be a long or a short chapter?” says the narrator in Waverley, “This is a question in which you, gentle reader, have no vote, however much you may be interested in the consequences."

Virginia Woolf praised Scott as "perhaps the last novelist to practice the great, the Shakespearean art, of making people reveal themselves in speech,” and in his time, Scott was likened to Shakespeare, especially for his ability to create a wide cast of characters. Though he wrote fast (“unskillfully” admitted a contemporary critic who was a fan of his work), he wrote ambitiously, and often hit the mark.

Scott did switch fates with his contemporary, Jane Austen, who disliked Scott’s novels, and grew in fame with time as her renowned rival faded into obscurity. We have gained much in lifting up Jane Austen since her death. There is nothing forbidding us, other than our patience and taste, from lifting Walter Scott up to prominence once again.