William Golding: From the Darkness of War to Man's Latent Evil

Almost everyone who graduated from an American high school in the last few decades knows William Golding as the author of Lord of the Flies. However, his body of work - for which he was awarded the 1983 Nobel Prize for Literature - is much more extensive. He was a poet and a playwright, as well as the author of essays, short stories, and fifteen novels. 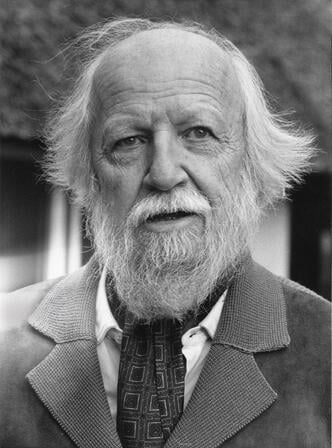 Golding was born in Cornwall, England in 1911. His father was a science educator and his mother was a homemaker active in the women's suffrage movement. Golding was a good student who studied natural science and then English literature at Oxford. He graduated with honors in 1934 and soon after published a book of poems.

He married Ann Brookfield in 1939 and joined the Royal Navy in 1940. Golding's experience during World War II, including commanding a landing ship during the invasion of Normandy, forever altered his opinion of humanity. “I began to see what people were capable of doing. Anyone who moved through those years without understanding that man produces evil as a bee produces honey, must have been blind or wrong in the head.”

The horror of those years stayed with him for his whole life; “My yesterdays walk with me. They keep step, they are the gray faces that peer over my shoulder.” This would not come as a surprise to his readers. His writing is consistently trying to make sense of the good and evil struggle, not so much as two external opposing forces but rather as they battled in each of us. His writing is dark, rich with metaphor, and deeply concerned with the ugly side of human nature. 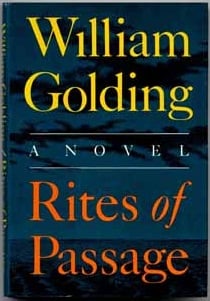 Rites of Passage, for which he won the Man Booker Prize in 1980, tells the story of a young aristocrat’s sea voyage to Australia. Unsurprisingly, the lighthearted, almost comic writing with which it begins, quickly deteriorates into a tragic story about group humiliation and casual cruelty. It is smart and brutal and sheds a harsh light on humanity. Close Quarters (1987) and Fire Down Below (1989), together close out the trilogy To the Ends of the Earth.

Perhaps Golding's most direct critique of human nature can be found in his second novel, The Inheritors (1955). The story centers on the fading days of the Neanderthal race and - in characteristic style - their tragic encounter with “new humans.” Golding portrays the Neanderthals as simple and decent, while the new humans are baffling and cruel. The story stays firmly in the Neanderthal perspective until the final chapters. Here we are finally given a glimpse into the humans’ minds. The conclusion becomes even more devastating with the revelation of the main motive for the humans' malevolence.

This is the type of writing he is famous for. His collected works can be seen as a parable for what happens to people encountering a situation outside their normal lives. He warns us of our latent cruelty when removed from regular society and its clear rules about “civilized” behavior. He reminds us that the “defects of society are directly traceable to the defects of the individual.” Golding died from heart failure in 1993 with his novel, The Double Tongue, still unfinished.