William Morris and the Kelmscott Press

“Apart from the desire to produce beautiful things, the leading passion of my life has been and is hatred of modern civilization.” – William Morris

In the late 1700s, the industrial revolution took root and quickly propelled society toward a future of consumerism and commoditization. Although this period in history brought about many positive changes in the lives of working class citizens, the era was not without its shortcomings. Beauty was exchanged for practicality, time was equated to money, and the jobs that once needed the skill of human hands could be replicated by machinery. One example of modernization was the printing industry. Books were being produced more mechanically than ever before, which left the pages filled with words but void of soul. A man named William Morris recognized the loss of an art in modern society, and aimed to counter it.

William Morris was born on March 24, 1834, and passed away on October 3, 1896. Over the course of his 62 years of life, Morris embodied the role of poet, novelist, social activist, and artist. He was passionate about many things, and he brought those passions to life through perseverance and hard work. Perhaps one of his greatest contributions to the world of art and literature in the wake of the industrial revolution was the development of the Kelmscott press.

Morris constructed the press in his home, Kelmscott manor, in 1891. He was a craftsman who refuted industrialism, believing that modern printing methods were absent of true skill. Opposed to the mass production of books by modern printing practices, the Kelmscott press sought to maintain the artistry once found in medieval texts and manuscripts. Creating his own typefaces, making his own paper, and printing by hand, Morris was the master of his personal “typographical adventure.” Remarkably intricate designs upon fine linen paper created a one-of-a-kind reading experience that that was both visually captivating, and easy to follow. Each book was a unique canvas with distinct ornamentation and aesthetic. 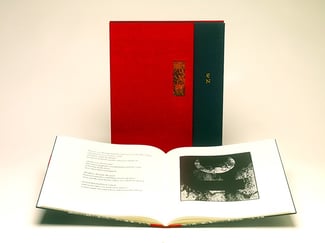 Although the Kelmscott press only operated for seven years, it brought a renewed appreciation of quality over quantity in the world of printing. To this day, fine presses such as Heavenly Monkey, and Nawakum Press aspire to similar standards of beauty and art. According to William Morris:

As a lover of the written word, it does one's heart good to see beautiful stories enveloped in beautiful vessels. Morris understood the value of words, and reflected that understanding through the creation of the Kelmscott press.