The author himself once referred to it as “my apocryphal county.” A Frankensteinian creation of two very real regions, Yoknapatawpha County is home to a number of William Faulkner's most famous novels and stories, including the famed Snopes family trilogy, which features the novels The Hamlet (1940), The Town (1957), and The Mansion (1959). Faulkner’s fictional county is a landscape fraught with struggle and conflict, a place of drifters and vagrants, the morally apathetic and the socioeconomically disenfranchised. It’s a region of extreme racial tension and inequality, with a storied history of slavery, succession, KKK activity, Jim Crow laws, and discrimination.

Which is perhaps why it makes perfect sense Faulkner chose to set so much of his work in this invented-yet-wholly-reflective-of-real-life setting, particularly his Snopes family novels. But to truly understand the choice of Yoknapatawpha for the Snopes, one must understand more clearly how the county came into being and the ways in which Faulkner pulled from history — and his own life — to create such a haunting, mythic place.

Literary scholars have long held Yoknapatawpha County is Faulkner’s combination of LaFayette and Oxford counties, two neighboring, rural areas of Mississippi where Faulkner spent a considerable amount of time. The name of the county is derived from the language of the Chickasaw Indians, meaning ’split land,’ which is already rife with the kind of irony Faulkner would appreciate given the manner in which the Chickasaw were driven from their land by settlers and the decades of intense conflict that followed over slavery, Reconstruction, and segregation.

Faulkner drew heavily on the real-life residents of both counties for the characters that would make up Yoknapatawpha, especially for the Snopes family — Ab (the patriarch), his wife, daughter, and Flem, his only son. As evidenced in an interview with The Paris Review*, Faulkner had a contentious relationship with the regions on which he based Yoknapatawpha, which may very well account for the dreary, somewhat hopeless way he portrays the fictional place and those who reside there. Faulkner said:

“...I discovered that my own little postage stamp of native soil was worth writing about and that I would never live long enough to exhaust it, and that by sublimating the actual into the apocryphal I would have complete liberty to use whatever talent I might have to its absolute top.”

"It opened up a gold mine of other people, so I created a cosmos of my own. I can move these people around like God, not only in space but in time too.”

So what exactly makes Yoknapatawpha the perfect-storm setting for the Snopes family? 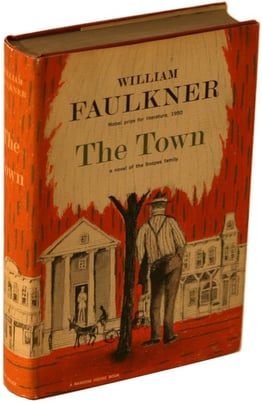 For starters, Faulkner often referred to the county as a place where those struggling to fit into society drag up. We don't really know how the Snopes family lands in the town of Frenchman’s Bend in The Hamlet; Faulkner gives very little backstory as to how and why the Snopes settle there, creating an aura of mystery and suspicion around the family and their past that accumulates throughout the trilogy. The Snopes also struggle to fit into the social structure of Frenchman’s Bend, alienating them from the rest of the townspeople, which sets the stage for tension and conflict in the subsequent novels.

Acts of theft, violence, and sexual impropriety populate the second novel in the trilogy, The Town, wherein we see the Snopes family from several different points-of-view, some of which compete with each other for the accuracy of the narrative and serve to create fissures within the family that result in members choosing sides and working across purposes to the detriment of those they align against.

The final installment, The Mansion, deals primarily with the extreme consequences of the Snopes family as tested by deceit, lies, and emotional and physical anguish, themes Faulkner asserts are integral parts to Yoknapatawpha.

In total, the county was used as the setting in 17 of Faulkner’s novels and story collections. Faulkner had invented and established Yoknapatawpha long before he began the Snopes novels, first introducing the county in the 1938 novel The Unvanquished. But given the turmoil put center stage in the Snopes novels, it’s easy to see why Faulkner chose Yoknapatawpha as the place to explore a tumultuous family in a tumultuous point in American history.

*For full text of The Paris Review interview with Faulkner, click here.