A Brief History of the Printing Press, Part II: Toward a Modern Press

In part one of our history of the printing press, we reviewed the early days of the printing press, from Gutenberg’s original press to Clymer’s wildly successful Columbian press. Today, we will take a look at the last widely distributed hand press and the move onto the cylindrical press. These presses set the stage, and naturally lead us to the fully automated offset printing presses that power the massive publishing houses of today.

Shortly after the success of the Columbian press, the Albion press, invented by R. W. Cope in 1822, came onto the scene. It was used well into the twentieth century. Cope’s initial version of the press was unsuccessful due to its propensity towards mechanical failure. He would not live to see the improvements made to his design which would eventually allow it to gain popularity in the 1840s. By that time, nearly 40 different manufacturers were advertising some version of the Albion press.

Unlike its contemporary, the Columbian, the Albion press was marketed at around £6,600 in today’s currency, nearly £2,000 less than the Columbian. The Albion press was used by the poet William Morris to print what is quite likely one of the finest books to have ever been produced, Kelmscott Press’ The Works of Geoffrey Chaucer. The Kelmscott press went on to have a wide influence in the fine press industry.

Moving toward a cylindrical press 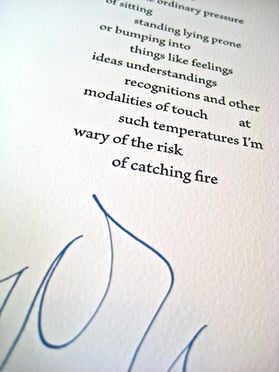 The Albion was the last of the successful flat platen presses. The next major innovation was the powered cylindrical platen, which, when coupled with the automatic inking technology developed in the late eighteenth century, allowed for the quadruplication of pages per day. For reference, The Times was impressing about 1,100 pages per hour in 1814. In general, these machines would use a cylindrical platen to roll over the forme instead of pressing the page all at once, thereby eliminating the necessity of a pressman to move the lever back and forth. This allowed for more rapid printing.

These types of presses are most similar to those used by the artisan letter pressing industry today. Nawakum Press uses a Heidelberg Cylinder press to produce some of their beautiful books. A page of In A Single Gesture printed by Nawakum is displayed to the left.

This, of course, was the seed of the modern rotary press and then, the offset press. Yet three major developments were still necessary: first, the invention of the cylindrical forme or plate that would work in tandem with the platen; second, the continuous roll of paper to be fed through the forme and platen; finally, the addition of steam-power.

The drive for innovation that eventually led towards these, was, as it had so often been, the newspaper industry. John Walter, manager and editor of The Times, approached Augustus Applegath about improving upon the cylindrical press to accomodate the paper's increasing demand. Applegath devised a press that was, at the end of the day, simply four presses combined. Four cylinders rolled across a moving bed and forme which was inked by four ink rollers immediately after the impression was made and the paper released. Upon re-inking, a new page was fed into each cylinder, thus repeating the process. Therefore, the new machine could produce exactly four times as many impressions per hour as the previous machine.

Applegath soon found himself in financial despair and sold his printing house to William Clowes who would go on to found William Clowes Ltd., the largest printer of directories and phone books in the United Kingdom. Clowes maintained his presence in the printing industry by introducing steam-power to the cylindrical machine, automating all parts of the process, including the paper feeding. Feeding - if the printers wished to overcome the most time consuming part of printing - had to be reformed. The most obvious solution was to print onto a continuous roll of paper instead of individual sheets. At the time, the only real obstacle to overcome in order for this development to be realized was the paper tax in England. Once the tax was repealed in 1861, rolls of paper quickly became part of the cylinder press world, with one young man winning a diploma, "for a sheet of printed paper, about eighty feet in length, containing ten copies of the life of Robinson Crusoe," at the tenth annual American Institute fair. More complex was the development of a curved plate, which was preferred against the curved chase and forme. The continuous roll of paper would be fed in between the cylindrical stereotyped plate and the cylindrical platen, all three of which can be seen in the photograph of the old New York Times press to the right. With automated and continuous inking, this sort of press can print as fast as the mechanisms themselves are able to go. Once this technology was developed, it opened the doors for the industry to begin printing at the magnificent speeds it does today.

One further development arises before we come to the offset printing presses, the most common mass market presses used today. The offset printing press would take the ideas of the rotary press, except that instead of having the paper come into direct contact with the plate, a rubber roller would transfer the ink on the plate to the paper between the roller and the cylindrical platen, thereby preserving the life of the plate by withholding pressure from being applied to it. Thanks to offset machines and the development of near-immediate plate stereotyping, The New York Times Queens printing facility is able make 11,000,000 impressions between seven presses in one, two hour period to print its regions papers every morning: nearly 219 impressions per second per press.

In this survey much has been left out; but then again, brevity was always the goal. We have, however, shown much of the important history of the printing press: how we came from Gutenberg's simple wooden press to the revolutionary rotary presses that power today's high-output printers.

Catch up on Part I of our survey here.