A Collector's Overview of Orhan Pamuk

Nobel Prize-winner, Ferit Orhan Pamuk, was born to a wealthy Turkish family on June 7, 1952. His novels have been translated into 55 languages and his work has sold over eleven million copies worldwide. As a child and young adult, Pamuk devoted himself to painting. Yet at age 23, he put his paints aside and began writing his first novel, Cevdet Bey and Sons. 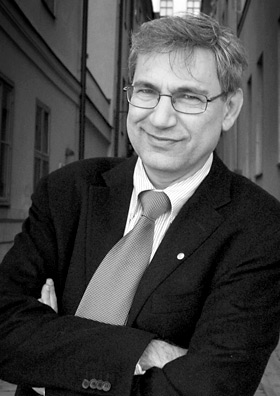 Pamuk’s difficulty finding a publisher for Cevdet was the first of many struggles between him and the Turkish establishment. Despite the fact that the manuscript of Cevdet won a prestigious award, it took four years before he could secure a publisher.  Pamuk points to this time as one of the biggest challenges he faced as a writer. Yet once his works were in print, Pamuk quickly became Turkey’s best-selling author.

Matters seemed on the mend when Turkey offered Pamuk the position of “state artist” in 1998. He rejected it, however, and stated that if he had accepted he could not have “look[ed] in the face of people [he cared] about.” Later, in 2005, Pamuk spoke out against the Armenian genocide and was put on trial for “insulting” the Turkish Republic. He received death threats and his books were burned. After international outcry on his behalf—including a joint statement made by authors José Saramago, Gabriel García Márquez, Günter Grass, Umberto Eco, Carlos Fuentes, Juan Goytisolo, John Updike, and Mario Vargas Llosa—charges were dropped in 2006. Later that year, he was awarded the Nobel Prize for Literature.

Pamuk continues to write as well as teach comparative literature and writing at Columbia University. He says, “Those who know me well understand how dependent I am on writing, tables, pens, and white paper, but they still urge me to 'take a bit of time off, do some travelling, enjoy life!' Those who know me even better understand that my greatest happiness is writing, so they tell me that nothing that keeps me far from writing, paper, and ink will ever do me any good. I am one of those rare happy creatures who have been able to do what they most desired, and who have been able to devote themselves to that task to the exclusion of all else.”

The story of Istanbul lawyer Galip, who one day finds that his wife Rüya has mysteriously left him with little explanation. He wanders around the city looking for his clues to her whereabouts. As he gets more involved in the mystery, events take a dark turn. When Galip starts receiving death threats, he begins to fear the worst. Translated by Güneli Gün from the 1979 Turkish publication of Kara Kitap, his second book translated into English.

A young Italian scholar sailing from Venice to Naples is captured by the Turks. He saves himself from life as a galley slave by claiming to be a doctor. In Constantinople, he becomes half-astrologer, half-doctor to a Turkish savant who is eager to learn about scientific and intellectual advances in the West. The White Castle is Pamuk's story of these two men, set in the seventeenth century. Translated by Victoria Holbrook from the 1979 Turkish publication of Beyaz Kale, his first book translated into English.

Celebrated Turkish novelist and Nobel Prize winner Orhan Pamuk writes a luminous memoir of his home town. Caught between Europe and Asia, Pamuk discusses the effect geography and the clash of cultures has played in the city's loss of identity, reflecting especially on the sadness of living amid a lost empire. He also recounts life-changing events in his younger days, his journey into adulthood, and his growth as an author.

Ka, a Turkish poet who has spent 12 years in political exile in Germany, returns to his homeland on a mission. He travels to the small town of Kars ostensibly to report on the rash suicides among young women forbidden to wear their headscarves. But he also hopes to reunite with the lovely Ipek, a girl he knew as a young man. He discovers that Ipek is recently divorced and makes the acquaintance of a charismatic terrorist.

Other Colors: Essay and a Story

A personal selection of Pamuk's best articles and essays from twenty-five years' work, including autobiographical reflections on Pamuk's first passport and his first trip to Europe as well as discussions of literature, culture, and politics. He discusses the work of contemporary writers, his own books, his relationship with his daughter, and his reflections on loneliness. A wonderful compilation of Pamuk's best nonfiction.