A Glossary of Book Terms Part II: The Art of the Book

The vocabulary of the rare book world can be daunting, especially for new collectors. In this series of blog posts, we attempt to explain and illustrate some of the basic terminology. Our last post focused on the anatomy of a book; here we turn our attention to printmaking and decorative features. 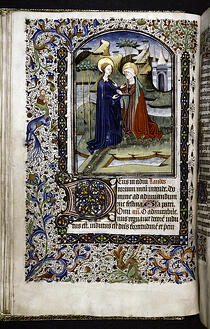 Blind & Foil stamping – An impression that is embossed onto cloth or leather binding, and sometimes on paper. Blind stamping is a simple indentation into the leather, whereas foil stamping fills the impression with gold ("gilt stamp"), silver, or other metallic leaf.

All Edges Gilt (AEG) or Top Edges Gilt (TEG) – Refers to the edges of the text block that have gold leaf applied.

Illuminated, Illumination – An illuminated manuscript or an illuminated book is one in which the text is enhanced by hand decoration or illustration. These decorations are often used on initial letters, page borders, and marginalia. Illumination was practiced most during the Middle Ages and into the era of the printing press, though it is still used today to create unique and rare books.

Intaglio - A family of printmaking techniques in which the image is incised into a surface. Normally, copper, wood, or zinc are used as a surface, and the incisions are created by etching, engraving, drypoint, aquatint, or mezzotint. 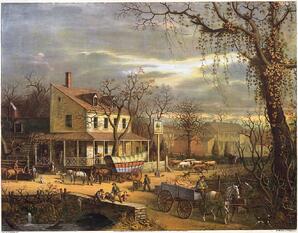 Lithography – A method for printing using a stone with a completely smooth surface. A image is drawn onto the stone with an oil-based ink which is then imprinted onto the paper. This technique allowed the artist to work directly on the stone, eliminating the middle man (as opposed to etchings or engravings). Chromolithography is used to create colored prints with many separate plates and was very popular in the 19th century.

Relief - Opposite of intalio. A family of printmaking techniques in which the image is raised from the surface. This is done by carving away all negative space in the image. The raised areas hold ink and the recessed areas do not. A rubber stamp is a common example of relief printing. 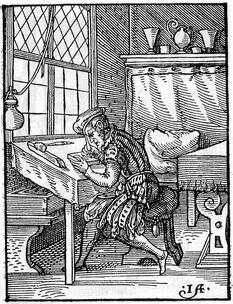 Vellum & Parchment - Produced from animal skin that had been soaked, limed, and scraped of hair, and then dried under tension on a wooden frame. The liming results in a pale white or cream color which distinguishes it from other book leathers.

Woodcut - One of the earliest forms of printed illustration in which an impression is taken from an inked form cut in a block of soft wood. The design of a woodcut is of bold black lines or areas depicting a design against a white background (relief) whereas that of wood engraving is the reverse (intaglio).