July 31 is an important day in the Wizarding world. Not only is it Harry Potter’s birthday—which, of course, before the age of 11 didn’t mean much of anything seeing as the Dursleys either forgot about it or knowingly ignored the day’s significance—but it’s also the day which Harry found out about his past, and with a single proclamation from Hagrid (“Harry—yer a wizard!”), his life was changed forever. If you ask the generation of readers who grew up alongside “the boy who lived”, they’ll tell you Harry’s story changed their lives, as well. 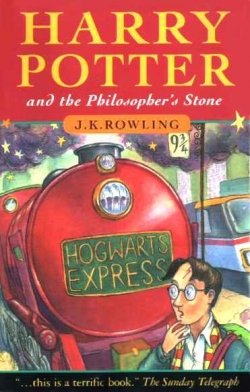 Not only were the stories of Harry, Ron, and Hermione and their adventures at Hogwarts a special brand—the type of tale that comes around once in a lifetime—but J.K. Rowling’s Harry Potter series was also published at arguably a most perfect moment in history. The value of the book as a physical object was at its peak—brick and mortar bookstores reigned supreme and e-readers had not yet gained popularity. Legions of Harry Potter fans thus congregated for “release parties” at local bookstores where they waited in their house colors and Potter-inspired spectacles for the clock to strike midnight so they could get their hands on the newest installment of Harry’s adventures. There was something euphoric about holding the book and physically paging through it, after the months and months of anticipation. At the risk of being clichéd, the Harry Potter books were (and are) magic.

The books, of course, are valuable collectibles, with first editions of Harry Potter and the Philosopher's Stone selling for several thousand dollars. In celebration of Harry’s birthday, we’ve rounded up some of our past posts honoring Harry Potter. Enjoy!

In Chapter Four of Harry Potter and the Philosopher’s Stone (known to many American readers as Harry Potter and the Sorcerer’s Stone), the gentle giant, Hagrid—keeper of keys and grounds at Hogwarts—presents Harry with a “large, sticky chocolate cake” for his eleventh birthday. Twenty years have passed since that first book in the Harry Potter series was published. We’ve all celebrated lots of birthdays since then. We’ve all grown—some of us “up” and some of us “old.” And in that time, the beloved character, Harry, has grown as well.

Readers watched him enter the scene as the boy who lived in “the cupboard under the stair” at “number four, Privet Drive.” By series end, he had come of age. And we were there every step of the way cheering him on. When Hagrid presents Harry with his birthday cake, it is the first time that his special day is recognized, and it marks a new birth as well. He is about to embark on his journey at Hogwarts. What is true for the fictional character is also true for the book and its place in our hearts and imaginations. It is the beginning of a magical journey. Read more >>

The Birth of the Harry Potter Phenomenon

Potter’s beginnings are not quite as humble as many a journalist would have you believe. As the books gained popularity, various news stories came out about the author: a single mother on welfare, scrawling her children’s novel on napkins and envelopes, suddenly shooting to literary stardom. Joanne Rowling was indeed struggling to make ends meet. She couldn’t afford daycare for her young daughter, so she chose to pursue writing instead. The character of Harry and the world of Hogwarts had been taking up space in her head for about five years at that point. Rowling would walk around Edinburgh with her daughter in a stroller, then zip into a café to write the moment the baby fell asleep. She sent a portion of her manuscript to literary agent Christopher Little (because she liked his name), who realized the story’s potential. Read more >>