The written word has a long history of conveying our greatest passions. And poetry, in particular, has often been the chosen vehicle to express such feelings as love, hate, disillusionment, and snark. Poetry has looked different in different times, but no matter its form, it never ceases to convey a striking snapshot of the world surrounding it. Perhaps it is poetry’s economy of letters—that which requires the great poetic masters to pack more punch in, typically, less space—that makes it such an enduring form. It does, after all, hold immense power. Today, we’d like to explore a particular moment in history—the eighteenth century—and the poets who populated it.

The early part of the eighteenth century saw the rise of Alexander Pope. In his work, and especially in one of his earliest works, An Essay on Criticism (1711), Pope is famous for using heroic couplets—two adjacent, rhyming lines of iambic pentameter—to great effect. The oft quoted, “To err is human, to forgive divine” comes from Pope’s Essay on Criticism. 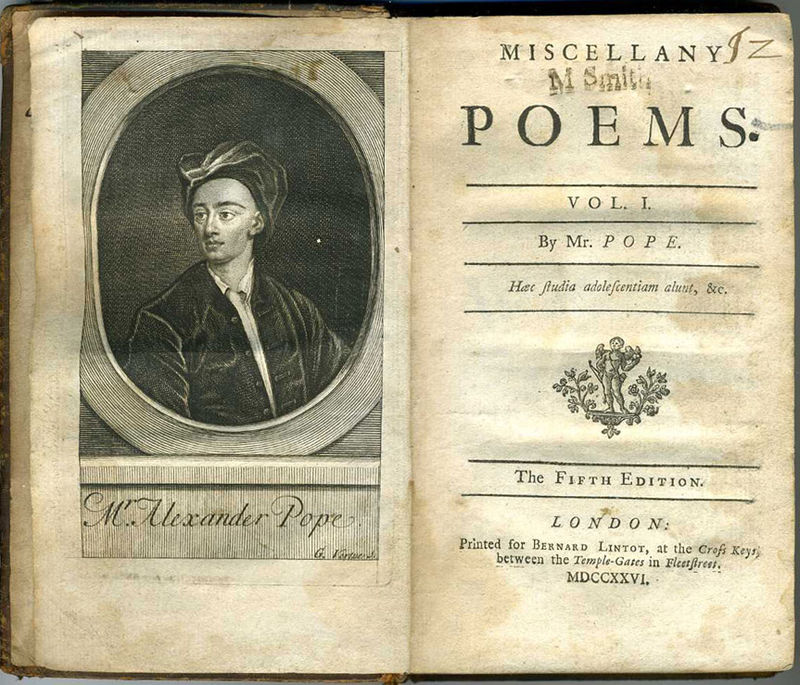 His most well-known effort, The Rape of the Lock, was published a year later in 1712. The Rape of the Lock is satire at its finest, and it has become one of the go-to examples of literary high burlesque. Pope used a heroic style in this narrative poem and in doing so, exploited the rather trifling nature of the event in question: the cutting of a lock of hair.

The first line of the poem and Pope’s citation of a “dire offence” is a perfect example of the caricature he sets up:

This, ev'n Belinda may vouchfafe to view:

Slight is the Subject, but not so the Praise,

If She inspire, and He approve my Lays.

Another early eighteenth century man of letters who bears notice is Samuel Johnson. Perhaps best known for the dictionary he compiled which, until the creation of the Oxford English Dictionary over a century later, was the most widely used English Dictionary, Johnson was also a poet. He translated Alexander Pope’s Messiah in 1728, and Johnson wrote his own poem London which was published in 1738 and detailed the author’s thoughts on the city. Pope praised Johnson’s efforts.

Other notable British poets who were contemporaries of Pope and Johnson include Jonathan Swift and Thomas Gray.

Phillis Wheatley is an important player in eighteenth century poetry, and for poetry and women’s literature in general. Born in West Africa, Wheatley was sold into slavery before she turned 10 years old. She was transported to North America and purchased by the Wheatley family in Boston. The family helped her learn to read and write after discerning her knack for it. They championed her poetic endeavors. Indeed, Wheatley was held up as the educated standard to which black slaves should aspire.

Her position as an enslaved woman who was paraded around by her masters was a point of contention for many abolitionists. Some criticized Wheatley for not taking a stronger stand against slavery. In one of her eulogy efforts, “On the Death of General Wooster”, Wheatley does seem to speak to the issue of slavery:

But how presumptuous shall we hope to find

Divine acceptance with the Almighty mind

While yet o deed ungenerous they disgrace

Let virtue reign and then accord our prayers

Be victory ours and generous freedom theirs.

And, many of her poems implored Christians to not forget the black population in their catechesis. On Being Brought from Africa to America is one of her most famous poems, and much of her canon includes poems with biblical imagery and patriotic sentiment.

Wheatley was set free shortly before Mrs. Wheatley died. She married John Peters, a free black man, in April 1778. Their life was a challenging one, with little money and few job prospects. Wheatley continued to write, but failed to find patrons to publish her work.

American Poetry in the 18th Century 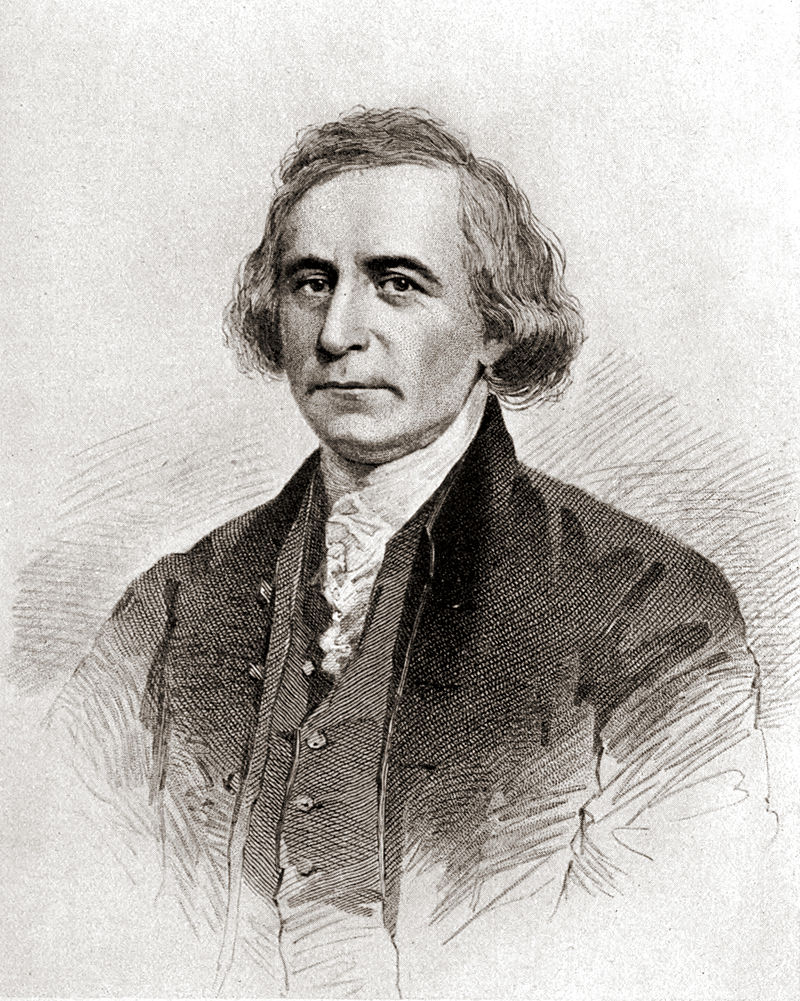 'History has its eyes on you', eighteenth century. Indeed, the eighteenth century saw the establishment of the colonies and their fight for freedom from Great Britain. And, speaking of Hamilton, one of the earliest recognized American poets actually spent much of his career butting heads with Federalist Hamilton. We’re talking about Philip Freneau. Freneau worked for Thomas Jefferson to propagate Nationalist causes through the newspaper he edited, The National Gazette.

Along with being an editor, Philip Freneau wrote patriotic poetry including The British Prison Ship (1780),  which detailed his experience as a prisoner of war. His words are cutting to this day:

THE various horrors of these hulks to tell,

These Prison Ships where pain and penance dwell,

Where death in tenfold vengeance holds his reign,

This be my task —ungenerous Britons, you

Conspire to murder whom you can’t subdue. —

When he wasn’t writing poetic anthems, Freneau turned his focus to nature. His poem, "The House of Night", is considered one of the first romantic poems to be published in America. And many of his efforts, including "The Wild Honey Suckle" (1786), set the stage for later, more well-known poets who spurred on the transcendentalist movement like Emerson and Thoreau.

Any discussion of eighteenth century poetry must mention the romantic poets. They did, after all, come into their own in the late-1700s, though arguably, the peak of their artistic output was the early- to mid-portion of the nineteenth century. 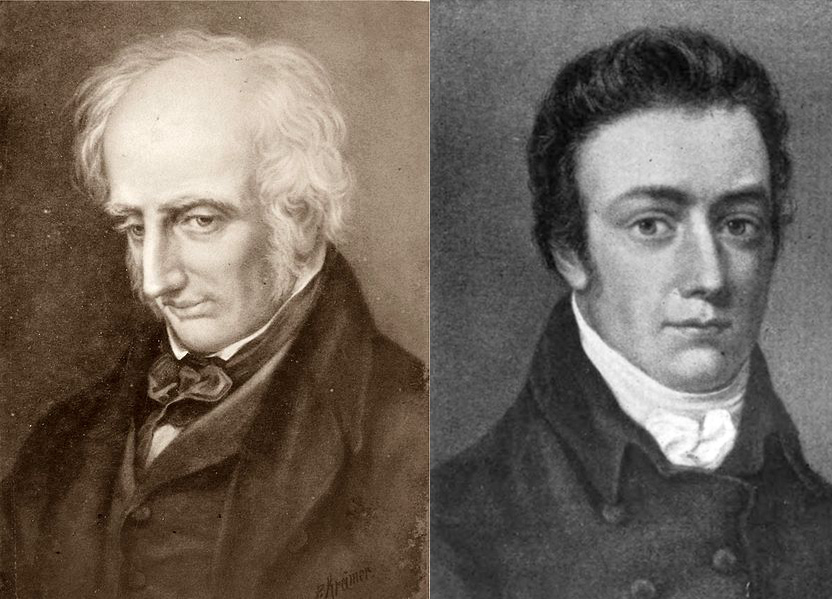 Who are the romantic poets? In English literature, the big four include Samuel Coleridge, William Wordsworth, and later Lord Byron and John Keats. They focused on emotion and the individual in their poetry, taking care to allow for any overflow of feelings to drive their efforts. Though not necessarily a key tenant of the romantic poetry movement, nature and the natural world often take center stage in many of their poems.

Perhaps most important to the Romantic poets was originality. Any modeling of one’s work on that of another, rather than allowing it to develop spontaneously out of one’s own ‘genius’, was considered distasteful as it hindered one's own important, individual imagination.

Samuel Coleridge and William Wordsworth jump-started the Romantic Age when the jointly published Lyrical Ballads in 1798. Included in this collection is Wordsworth’s Lines Written a Few Miles above Tintern Abbey and Coleridge’s famous The Rime of the Ancient Mariner. These poems, and the entire Lyrical Ballads collection, are a great starting place for those looking to dive in to the Romantic movement and move a discussion of poetry from the eighteenth to the nineteenth century. We'll leave you with an excerpt from Tintern Abbey:

Five years have past; five summers, with the length

Of five long winters! and again I hear

These waters, rolling from their mountain-springs

With a soft inland murmur.—Once again

Do I behold these steep and lofty cliffs,

That on a wild secluded scene impress

The landscape with the quiet of the sky…