Short story writer and novelist Alice Adams was born in 1926 in Virginia. She studied at Radcliffe College during which she also attended writing classes at Harvard University. She worked clerical positions in medical offices for many years and throughout her marriage. Toward the end of her marriage, a therapist suggested she quit writing and continue with her marriage. Adams applied the exact opposite advise and to great success. Throughout her career, she published numerous novels and short stories, twenty-five of which were originally published the prestigious magazine, The New Yorker. Though Adams' novels were never particularly critically acclaimed, she absolutely shone the short story form. She is one of only four authors to be granted the O. Henry Special Award for Continued Achievement, along with such other masters of the form as Alice Munro, John Updike, and Joyce Carol Oates. Consider starting your own collection of works from this amazing writer, who passed away in 1999 at the age of seventy-two.

Beautiful Girl
Adams' first collection, Beautiful Girl, was published in 1979. Among the sixteen contained in the book is “Winter Rain,” the first short story Adams ever sold, published originally in Charm magazine. Several others were originally published in The New Yorker, including the titular story “Beautiful Girl,” which focuses on a former, faded beauty queen who spends much of a her days in an alcohol-induced fog. The connecting theme between each of the stories, as is often the case in Adams' work, is love and the ways it can fail us. The theme is seen again in “Roses, Rhododendron,” a story which her biographer Carol Sklenicka says was inspired by the tense relationship between her own parents. 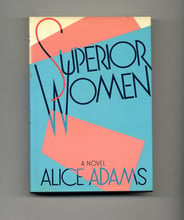 Superior Women
Adams' 1984 novel Superior Women focuses on a group of five women who meet and become friends their freshman year at Radcliffe and follows them through four decades of friendship, during some of which they go from friends to enemies and back again. The novel received mixed and middling reviews, with many drawing comparisons to Mary McCarthy's The Group. It's worth checking as it is considered the most commercial of all of her novels.

Alice Adams: Portrait of a Writer
Adams did pen her own autobiography, but those interested in learning more about her personal life need look no further than Alice Adams: Portrait of a Writer by Carol Sklenicka. Known for her gripping portrayal of famed writer Raymond Carver in Raymond Carver: A Writer's Life. She approaches Adams with the same deft hand, reconstructing her life though documents and letters, drawing interesting parallels between the life of the writer and the subject matter she so often chose to portray, like love affairs ending in disappointment and the ways in which our families can contribute to or even cause our unhappiness.