An Economist for the People: John Kenneth Galbraith

John Kenneth “Ken” Galbraith was one of the most well-known economists and diplomats of the 20th century. Born in Ontario, Galbraith received his masters and doctorates in agricultural economics from University of California Berkeley. He went on to teach at both Harvard and Princeton University, and he held fellowships at the University of Cambridge in England. Galbraith published widely and became well known for his positions as a diplomat and as the editor of Fortune magazine during World War II. His role was exceedingly important at a time when understanding the politics and economy of agriculture was necessary for a nation at war and a people who had not yet recovered from the harsh impact of the Great Depression. 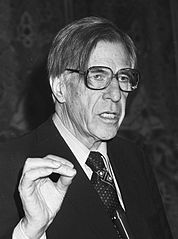 Galbraith certainly put in his time. He worked as deputy head of the Office of Price Administration helping stabilize prices and the cost of rent against those who would take advantage of a wartime situation and drastically raise costs for the American people. At Fortune, he took it as his mission to educate people on the nature of economics, big business, and a post-war economy.

After the war, he worked for the State Department where he oversaw the economic affairs pertaining to countries like Germany, Austria, and Japan. He also worked with Eleanor Roosevelt to help establish the ADA, or Americans for Democratic Action. He served as an adviser to President John F. Kennedy, United States Ambassador to India, and was named the Humanist of the Year in 1985 by the American Humanist Association. In 2000 he was awarded the U.S. Presidential Medal of Freedom. He died in 2006 of natural causes at the age of ninety-seven.

Ken Galbraith's work took the complicated study of American agricultural economics and made it understandable to a public filled with unease after the financial struggles of the Great Depression and the economic insecurity that comes from being a nation at war. Here are some must-have books from his career-spanning bestselling works:

The Affluent Society, published by Houghton Mifflin in 1958, is focused around the idea that in a post-World War II United States, there exists a large economic disparity between the wealthy and the lower class. In this structure, the rich became richer due to economic booms, but those financial benefits seen by the upper class were not being felt at all by the lower class. He posed that this disparity was being perpetuated by the constantly increasing wealth of the private class that did not benefit any kind of infrastructure to also help raise up the poorer public sector.

He argued in favor of educating the people as they might become the greatest economic asset in the future. The ideas in this book remain relevant today. Reports of a constantly shrinking middle class and the concerns about wealth distribution in the United States are ever-present, making this book a perfect addition to the collections of those interested in non-fiction or economics. In this book, Galbraith also coined the popular phrase “conventional wisdom.”

A Life in Our Times

Galbraith's memoir, A Life in Our Times, details his childhood in Canada, his academic history, his career as a public servant, and his involvement in politics. The book offers a humorous look at what it's like to be so prolific an author writing on incendiary and polarizing topics. A best-seller when it was released in the 1981, this is a can't-miss book for those interested in the man behind the some of the most popular books written about American economics.

The Culture of Contentment 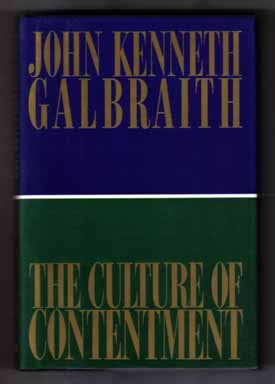 This book-length essay published in 1992 expands on some of the ideas detailed in The Affluent Society, particularly the idea that the wealthy are content to amass further wealth and selfish political gain while ignoring the plight of the less wealthy, who are increasingly moored in poverty.

This book was published by Houghton Mifflin with the paperback released by Mariner Books and is widely considered to be a masterful prediction of a future shaped by Reagan-era politics into something that consistently rewards the rich while systemically punishing the poor for being poor and refusing them opportunities for political power.

The Economics of Innocent Fraud

Released in 2004 by long-time publisher Houghton Mifflin, this 64-page essay is Galbraith's final published work. The book explores Galbraith's views on various “frauds” throughout the American economic system, which he saw as having become a tool of the wealthy private sector to propagate wealth and leave the lower class in poverty. Some of the common frauds in American economics he details are the tendency to promise a positive future in business though layoffs are imminent, the transformation of the American promise of capitalism as a system in which anyone can get ahead into a system that benefits only corporations, the fusion of the private sector with the government so that they are mostly indistinguishable, and the misrepresentation that the Federal Reserve has any power over preventing inflation or negative economic effects on the public sector.