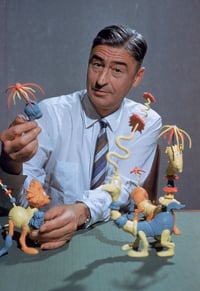 Geisel took the name "Seuss" from his mother’s side of the family. Still, the story behind the moniker goes much deeper than that. While a student at Dartmouth during Prohibition, he was caught drinking gin one night with his fellow students. Being caught with contraband was a major offense at the time.

Geisel was not expelled, but he was forced to resign from extracurriculars, including his post as editor-in-chief of the Jack-O-Lantern. Not willing to quit, Theodor Geisel found a clever way to stay involved.  Read more.

Dr. Seuss was notoriously tight-lipped about his inspirations. His early years provide some clues; Dr. Seuss credits his mother with his sense of rhythm, and his father with teaching him how to draw.

But what about Dr. Seuss' literary influences? Was Yertle the Turtle a nod to Lord Byron? Did studying alongside Salvador Dalí impact Dr. Seuss's illustrations? Read more.

When Dr. Seuss Went to War 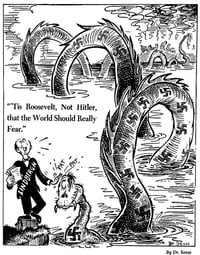 Before he wrote the bulk of the books that would make him a giant of children’s literature, Theodor Seuss Geisel took a stand. Fascism had spread across Europe, and the Third Reich was bringing war and slaughter to its neighbors and citizens.

Congress and the press debated what role America should play in the growing conflict, but Geisel was sure of what had to be done. Nazism, he knew, had to be fought. Read more. 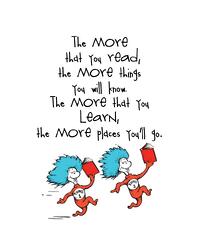 Today, Dr. Seuss remains one of the most popular children's writers of all time. Beloved for their whimsical drawings, fanciful rhymes, and important themes, his books are still in print  and are found in libraries and classrooms across the world.

Here are some of our favorite quotes that exemplify the humor and heart of Dr. Seuss. Read more.

Book Spotlight: The Cat in the Hat

In 1957, an article published in Life magazine, “Why Do Students Bog Down on First R? A Local Committee Sheds Light on a National Problem: Reading,” questioned the effectiveness of school primers in teaching and encouraging children to read. Director of Houghton Mifflin’s education division, William Spaulding, challenged his friend Geisel to create a book that would keep children’s interest. Geisel wrote The Cat in the Hat, the first of the Beginner Books series, effectively changing the way children learn to read. Read more.