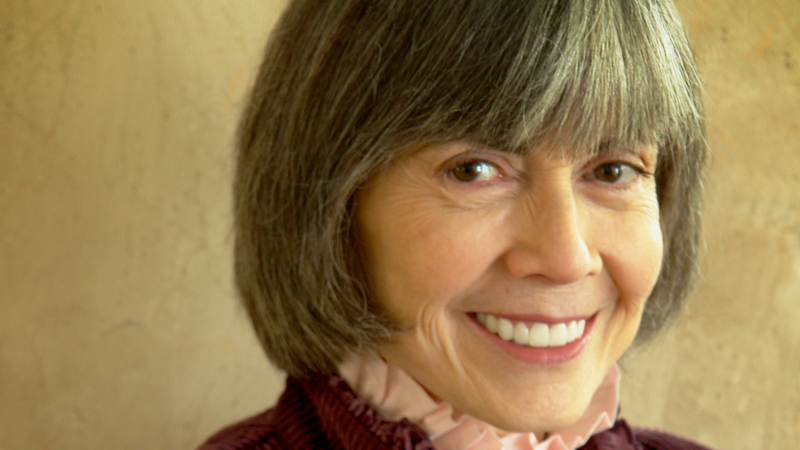 She is one of the most popular authors of the last fifty years, exceeding $100 million in book sales and continuing to produce an average of one novel per year. Rice returned to her hometown of New Orleans and has an active social and travel life as well as a successful son who is also a writer. Having survived the death of a child, the loss of her husband of 41 years, and two near-death experiences of her own, Rice is thriving and happy in the city where her characters dwell.

She was born in New Orleans in 1941 to a poor Roman Catholic family. Her father, a WWII veteran, worked for the US Postal Service and her mother, a staunch feminist and admitted alcoholic, worked as a cleaning person. Rice's mother died of alcoholism when she was 15 and the family moved to Texas the following year. There she met her husband, Stan, who she married at 20. The two relocated to San Francisco and started a family, but were devastated to lose their daughter to leukemia in 1972. Rice's time of grieving was challenging and tumultuous, including a bout with Obsessive Compulsive Disorder and the decision to stop drinking, but ultimately this period ended in the publication of her most popular novel to date, Interview with a Vampire, and the birth of her son Christopher when she was 37. Between 1973 and 1988, Rice wrote three more novels of The Vampire Chronicles as well as two historic fiction novels and five erotic novels.  The Claiming of Sleeping Beauty and Exit to Eden were well received works written under the pseudonyms A.N. Roquelaure and Anne Rampling.

In 1998, Rice suffered a coma associated with Type 1 Diabetes and returned to the Roman Catholic faith after being an outspoken atheist for nearly four decades. Four years later, her husband died of brain cancer, and two years after that she nearly died for the second time due to complications from gastric bypass surgery. Rice left New Orleans and never wrote another vampire novel. Instead, she shifted her focus to Christian novels, penning her second most popular work, Christ the Lord: Out of Egypt as well as a spiritual memoir, Called Out of Darkness. Rice has been open to public interviews and maintained her own website for most of her adult life; the conversation about religion is no exception. In 2010, she posted on her own Facebook page that while she remains connected to God, she has formally denounced Christianity as an organized religion and now identifies as a secular humanist.

In addition to her Facebook page, Anne Rice is active on Twitter and regularly reviews books on Amazon. She personally maintains her own website and shares pictures of her worldwide book signings. Rice uses her website as a way to communicate with her fan base and to express thoughts on social and religious issues. Ever eloquent and rarely unoriginal, Anne Rice remains a woman of our time.  She published Blood Communion: A Tale of Prince Lestat, the thirteenth installment in the Vampire Chronicles series, just last year.

Here's a look at the best of Anne Rice from around the web.

Happy Birthday, Anne Rice!: A quick biography of the author, from our blog

The Divine Mrs. R: A delightful interview with Tony Buchsbaum of January Magazine

Anne Rice weighs in on Twilight in this article from The Guardian.

Rice did much to popularize vampires, and these mythical creatures have enjoyed much more attention in recent years. She weighs in on Stephanie Meyer's wildly successful Twilight series and the hit television program 'True Blood.'

Though Rice was raised in a Roman Catholic household, she later renounced organized religion. Her relationship with Christianity is a complicated one, and it's evolved over the years. In this interview, she elucidates her attitude toward Christianity.