Arna Bontemps may not be as well known as his fellow Harlem Renaissance luminaries like Langston Hughes, Zora Neale Hurston, or Jean Toomer, but that does not diminish his contributions. His novel, God Sends Sunday, about a jockey who wins and prodigally spends his money, repulsed W.E.B. DuBois, who called it “sordid,” but it remains a quintessential novel of the movement. Bontemps’s further work spans not only poetry and novels, but children’s books, history, anthologies, biography, and, until his retirement, success as an archivist and librarian at Fisk University. His life was a mission engaged all at once in the efforts of resurrection, preservation, and creation. 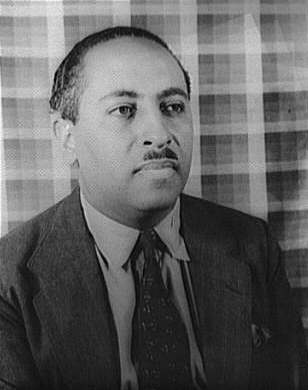 Arnaud Wendell Bontemps was born in Alexandria, Louisiana, in 1902. He was born to Southern Creole heritage. His mother died when he was only an infant, and his father, a successful bricklayer, moved the family from Louisiana to Los Angeles in response to too many brushes with the area’s racism.

Though Bontemps’s father had artistic leanings of his own (he was a trombonist in Claiborne Williams’s jazz band), he frowned upon his son’s reading habits. He believed his son should employ himself in a practical trade like his own, rather than be distracted by novels like Treasure Island and all manners of African-American literature.

To appease his father, Arna Bontemps enrolled in Pacific Union College as a pre-med major. But it wasn’t long before the young man changed his concentration to English, meeting fellow writers and ambitious peers who suggested that Bontemps make the move to Harlem where black artists thrived. Things were looking good: right before he arrived in New York, the 24-year-old’s first poem, “Hope,” was published in Crisis, the NAACP’s African-American magazine founded in part by W.E.B. DuBois.

There, he met Langston Hughes and befriended other writers of the renaissance, including Countee Cullen and Cane author Jean Toomer. They attended the Black Tower salon, hosted by A’Lelia Waker, heir to the Madam C.J. Walker hair-care fortune, where they discussed politics, art, and gossip. Langston Hughes would become Bontemps’s greatest friend, and the pair would exchange over 2,000 letters of correspondence over their 40-year friendship.

Bontemps never managed to make literature work for him as a full-time career. His novels supplemented his poetic output—magazines like Crisis and Opportunity paid him $5 to $8 per piece—but the proceeds still fell short. In Harlem, he worked as a teacher, where he met as a student Alberta Johnson, whom he would later marry. The couple had six children together.

After Bontemps wrote God Sends Sunday in 1931, he returned to his Southern roots, relocating the family to Alabama where he found a new teaching position. Around the same time of the move, Bontemps and Langston Hughes’s collaborative children’s book, Popo and Fifina, concerning Haiti, was published. The book led the New York Times to declare that all children’s books “should be written by poets.” The pair would work on other children’s stories, including The Pasteboard Bandit and The Sad-Faced Boy. Bontemps’s own career as a children’s author would culminate with the publication of Story of the Negro, an illustrated history book that won a Newbery Honor award in 1949.

Arna Bontemps and his family relocated once again, this time to the city of Chicago, where the author befriended author Richard Wright and other writers of Chicago’s Black Renaissance. Bontemps’s 1936 novel Black Thunder, about the slave rebellion of Gabriel Prosser, was well-received by critics, and the author studied at the University of Chicago to acquire a masters in library science. It would lead him to an eventual position as head of the library at Fisk University in Tennessee, where he would establish an archive collecting the writings and papers of African-American writers, many of whom he counted as his dear friends.