On June 3, 1936, Larry McMurtry was born in Archer City, Texas. Famous for his novels about the American West, McMurtry has had a rich career as a writer--and as a bookseller. Though he's since retired from both careers, McMurtry has made an indelible mark on the book collecting world.

From Cattle Herding to Book Herding

McMurtry grew up on a farm outside Archer City, where both his grandfather and father were cattle ranchers. But McMurtry had no intention of following in his family's footsteps. Books were difficult to come by in Archer City, and McMurtry was always a reader. It was on a trip to Ft. Worth for a school track meet, at Barbara's Bookstore, that McMurtry discovered his first Horace Walpole novel. A few years later, McMurtry left Archer City to attend the University of North Texas. He vowed that if he ever returned to the town of his childhood, he'd bring a copy of every book he'd ever need.

McMurtry earned a BA from UNT and went on to get an MA at Rice University. In 1960, he was a Wallace Stegner Fellow at Stanford University. He studied under novelist Wallace Stegner along with fellow up and coming novelists Ken Kesey, Peter S Beagle, Robert Stone, and Gordon Lish. Meanwhile, McMurtry also worked as a rare-books scout, a position that enlivened and deepened his love for books. When he returned to Houston, he took a job managing another bookstore. Soon, McMurtry could not imagine a life that didn't include running a bookstore.

Though McMurtry had left the ranch, he still saw his family's legacy in his bookish calling: "The tradition I was born into was essentially nomadic, a herdsmen tradition, following animals across the earth. The bookshops are a form of ranching. Instead of herding cattle, I herd books. Writing is a form of herding, too. I herd words into little paragraph-like clusters."

When McMurtry moved to Washington, DC in 1969, he opened up Booked Up with two other partners. In 1988 he decided to open another Booked Up--this time back in his hometown. "You go out into the world, and then bring what you want of the world back home with you," he said. And what he wanted was to turn Archer City into the Hay-on-Wye of the United States. To that end, McMurtry purchased the stock of over 20 bookstores, amassing approximately 450,000 books. Meanwhile McMurtry moved into a 1920's oilman's mansion and built a personal library of about 16,000 volumes. His own interests include comic books, first editions, and literary fiction.

McMurtry's life is so intimately entwined with the written word that he called his 2008 memoir Books. In it he meditates on the vocation of bookselling, asking "If you don't enjoy the physical act of handling books, why be an antiquarian bookseller at all?....The pleasure of a hands-on approach to bookselling is both intellectual and tactile. The best bookmen rarely lose or exhaust their curiosity about editions, variants, points, bindings, provenance, cost codes, and the like."

Booked Up enjoyed a steady stream of visitors from near and far, but in 2005 McMurtry considered shutting the shop down. He cited the economic pressures and difficulties presented by the internet. After receiving a flood of support, he changed his mind. But in 2012, it was time to move on. McMurtry hosted one of the largest book auctions in modern history, selling off over 300,000 volumes.

An Illustrious Career as an Author

All the while that McMurtry was selling books, he was also writing them. He's won the Jesse H Jones Award three times: in 1962 for Horseman, Pass By; in 1967 for The Last Picture Show; and in 1986 for Lonesome Dove. He also won the Amon G Carter Award for periodical prose with Texas: Good Times Gone or Here Again?. He's perhaps best known for Terms of Endearment (1975) and the Pulitzer Prize-winning Lonesome Dove.

McMurtry never set out to be a writer of American Westerns. Indeed, only seven of his 23 novels are about the Old West. Yet he's always acknowledged that the rural Texas of his upbringing consistently reasserts itself as he writes. "It's still such a strong landscape for me," he's admitted in interviews, "I can't escape it in my fiction. I can work away from it, but I always start here."

McMurtry also always spoke out against the typical Western novels, which he found both unrealistic and overly romanticized. In Lonesome Dove, he truly believed that he'd written the "anti-Western." Yet the epic tale is often hailed as the greatest Western novel of all times. McMurtry asserts that people misread the novel, and he responded with Streets of Laredo, which was much darker. He maintained the brooding tone with Comanche Moon, which tells the story of the same characters 20 years earlier.

Toward the end of his career, McMurtry was ready to explore a different subject--or give up writing altogether. "I'm bored to death with the 19th-century West. I wrote more about it than I ever intended to," he said. McMurtry pointed out that most writers don't improve as they age; they enjoy about twenty productive years and begin to decline around age 50. Though McMurtry may have steered away from novels, he has written screenplays, most notably Brokeback Mountain, which he co-wrote with Diana Ossana. The pair won both a Golden Globe and an Academy Award for their work. McMurtry used his Academy Award acceptance speech to remind everyone that credit for the plot belonged to E. Annie Proulx, who wrote the short story upon which the movie was based. 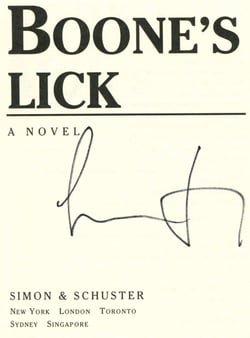 American Westerns are quite a popular specialization among rare book collectors, and Larry McMurtry is certainly a titan of the genre. It's possible to built an incredibly rich collection around McMurtry's work. In addition to his novels, McMurtry has also written biographies, essays, and memoirs. Most of his books were published by Simon & Schuster, so collectors will want to learn how to identify Simon & Schuster first editions.

Other interesting items include association copies. Larry McMurtry uses a simple but distinctive bookplate that features the brand his father and grandfather used on the family's cattle. You should also look for inscribed books, which add a personal touch to a collection. And because numerous works by McMurtry have been adapted for both movies and television, some collectors focus on these screenplays and scripts.