Published on August 17, 2019, Animal Farm was George Orwell’s first bestseller and helped cement his place among timeless authors. Born June 25, 1903, as Eric Arthur Blair, Orwell spent much of his career after his experiences during the Spanish Civil War speaking against totalitarian governments. His works, from Animal Farm to Nineteen Eighty-Four, are still influential and widely studied nearly 70 years after his death.

Set at Manor Farm in East Sussex, England, Animal Farm follows the animals under the owner of the farm’s care as they rebel against their poor treatment and take over the farm for themselves. Two pigs, Snowball and Napoleon, seize control of the farm and adopt the Seven Commandments of Animalism, placing special emphasis on the commandment that “All animals are equal.” Things start out well. There is plenty of food and the animals learn how to read, but the pigs are not satisfied. They place themselves in positions of power over the other animals and start keeping food for themselves. Eventually, Napoleon drives Snowball away, keeping all of the power for himself and officially doing away with the public meetings and instituting a committee of pigs. As time passes, the pigs become more like humans exploiting the other animals, leaving them without the improvements promised during the revolution and in the same situation as they were in under Mr. Jones.

When writing Animal Farm, Orwell found inspiration in many sources. As a lover of the country and farm life, his use of animals and a familiar setting in the novel was inspired by his writing environment. A second inspiration is animal fables. Belonging to the same tradition as Rudyard Kipling’s The Jungle Book and Aesop, Orwell’s work is tailored for more mature audiences, focusing on sociopolitical ideas and satire.

Throughout the novel, Orwell satirizes the Russian Revolution of 1917 and the corruption that set in immediately after. Mr. Jones represented the Czar and his rule while the pigs represent the leaders of the Revolution who caved to the siren call of power by instituting a totalitarian state. From canine police as the secret police to thought control, Orwell represents problematic aspects of the Soviet government. Despite not being Orwell’s intention, Animal Farm grew beyond its original purpose of being a moral fable, instead becoming an anti-communist weapon during the cold war

Seven Books We All Read in School

Books and school go hand-in-hand. Whether they were on summer reading lists, sprinkled throughout the general curriculum, or assigned for a book report, the following books represent some of the most common novels we all read in school. Check out some of these classic novels and relive your school days.

The Adventures of Huckleberry Finn

This Mark Twain classic was published in the United States in 1884. While it is a curriculum staple at many schools, it is also one of the most banned and challenged books of all time. The Adventures of Huckleberry Finn is notable for being the first American novel to be written in vernacular English. For this reason, it is so frequently banned: the novel frequently uses racial slurs as the characters themselves would have done. The novel is also one of the first books to ever depict small town life, and it presents an interesting satire of the antebellum south. It's considered by many to be the first of what has since become known as "Great American Novels". It has been adapted numerous times for stage and screen. 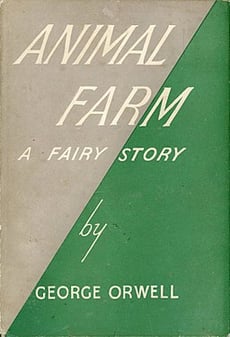 Animal Farm by British author George Orwell was published in 1945. It is a tale of barnyard animals who rise up and take control of their farm from their human oppressors only to end up being oppressed by the pigs who were once their friends and equals. Orwell's depiction of the animal's revolution, dogma, and propaganda serves as an allegory for Stalin's Russia.

Orwell initially struggled to find a publisher for the novel due to the United Kingdom being allied with the Soviet Union at the time. The book did not really gain widespread popularity until the Cold War. Since then, it is considered one of the most important novels of western literature and was given a retrospective Hugo Award.

Nobel Prize winning author William Golding's 1954 novel is a masterful allegory about the degradation of society. Focusing on two groups of children marooned on a deserted island, it follows the groups as they establish a society in miniature in hopes of surviving and eventually being rescued. The story of how the groups end up warring against one another and eventually crumble into violence and ultimately murder was not immediately a hit upon publication and was out of print for a time. However, it has since gained more of a following and has been widely translated across the world. Time magazine named it one of the best English language novels. It has been adapted several times into film, with the most famous perhaps being the 1990 version starring Balthazar Getty, in spite of the adaptation differing quite a bit from the novel.