Book Spotlight: The Girl Who Drank the Moon

The Newbery Award-winning novel The Girl Who Drank the Moon by Kelly Barnhill was published in 2016 by Algonquin Young Readers. This middle grade novel appeals to both young and old readers with it's important message and compelling fairy tale feel. The Girl Who Drank the Moon is a magical story that's perfect for lovers of magic, fairy tales, and for Newbery collectors. What is it about this book that captures the imagination and has lead to it's massive success and popularity? 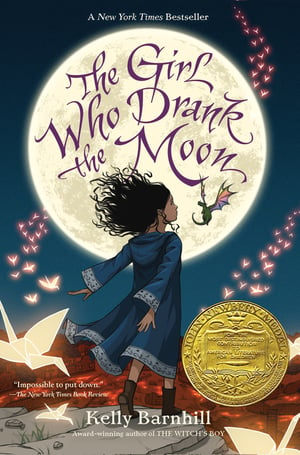 The Girl Who Drank the Moon tells the story of the Protectorate, also knows as the City of Sorrows. It was founded many years before the events of the story as a reported safe haven for refugees fleeing the devastation of a volcano. But the city is not as safe as it seems. It's run by the Council of the Elders and the Sisters of the Star who live in a massive tower containing a wealth of knowledge they refuse to share with the people of the city. To stoke the people's fear and loyalty, the council and the sisters, led by Sister Ignatia, spread a story of an evil witch who lives in the forest and bog beyond the city who can only be appeased if every year, the city abandons a newborn in the forest as a sacrifice. The witch is entirely fictional but unbeknownst to them, the forest is actually home to a good witch name Xan who finds the abandoned babies and carries them to safer and happier cities to be raised by loving parents, feeding them starlight as they go.

One particular baby is so enchanting to Xan that she gets distracted and accidentally feeds her moonlight instead of starlight, imbuing her with magical powers. She decides to raise the girl, Luna, herself. Luna's magic comes to fruition on her thirteenth birthday when she goes to rescue an injured Xan who took the shape of a bird to hunt for that year's abandoned baby and was shot by Antain, nephew of the Council head. Antain was supposed to take his uncle's place on the Council, but when he had witnessed the corruption, he turned to carpentry instead.

Antain was not willing to abandon his own child who had been selected that year, and he had taken to the forest to defeat the evil witch. When he shoots Xan in bird form, he does his best to save her but Luna and Sister Ignatia, come upon him in the forest. It is revealed that Sister Ignatia actually founded the city herself five hundred years before with plans to feed off the sorrow of the citizens.

Luna, Xan, and the Antain defeat Sister Ignatia by refusing to feed her sorrow. Luna uses her magic to save the city from the volcano's latest eruption. She goes to live with Antain and his family, as well as her mother, who it turns out had been imprisoned and driven mad after her refusal to abandon her baby. Xan having weakened as Luna's power grew, dies, and is then escorted by her friend, a beast of the forest, to the bog beyond the forest where the people of the world believe all life originated.

The novel is fanciful and remarkable. The story explores themes of standing up against those who would decide what is best for us without having our best interest at heart and the love that can be found in the families we build for ourselves. The Girl Who Drank the Moon successfully presents a fairy tale that serves not only to entertain, but to also educate children on corruption, selfishness, and oppression as well as the importance of banding together and striving to do what is right in trying circumstances. Luna, as well as the reader, learns the necessity of finding strength within ones self.

Minneapolis, Minnesota-based writer Kelly Barnhill published her first book, The Mostly True Story of Jack, in 2011. Since then she has released three more novels: Iron Hearted Violet (2012), The Witch's Boy (2014), and The Girl Who Drank the Moon (2016). She has also published numerous short stories in magazines like Clarksworld and Fantasy as well as the novella The Unlicensed Magician.

Besides fiction, she has published essays and nonfiction works for children including Monsters of the Deep, The Bloody Book of Blood, and Sewers and the Rats that Love Them.

Barnhill studied creative writing in college, though she worked as a bartender, activist, teacher, and park ranger before she became a full-time writer. The Girl Who Drank the Moon earned her the Newbery Medal in 2017. The book has been a finalist for the PEN/USA prize and the Andre Norton Award and is a recipient of the Parents Choice Gold Award and the World Fantasy Award.

The Girl Who Drank the Moon was an immediate success. Besides winning the prestigious Newbery Award for being “the most distinguished contribution to American literature for children” in 2017, it also won the Texas Bluebonnet Award from the Texas Library Association.

The book spent forty-five weeks on the New York Times Best Sellers list. It has been widely reviewed in magazines, websites, and on YouTube. The book has garnered much praise from parents and professionals alike who agree that the book's message of inner strength and speaking out against oppression is a necessary one for the world's youth to hear. The Girl Who Drank the Moon was an Amazon Top 20 Best Book of 2016 as well as a New York Public Library Best Book of 2016. If you are building a Newbery collection, be sure to add this title to your library.