How often does a wine merchant become a bestselling author and thwart one of world history's most notorious villains? Such was the unlikely career of Dennis Wheatley, the author who dazzled readers with thrilling tales of intrigue. He would later use those same magnificent storytelling skills to weave a plot even Hitler couldn't ignore. 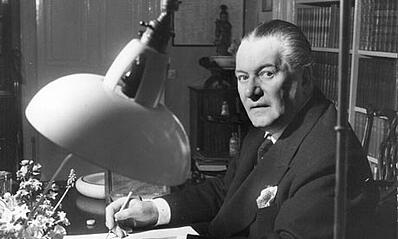 Englishman Dennis Wheatley was born on January 8, 1897 to a family of wine merchants. From 1908 to 1912, he worked as a cadet on the HMS Worcester, and a year later, he spent time abroad learning about wine making. At the age of 17, in 1914, he was sent to Cambrai, St. Quentin and Passchendaele to fight in World War I.

During the war, Wheatley suffered from pneumonia and bronchitis, which left his lungs weak. After a gas attack in May of 1918, he was sent home an invalid. By the time Wheatly had recovered, the war was over and he returned to his family’s wine business which he took over after his father’s passing. The business took a sharp turn for the worse with the failing economy and he was forced to sell it. With encouragement from his wife, he set out to begin his first murder mystery novel. His novels continued to gain popularity and by the end of the 1930's, he was a best-selling author.

His bestselling series told the story of Gregory Sallust, a master of disguise, equipped with endless knowledge—he was well versed in military science, spoke fluent German, and was endlessly charming. He was the James Bond of his time, wooing women and singlehandedly defeating the Germans. Wheatley's works would certainly influence Ian Fleming, who drew upon the character of Sallust when he created 007.

In May, 1940, Wheatley was commissioned to write ‘War Papers’ on strategic aspects of war, and by December of 1941, he was re-commissioned. He was the only civilian recruited to Winston Churchill’s Joint Planning Staff. World War II was underway, Wheatley's job was to deceive Hitler. He was commanded to devise a plan and a cover story believable enough to distract Axis forces.

Wheatley's first master plan was to get the Germans to believe that Britain was invading Norway. He leaked messages stating that Scottish troops were to be given Arctic clothing, Norwegian translators and maps, and briefed on mountain warfare techniques. His plan was successful: Hitler sent an extra 50,000 troops to Norway to fight an imaginary battle.

Despite all of Wheatley’s astounding contributions to the war effort, his greatest feat was Operation Bodyguard. His task: make Hitler believe that the attack on the beaches of Normandy was a cover up, while the Allied Powers were really going to send a million men to attack on Pas de Calais. Needless to say, Wheatley yet again succeeded. His narrative was so convincing that Axis troops remained in Pas de Calais weeks after D-Day, waiting for this invasion.

World War II was unarguably won by the Allied powers due to the amount of intelligence they gained through double-agents and the cracking of the German Enigma Ciphers. With the interception of communication, Wheatley was able to feed the lies Hitler already believed to be true. Much like he did in his novels, Wheatley tantalized his audience with pieces of information and led them to draw their own conclusions with the provided ideals.

Although his book sales rocketed at the time of publication, Wheatley’s novels are widely unnoticed today. Regardless of his absence on the bestseller list, the stories he wrote in Churchill’s bunker will live on forever.

The First James Bond?! John Dee Was the Original 007!

Muriel Wright: The Inspiration for the James Bond Girls

Heinrich Boll and the Literature of Rubble