You might think you’ve never heard of Charles Perrault, a French aristocrat who lived 1628 to 1703, but you definitely know his work.  A little volume written for his children and published near the end of his life has dwarfed his other contributions to history and made him famous under another name: Mother Goose. 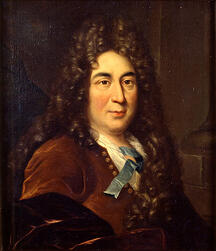 Before he published Histoires ou Contes du Temps passé: Les Contes de ma Mère l’Oye (in English, Tales and Stories of the Past with Morals: Tales of Mother Goose), Perrault served for many years as the secretary for the newly-created Academy of Inscriptions and Belles-Lettres under King Louis XIV.  He moved in sophisticated circles where storytelling had become a popular pastime. Perrault also wrote some light poetry and verse in the first half of his life which saw modest success.

In 1671, he was elected to the Académie française, the ruling body in charge of the French language.  It is unclear whether or not Perrault began the debate, but soon after his election, the Académie was embroiled in the Quarrel of the Ancients and the Moderns.  The Ancients saw the literature of the ancient Greeks as superior to all others; the Moderns believed that contemporary literature was better because of the natural progression of civilization.  Perrault was on the side of the Moderns, and he wrote a poem hailing the glorified rule of Louis XIV as proof of divine blessing on the current era.  One could almost see this as a bridge between the fading period of the Renaissance and the oncoming era of Enlightenment. 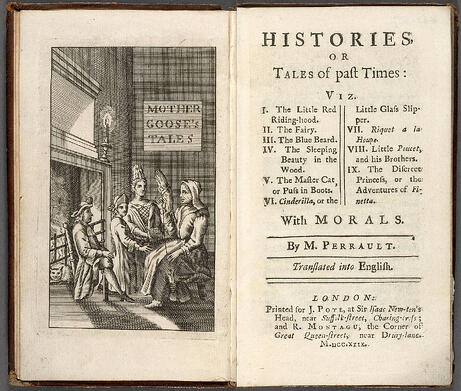 Perrault was unfortunately forced into early retirement by court politics. He tried his hand at writing epic poetry with a Christian subject (St. Paulinus of Nola) but met with mockery. Then, in 1697, at 69 years old, Perrault published his Tales of Mother Goose with eight short stories including Little Red Riding Hood, Sleeping Beauty, Cinderella, and Bluebeard.  Most historians believe that Perrault’s fairy tales (a very new genre at the time) were not completely original, but adaptations of existing folk tales.  However, there has been no evidence of Little Red Riding Hood ever being written previous to Perrault, so it is possible that some were his unique creation.

Strangely, Perrault chose to publish his fairy tales under his son’s name, Pierre, rather than his own. This could have been to give Pierre a leg up in the court or maybe to allow the book to find success apart from his reputation as a Modernist. Perrault’s intended audience is also an area of speculation.  Was he writing for children or for the ladies of the French court? Although he wrote stories that were already well known, Perrault used sophisticated language and a lyrical style which could have been lost on children.  They are also highly moralistic, particularly praising beauty and grace in women. Regardless of audience, Perrault’s little book became wildly popular, and his work served to immortalize these now-famous stories.