Collecting the Works of James Patterson

James Patterson is nothing if not a producer. His literary output is astounding, and the publishing schedule he sticks to is rigorous one (we've written more about his methods here). Patterson began his career in journalism. An avid reader, eventually he was turned on to the suspense and thriller genre through authors like William Peter Blatty and Frederick Forsyth. Thinking he could take a stab at writing such books, Patterson set about writing his first novel, The Thomas Berryman Number. After much rejection, Little Brown Books picked up Patterson's debut book.

Since then, Patterson has gone on to write hundreds of other titles. His inventory spans multiple genres including his well-known thriller series, stand alone thrillers, romance novels, and even books for teens and children. Today, we're highlighting several Patterson titles that are worthwhile additions to collectors of his work or fans of modern-day literary giants in general.

Interested in reading more about James Patterson? See below!

Born on March 22, 1947, James Patterson is an incredibly prolific author who mostly specializes in thrillers but also dabbles in the non-fiction, young adult, and romance genres. However, before he became a best-selling author with more than 95 titles under his belt, he worked in advertising. 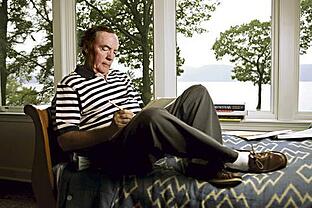 Born and raised in Newburgh, New York, Patterson moved with his family to Boston following his senior year of high school. There he got a job working as an aide at McLean Hospital in Belmont. Due to his night and weekend shifts, Patterson ended up with a plethora of time, in which he began to read in earnest. He developed into something of a literary snob, almost exclusively reading works by such authors as Jerzy Kosinski, Jean Genet, and Evan S. Connell.

However, after Patterson graduated from Manhattan College with a degree in English, he decided to forgo graduate school at Vanderbilt University and instead moved to New York City and got a job as a junior copywriter at J. Walter Thompson. While working there he began to read commercial books, things like The Exorcist and The Day of the Jackal, and his eyes were opened to books for the masses. Patterson said, “I always felt I could write a reasonable literary novel, but not a great one. Then I thought, I can do this. I understand it, and I like it.” So Patterson began working on his first novel. He spent nights and weekends hard at work on his typewriter to produce The Thomas Berryman Number, which after much rejection he finally sold it to Little Brown Books for $8,500. Read more >>